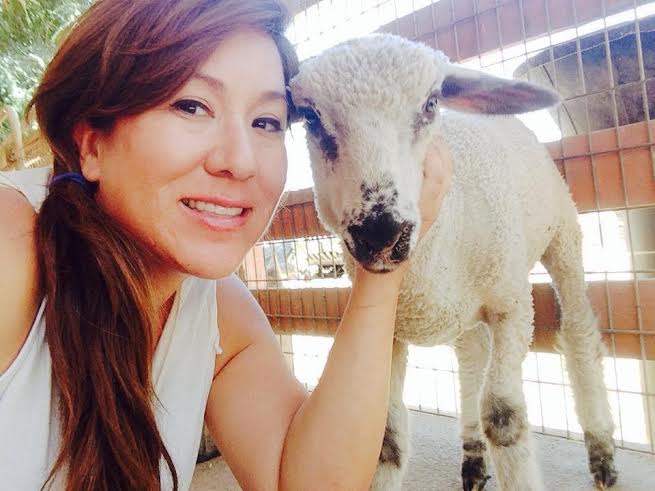 Courtesy of Linda Alvarez - Alvarez visits Farm Sanctuary's Animal Acres. She often takes her students on field trips to the sanctuary to meet animals that have been rescued from slaughterhouses.

Linda Alvarez, a CSUN professor in the Central American Studies department, picked up her love for animals at a very young age. She recalled the first time she rescued an animal. Puffy was one of many feral cats who lived beneath her family’s apartment structure. At the mere age of seven, Alvarez spent a lot of time trying to draw Puffy out of the dark crawl space by offering it milk until the cat realized it wasn’t in any danger.

“Sometimes that’s all it takes to gain an animal’s trust,” Alvarez said. “You have to be consistent and gentle.”

From then on, the family began a routine of rescuing defenseless animals, getting them spayed and neutered, and finding them safe foster homes.

Alvarez explained there were always animals around her household since her parents were passionate advocates.

The daughter of Costa Rican parents, she grew up appreciating animals. Her father missed the rainforest from back home, so in their old apartment in North Hollywood, he filled the space with plants, crickets and a soundtrack that gave off the illusion of living in a rainforest. The family has temporarily fostered chicks, parrots, iguanas, goats and even a turkey — the range of species not limited to the common house pet.

To this day, the Alvarez family continues to rescue and foster animals whenever they can. Along the way, they have made connections with many helpful resources that actively stand up for the rights and care of animals. Farm Sanctuary’s Animal Acres in Acton, California is a location that Alvarez visits fairly often. The farm rescues animals from slaughterhouses.

What Paniagua and Alvarez have in common is their love for rescuing animals from the streets.

“We’re like a tag team,” Paniagua said. “I call Alvarez to see if she has resources for the dogs I find.”

“She took us there so that we could see the animals who have been saved by slaughterhouses or that were about to be killed in other ways,” Gonzalez said.

Gonzalez admires how Alvarez practices what she preaches by making connections with the animals she saves.

Mrs. Flans, one of her dogs, is albino, deaf and partially blind. Alvarez explains that it is a side effect from the ignorance that often surrounds crossbreeding. Mrs. Flans is special, requiring layers of sunblock whenever she’s outside. Alvarez decided to keep her, knowing the likelihood of Mrs. Flans getting adopted was quite low.

“It shows a lot about society,” Gonzalez said. “How people don’t give a chance to those who are being affected by issues. (But with Alvarez) it’s all about having patience and being willing to give opportunities.”

Alvarez is also currently fostering a 30-year-old desert tortoise named Bert. He moves at his own pace, knowing how to get through the doggy door. He is able to comfortably coexist with his fellow foster pals. Alvarez always makes sure to safely introduce animals to each other and make sure they can get along.

Not being able to quickly find a foster home for the dogs they rescue is the biggest challenge they face. In Alvarez’s case, she uses Facebook as a platform for responsibly networking animals to get their stories out, to gain interest from people looking to adopt.

Alvarez, who teaches courses such as Changing Roles of Central American Women and Social Movement, believes in the participation in politics. Alvarez thinks of animal cruelty and negligence as not only a depressing issue, but as a reflection of social conditions in low income areas.

She is also the advisor for CAUSA and has seen the members grow in terms of taking social action and initiative in and outside of the Central American community.

“Everything we do affects every component that makes up our society and that is inclusive of animals,” Alvarez said. “We have to respect them as much as ourselves and others.”