ICYMI: ISIS and the issue of free speech 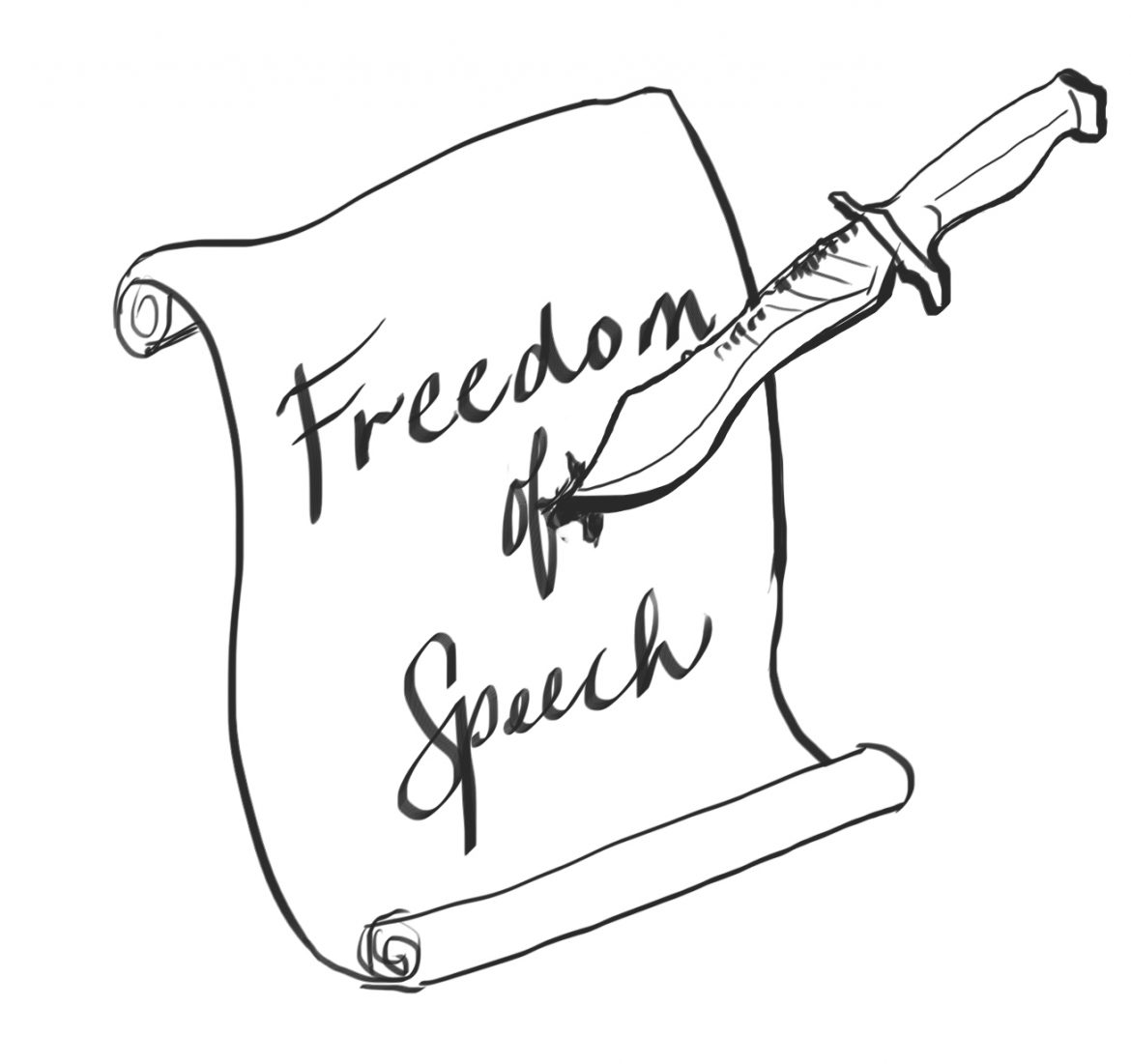 Given the now periodic headlines that instill disgust and anger, ignoring the Islamic State of Iraq and Syria (ISIS) is not an option.

The recent video released Oct. 4 (Oct. 3 in the US) shows captive Alan Henning, wearing Guantanamo-esque orange clothes. The British aid worker is kneeled beside the same reported executor, “Jihadi John,” from previous taped executions. After damning British airstrikes authorized by Prime Minister David Cameron, from a script, Henning’s life was snuffed out by the terrorist’s knife.

In following the videos of murdered American journalists, James Foley and Steven Sotloff, and Scottish aid worker, David Haines, Henning’s video ends with the threat to kill another captured American, Peter Edward Kassig. Unknown to the west, the next video will surely come as abruptly as the others.

These videos did arrive prior to Henning’s murder, surely but abruptly, in a propagandic farce on ISIS’s behalf with British captive John Cantlie. A similar video with Cantlie, who still lives, was released a week later.

It has come to my mind, after watching the full uncensored videos of Foley and Sotloff’s executions, that the scums from ISIS have played around with a fundamental American idea. Fully aware of how much weird stuff is posted onto the Internet on a daily basis, the presumption on ISIS’s side may be that it does not shock us.

Just think of all the film scenes and game cutscenes showing beheadings. Such scenes have desensitized us, and this stems from our right of free speech. Severed heads, gunshot wounds and dead bodies on screens are a usual thing. Obviously, this is real.

Here we have an ideologically perverse group of fascists attempting to bastardize our foremost freedom. We can condemn them for their sick actions. Then, further condemn them for what appears to be a sick joke of, what is to them, an alien concept.

I will always defend and support the pen of free speech, but I cannot appreciate anyone who makes a mockery of it. Especially from those who want a world of no free inquiry, no curiosity and no equality. This has made ISIS into a cruel hypocrisy.

I have explained before why I support President Obama’s airstrikes on ISIS strongholds across Iraq. I also support what Britain and France’s actions, given the videos that were direct threats to them. The strikes in Syria may prove useful in toppling ISIS’s leadership, but it could be too late, if they have already evacuated the country.

Generally Obama’s Syria policy, to quote journalist Nicholas Kristof, “has been a mess”. Going after Syria now just resembles a marathon runner who left the track and is still running.

Even that is unclear at this point. The War on Terror is not over, like it or not. But we should not send men and women in uniform back to Iraq. I would not be surprised if a covert ops mission was in progress right now to kill ISIS leaders and bring home the surviving captives.

But this talk is ineffectual. The “appetite” for boots on the ground exists, as blogger Paul Waldman pointed out. Readings and testimonies (a la Gen. Martin Dempsey and the potential of ground troops arriving in Iraq) are affecting my support for this apparent war effort. We simply cannot afford, by cost of lives and money, to go back to Iraq and redo the previous quagmire started by George W. Bush.

Even with the president’s repeated addresses of no ground troops, “I can’t get no relief,” to quote musician Bob Dylan (or Jimi Hendrix).

The left will send out (justifiable) cries of imperialism and American superiority. The right will just say Obama has not done enough. Action must be made. Diplomacy these days seems to never bear any cordiality.

Although arming the Syrian rebels may seem to be a proper cause to an observably abused people, thievery and deception persists. Arming the Syrian rebels will be, yet again, another reason why America loves to repeat history. We armed Afghanistan’s mujahideen in the 1980s so they could fight the Soviets. Years later, those same people followed the deluded path of bin Laden and began their holy war against the U.S.

The president cannot betray the trust of the American people by sending soldiers back to that failed state. If the airstrikes have been successful and continue to be successful, let them go on.

Let us not forget the videos that have been released are acts of terror. Being tech savvy has enhanced ISIS’s global reach. The Internet is a child of the right of free speech. Anyone and everyone literally has it at their fingertips to express their opinion and their voice.

My argument is not meant to say people of a twisted mind must legally be exempt from the Internet. The condemnation is when people use it for their sick pleasure.

Videos that exhibit acts of animal abuse or these beheadings only reveal one thing: There are still many people in this world who have sick delusions of authority. These people can only exert their power through violent behavior.

ISIS is a different strain of the same pretentious illness. They do this, simply, to instill fear and blind militaristic reaction. A point ISIS wants made: the United States is the source of their existence. They want our leaders to fall back down the path of eternal war.

For a period of time, I looked forward to the Obama administration’s global focus shifting to Asia. ISIS has pulled us back to Iraq, but for distinct reasons. Bush 41 and Bush 43’s mistakes in Iraq were more vendettas than conflicts.

Granted, our relationship with Iraq has followed the Michael Corleone admission from “The Godfather Part III.” Corleone, portrayed by Al Pacino, said, “Just when I thought I was out, they pull me back in.” (This was noted by journalist Maureen Dowd in her confusion about returning to Iraq.)

While I am a fan of this quote, I guarantee President Obama has been thinking this for months now.

In defending ourselves and defending our ideas, ISIS must go. They are not indestructible fighting men. Their militant, cult followers are not men of God or revolutionaries.

They are, as the late journalist Christopher Hitchens said of all jihadists, “psychopathic criminals with ugly delusions and terrible sexual repressions.”

ISIS can use our freedoms for their “gains.” Simultaneously, I can use those freedoms to censure their gross acts and not accept their invitation to live in fear.