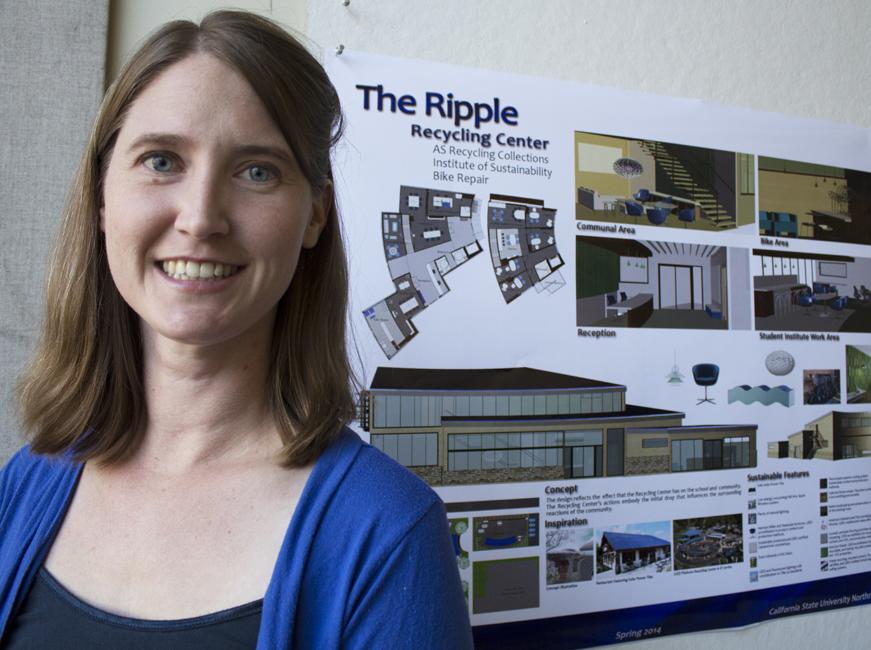 As an arts enthusiast, senior Julia Kirby, knew that her life was headed in the right direction when she picked up interior designing as her major.

Before Kirby won the 2014 People’s Choice Award at the 5th Annual International Interior Design Association student exhibition for her design of a recycling center known as The Ripple, she was trying to decide what major would change her life.

“I thought of majoring in interior design when I was shuffling around and trying different majors,” Kirby said.

Jumping around from major to major proved to be quite tiresome for her. After she transferred to CSUN from Pierce College, Kirby decided that interior design was something that she really wanted to do in life.

“I always liked the creative side of anything,” Kirby said. “When the idea of interior design came, I really got excited. I like using art and organizational skills to pull together an interior.”

It was the change of scenery that helped Kirby in deciding that she wanted to do something positive for the environment.

Kirby designed the award-winning piece while working on a class project at CSUN. Throughout the semester, Kirby and her classmates were asked to come up with a design for a final project. She wasn’t aware that this assignment would become the buzz around campus.

The making of her recycling center, known as The Ripple, was a difficult task to pursue. Kirby had to think of different concepts to get her project off the ground and running.

“In thinking of the concepts for my project, I like the idea of connecting the actions of this recycling center and the instituted sustainability to the rest of the community,” Kirby said. “The idea of The Ripple fit that.”

Kirby said there is no way this project would have taken off the way that it had without the help from her fellow classmates and CSUN interior design professor Rodica Kohn.

While creating The Ripple, Kirby had to think about the different visual effects and accents of the project. She also had to determine the placements and the size of the building. Some of the sustainable features included in the facility are water efficient plumbing systems, solar power tiles and low energy consuming liquid filtration systems.

During the project, there were times when Kirby would grow frustrated.
“It is definitely a different assignment than working on an essay,” said Kirby. “It gives you the same amount of frustration.”

Kirby’s hard work on The Ripple paid off and she was stunned to have won the People’s Choice Award.
“To see all the different work from all the other different colleges, from all the other students, it was very intimidating,” said Kirby. “There is a great amount of work and technical skill out there.”

“The environment is constantly changing and a majority of that change is made by us, be it good or bad,” said Pinkston. “The idea of The Ripple is helping us become one more step closer to making the environment a better place.”

Kohn believes the school offers a great interior design program for students where they can learn to become professional designers. She explains the close relationship between the interior design and architecture fields and the role they play in defining our environment, something Kirby put to use with her design for The Ripple.

“Both professions, which I see as an extension of each other, have an enormous influence on how we live, and how we experience our existence,” said Kohn.

Kirby hopes to continue creating interior plans that will go into action, as seen with her design for The Ripple.