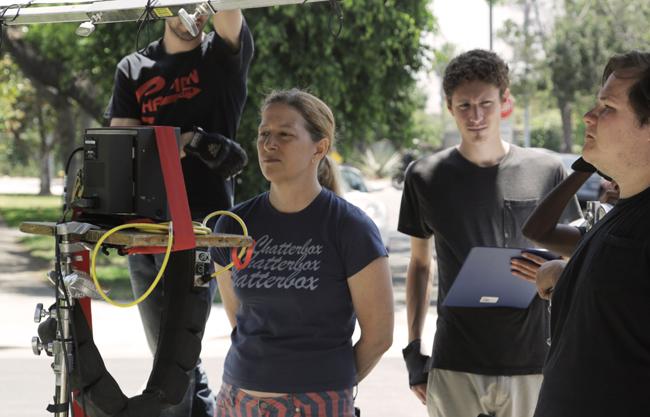 Students who are approaching graduation will inevitably find professional experience, whether it’s paid or not, is absolutely essential to reaching their career aspirations. You have to check off all the right kind of boxes and no field is more difficult to break into than the film industry.

As competition comes to a head, professional experience has never been more in demand. That’s why film production assistant professor Karen Carpenter chose to include students in her new short film, “You Try Living Here.”

“When I first moved to Los Angeles after film school I was very naïve and I didn’t really understand how difficult it would be to pursue a career as a filmmaker,” said Carpenter. “Suddenly there were so many people that wanted to do the same thing that I did and this realization created doubt in myself where previously there was none. I wrote a film based on my experiences from that time,” said Carpenter.

The short film, which began as a play and now adapted to film, is based on Carpenter’s experiences when she first arrived in Los Angeles to pursue a career in the film industry.

“I teach the introductory film production course in the CTVA department so I meet the students early on and even from this early stage I could spot the students who I could rely on to do a great job,” said Carpenter. “It was inspiring to see how much they had progressed from that first course. I was very proud of them.”

Now as an educator in an institute of higher education, she has begun to pull from the pool of emerging talent at CSUN and the American Film Institute (AFI).

Johanna Coelho, a graduate from AFI, was excited to work with new faces.

“I think it’s amazing when you bring schools together, you bring experiences together,” Coelho said. “Karen was an amazing director to work with. She has the ability to focus deeply on set and always knows exactly what is working and what is not. She always fights for her vision and in that sense, she is always able to get the best out of the story.”

Both CSUN and AFI programs fall into the top 25 film schools in the country, according to the Hollywood Reporter. Yet, it’s the hands-on direction that Carpenter offers, which is hard to find. Coelho still finds the value of working with an experienced professional in the industry.

“She has really good taste. I was impressed by the whole set design she had been doing for the shoot. I love her precision, and how she takes really good care of details and you can feel these qualities of her in her work,” Coelho said. “Every detail counts and it gives something very special to her films. She definitely masters her craft and has a beautiful way to tell her stories.”

Randy Kulina, senior at CSUN, is studying Film Production with an emphasis in Cinematography. He is graduating after the fall semester and is adamant that projects like these will help him break into the industry.

“Being a producer on ‘You Try Living Here’ was extremely valuable for me since it’s something I want to do for a career,” said Kulina. “I’m very serious about filmmaking and producing so getting the chance to produce a non-student film was huge for both me and my career.”

Kulina was a student that was high on the list for her film, both being familiar with each other’s work.

“I was a Producer on a senior thesis film last semester and Professor Karen Carpenter was impressed with how I was handling it, so she then approached me about working on her project,” said Kaulina.

Now Carpenter and her crew are looking forward to post-production work in the upcoming months, with the aim of sending the finished product out to film festivals before the end of the year.

“I’m currently putting the first cut together in order to make sure I have all of the footage necessary to tell the story in the way I intended. Next, I’ll have someone else take it over to polish it,” said Carpenter.

Kulina is still actively engaged in the post production process with sound belief that the film can make waves at film festivals.

“I check in with her quite a bit and we’re trying to figure out the next step in fundraising as well as our festival run,” said Kulina. “We’re interested in Rotterdam, Berlin, Venice, Toronto, New York and Telluride. Those are the top ones we really want to get into.”

However, at the end of the day, Carpenter stresses that the most important element is always going to be the individual’s commitment to their craft.

“There are so many people who want to do this kind of work, so having passion is key,” said Carpenter. “It provides the tenacity to become better- to work harder.”