Gracepoint starts out strong, but its longevity is questionable 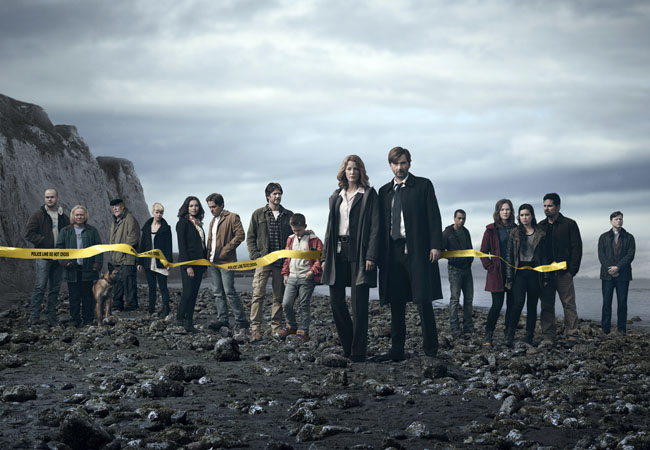 “Gracepoint,” a 10-part mystery series led by actors Anna Gunn (Breaking Bad) and David Tennant previously seen on BBC’s Doctor Who, will keep viewers guessing, but whether or not it will have any staying power on the network is a mystery within itself.

The show follows Detectives Ellie Miller (Gunn) and Emmett Carver (Tennant) as they try to solve the murder of 12-year-old Danny Solano in the fictional town of Gracepoint. In a town so small, a crime of such caliber has never taken place. Any resident could be a suspect.

While Miller and Carver try to find the murderer, as well as their stride as a duo, the rest of the town attempts to hold on to any personal secrets they may have during this vulnerable time.

“Gracepoint” is the U.S. adaptation of BBC America’s “Broadchurch” which also stars Tennant.

There has been some speculation about how closely “Gracepoint” and “Broadchurch” favor one another. However, Fox is not worried about the hearsay.

“Gracepoint” should be able to stand on its own, considering that most American viewers have probably never heard of “Broadchurch,” said Fox in an recent article by Variety.

Whether or not that is true, “Gracepoint” is still going to have to win viewers over.

Fox can probably count on “Breaking Bad” and “Doctor Who” fans to tune in and see how these actors fulfill their new roles.

You would think a young boy being murdered would stir up so many different emotions from the people of Gracepoint. Instead, there seems to be some serious disconnect from some characters.

There were moments where the emotions from some characters either seemed forced or just completely absent.

It would not be fair to chalk that up to sub par acting when you have such a highly talented cast, which also includes Michael Peña “End of Watch” and Golden Globe winning actor, Nick Nolte.

For the sake of argument, one could say the force or absence of emotions was done on purpose. Considering “Gracepoint” is a mystery, it can be anyone’s guess.

Despite the lack of empathy, every moment of the series will keep viewers guessing as to who the murderer might be and why they chose Danny Solano as their victim.

Viewers can expect many plot twists, as well as discovering the many secrets possessed by the citizens of Gracepoint.

If you like a good mystery, then this show is for you but don’t expect it to be the next “Doctor Who” or “Breaking Bad.”
“Gracepoint” will be premiering on Fox on Thursday, Oct. 10 at 9 p.m.