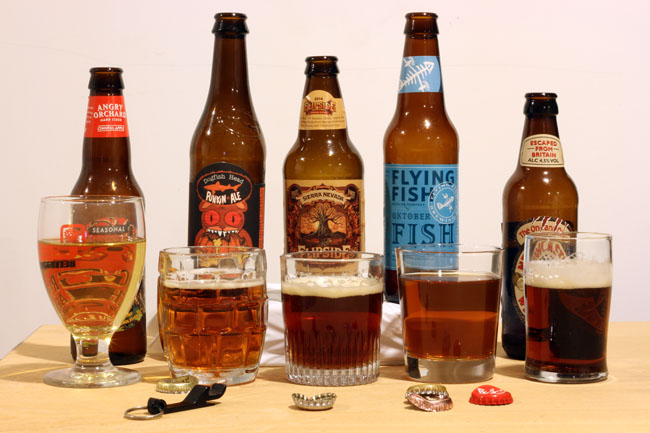 There is a growing fine line between seasonal beers and year round beers with permits of brewers increasing. Different specialty beers are available throughout the country. Photo Credit: Trevor Talan/The Sundial

The seasonal beer was not always the marketing ploy used by large beer manufacturers that it is today.

Long before the explosion of craft breweries drowned the American beer drinker’s palate, beer lovers could stray away from the mundanity of their everyday brew to enjoy a more seasonal spirit.

In a craft brewing culture where specialty beers can be found on a year-round basis, much of the tradition of making seasonal brews in the classic sense, has been lost. Now with nearly 4,500 brewery permits in the U.S. alone, according to the Brewers Association, the burgeoning craft beer industry’s endless supply of unique and interesting brands has blurred drinker’s thoughts on what is and isn’t considered a seasonal brew.

Much how the seasons dictate the colors, aromas and appearance of the natural world, so too have they dictated the ingredients, styles and methods of beers brewed. Before the advent of modern refrigeration, brewers were limited to cooking up their various recipes based on the seasonal temperatures.

The fact that we tend to enjoy lighter, more refreshing beers in the summer and heavier, more filling beers during the colder months is as much an expression of the season’s flavor palate as it is of traditional seasonal brewing cycles.

The “hoppier,” quick fermenting light grain beers of summertime did not require the low temperatures necessary for longer shelf life. While the “maltier,” higher alcohol content beers of winter did. Thus, spawning the seasonal brew’s special place in drinking culture.

In the spirit of resurrecting the true value of the seasonal brew, I have reviewed five of this season’s most popular beers and ciders to see if they stand up to the test.

This is no Starbucks pumpkin spice latte folks. Known for their bold and sometimes strange concoctions, brewer Dogfish Head’s seasonal Punkin Ale is no exception.

Brewed with actual chunks of pumpkin, brown sugar and spices, this apropos Halloween time brew is one of the few to embody the true spirit of the seasonal ale. Inspired by the breweries’ local southern Delaware fall tradition of “Punkin’ Chunkin,” where teams compete to build pumpkin launching catapults, Punkin Ale flings its audiences senses to new heights.

Upon pour, this ale immediately takes on the dark orange-ish amber glow that one would expect out of a pumpkin inspired beer. At first, the flavor has the harsh bite expected from many of Dogfish’s beers throughout the years, but the mellow finish makes it drinkable in moderation.

Although it wouldn’t be my choice out of the group to drink on a regular basis, Punkin Ale gets a nod for its ability to capture the essence of the season not only in flavor, but in tradition as well.

Although Angry Orchard Cinnful Apple falls within the realm of seasonal ciders, I chose to include the category because it has become a major player in the craft brewing scene. With production (and ultimately sales) in the U.S. up 265% between 2005 and 2012 according to the Beer Institute, the meteoric rise of cider is quickly gaining the same popularity it’s enjoyed since pre-Roman times.

In the glass, the Cinnful Apple cider takes on a nice amber color paired with a slightly tart aroma. The notion of tartness is lost upon first taste, as the spice of the cinnamon kicks in to give it a smooth and notable quality.

As a guy, I was slightly embarrassed to admit, and wholeheartedly surprised, in how much I actually liked this drink. As a major fan of much stronger, more full bodied beers like IPA’s and porters, it almost seemed like some sort of blasphemy to be enjoying the likes of a cider. But after tasting Angry Orchard’s Cinnful Apple, my opinions have been swayed.

In the spirit of Oktoberfest beers enjoyed during this time of year in Germany, Flying Fish Brewing Co. has introduced its OktoberFish for this celebrated season.

Dating back nearly half a millennium, the Bavarian origins of Oktoberfest-style beers have always earned them a spot in the seasonal lineup. Early on, Bavarian brewers capitalized on the frigid nature of the alps during the fall and winter months, finding the airborne microbes now known to spoil a beer’s taste could not survive.

This spawned a brewing frenzy between the months of October and March, where the full flavor and appetizing nature of their beers could be fully experienced.

OktoberFish uses European malts, hops and yeast to stay true to its Oktoberfest-style inspiration. With a nice red color and a lightly carbonated nature, I found OktoberFish to have a “maltier” taste, but still smooth enough to stay towards the top of the list.

India Pale Ales, or IPA’s, have gained huge popularity as of late in the craft brewing world, for their unique combination of mass amounts of hops and interesting variables, to create a highly alcoholic hybrid.

Sierra Nevada’s Flipside red IPA meets all those criteria and more. But what truly makes this a seasonal beer is the company’s reputation for strict seasonal releases. Once it’s gone, it really is gone, until next year.

For me, Flipside came in a close second place behind Cinnful Apple based somewhat on my bias towards IPA’s, but also because it tastes less floral and intense than most, thus, making it a more appealing crossover for regular beer folks.

Newcastle’s Werewolf Blood-Red Ale has the clever seasonal title appropriate for mass sales during this time of year. But aside from a name, it’s purely lacking in both taste and tradition to be considered a true seasonal beer.

I was really disappointed by this release because Newcastle has always earned a solid place in my beer drinking endeavors. The rich flavor and drinkability of their Brown Ale, in unison with a reasonable price point, steered me toward sampling the Blood-Red in hopes of similar results.

What I got was a bitter flat taste with none of the full finish I’ve come to love in Newcastle ales. Sadly, this one goes at the bottom of the list, for its vain attempts at capturing the spirit of the season and it’s apparent absence of any inspired flavor.

To get into the drinking spirit of this season you can find all of these brews, alongside many others, at your local BevMo or Total Wine.