Coroner rules on Villa’s cause of death 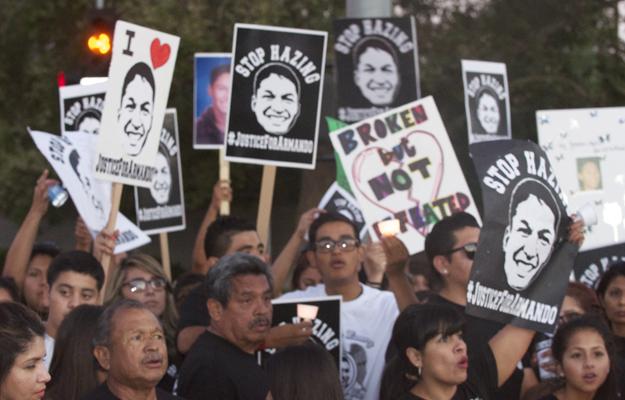 Family, friends and supporters of Armando Villa held an anti-hazing rally in July. Today the coroners report ruled Villa's death was do to dehydration and hypothermia. Photo Credi: Pete Camarrilo/ The Sundial

The death of CSUN student Armando Villa, who died after a fraternity activity this summer, was determined to be a combination of dehydration and hyperthermia by the Los Angeles County Department of Coroner.

In the report, it was concluded that 19-year-old Villa’s death, on July 1 while hiking in the Angeles National Forest, was accidental.

It was alleged by Villa’s family that his death was a result of hazing. They claimed Villa, a pledge of the Zeta Mu fraternity, was deprived of water and forced to walk barefoot as an act of initiation into the group.

The coroner’s report coincided with CSUN’s investigation that the group ran out of water while hiking down the mountain and there was no evidence of foul play.

His death was initially suspected to be a homicide but was changed to an accident in lieu of the autopsy, according to the coroner’s report.

Villa appeared to be in good shape, and toxicology showed there was no evidence of drugs or alcohol in Villa’s system.

The fraternity set out on its final initiation trip early that morning and ran into complication on the way back, according to CSUN’s private investigation.

At some point during the descent, Villa broke off from the group and was later found along the side of the road in dire conditions.

Villa had a body temperature of 108 and numerous superficial scratches on his body, including blisters on his feet, according to the autopsy report.

Upon finding him, fraternity members removed his shoes and attempted to revive him, according to CSUN’s private investigation.

The Los Angeles County Fire Department responded to the 911 call and transported Villa by helicopter to Holy Cross Medical Center in Mission Hills, according to the autopsy report.

He was pronounced dead at 6:04 p.m. at the hospital, according to the autopsy report.