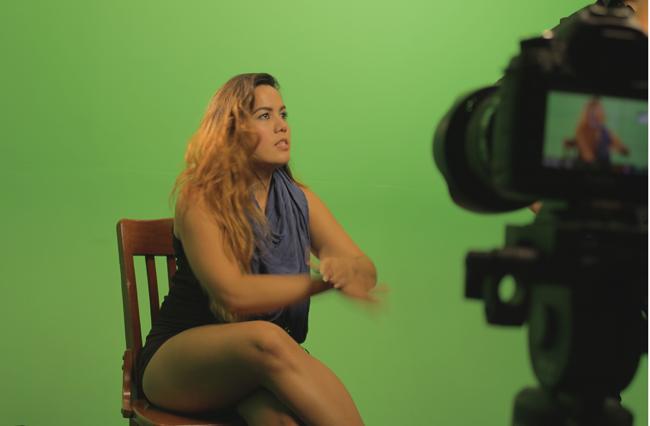 Students from CTVA work on their senior film projects. Shoots in the green room is part of their production process. Photo Credit: Victor Obietikponah/Contributor

For the fall semester, the faculty and staff of California State University, Northridge CTVA Film Production department chaired by the Emmy award winning director, Professor Nate Thomas has selected four great scripts to serve as senior thesis shots which are to be made into four shot films and screened at the annual theater showcase. As the modern long tradition of the department, the four scripts where selected from the fall semester senior class in the CTVA Film Production program and are helmed by the writers of the scripts who are also slated to direct the individual shot films. The script selections are as diverse as the individuals who wrote them, dealing on different topics and different genres with such titles as; ‘Corre’ written by Elmer Zelaya, a story that deals with and exposes the dubious world of sex trafficking; ‘The Death of Colm Canter’ written by Revati Dhomse, a western; ‘Frequencies’ written by Sahar El – Ghali and Amy El Ghali, a science fiction mystery and the burden of being an elder brother ; and ‘Beneath the Neon’ written by Brandon Harris, a story about a young man’s quest to discover who his biological mother is and who has doubts about on how to progress as a young father . As the projects entitles, the students are to be baptized by the rigorous industry standard process of filmmaking, in the quest to deliver tasteful movies that could satisfy most audiences. Students in the program gets the opportunity to plug themselves in and take on the mantle of different roles of filmmaking such as the Producer(s), Editor(s), Director of Photography, Sound recorder and mixer, Assistant Director, Set Designer, Art Director, etc. This is the time where the students take on many responsibilities and put into practice the lessons that they have learned from different professors and mentors from pre-production to post-production. During the process, however, the students are not left out to dry in the heat and pressures that come with the art of filmmaking as they are guided by the staff and faculty as well as guests like the famed Hollywood director Donald Petrie, leading them through some treacherous corners and helping them solve some challenging tasks.