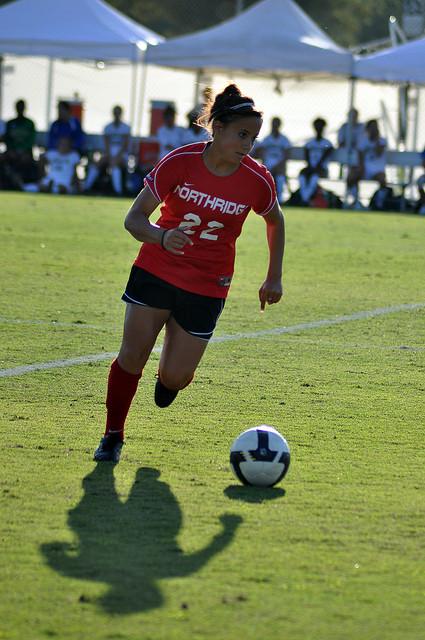 “We expected to do a lot better than we did in preseason, but overall, as a group, we did pretty well. We grew much more than we did last fall. Our wins are coming,” said sophomore forward Cynthia Sanchez.

With a Sunday night 1-0 loss to Loyola Marymount, the Matadors ended an 11-game non-conference campaign that saw them run a gauntlet higher ranked teams highlighted by confrontations with No. 15 ranked of Kansas, No. 21 ranked Utah and No. 30 ranked Missouri.

“I’ve been told to watch my scheduling cause it gets too hard sometimes. But if we could play No. 1 through 10 every preseason game, let’s go for it,” said Head Coach Keith West. “The only way you’re going to be the best is to go play the best.”

Throughout non-conference play, the Matadors have stood firm in their own third allowing 1.2 goals per contest and recording four clean sheets, but were ultimately undone by an attack that shot true just eight times and were shutout in 7 of 11 contests. The team has scored once on the road.

“We all know, and are figuring out, that we don’t always have to have the perfect shot. We just need to take a chance,” said Sanchez.

“I was a finisher. I wasn’t a very creative finisher, but I was a finisher. Players cannot be afraid to fail. You have to have the courage to fail, because you generally will fail more than you succeed,” said West.

Matador coaches believe that four wins will carry them into the conference tournament. Since 2007, fourth seeds have averaged 14 points (4 wins, 2 draws), but in 2013 California State University, Fullerton snuck in with 11 points (3 wins, 1 draw).

The team plays 3 of its 4 home games within an eight day stretch from October 12 to October 19. Given their inability to breach opponents on the road, the teams post-season aspirations could hinge on these early, compacted string of home games.

“I definitely think they’re all beatable. I know that there are players that are talked about nationwide in our conference, but I don’t think there’s anyone that we can’t stop,” said junior defender Kendall Moskal.

If the Matadors are unable to run the table at home, they’ll be forced to accomplish something that has eluded them since September 2013. They will need a road win. The Matador road woes are striking given that, since 2011, home field advantage in the Big West Conference play is a mirage. In the last three seasons, hosts have prevailed in only 52 percent of conference matches.

To secure their four wins, the teams believe it needs 10 goals.

“I think we need get at least ten goals in conference. At least. I know that our defense is very hard to get through. Ten goals. Definitely,” said Sanchez.

Even without improving their shot rate, the Matadors can meet and exceed their scoring aspirations by bringing their scoring rate (percentage of shots producing goals) up to the conference average of 10 percent.

“We’ve got good pace. We’ve good soccer. We’ve got everything going,” said West. “We concede nothing.”

West believes that the early season trials steeled his young squad, and against like competition, the Matadors now hold advantage.