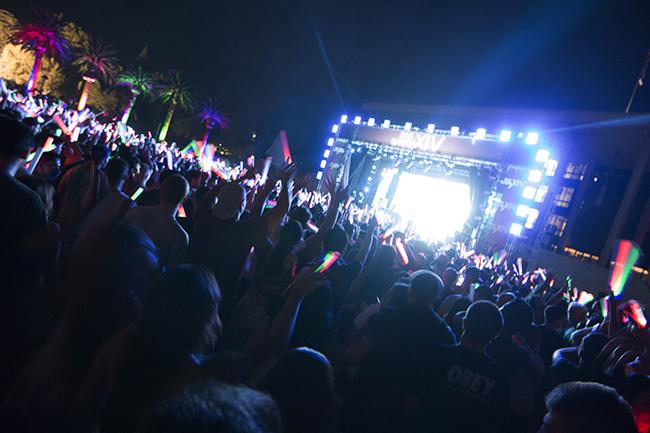 CSUN danced all night to the music of Laidback Luke and DVBBS at Big Show XIV on Oct. 4, 2014 on the Oviatt Lawn. Photo credit: Trevor Stamp/ The Sundial

Despite minor technical difficulties in the opening set, this year’s Big Show, featuring EDM artists Dvbbs and Laidback Luke, was a massive success for CSUN students Saturday night in front of the Oviatt Library.

Filled with glow sticks, flashing lights, and blacklight paint, students danced during the annual music event and were as hyped up as the artists were.

“People said last year’s Big Show was like a rave, and I’m expecting that tonight,” Maldonado said who hoped to see a much more exciting show.

The surround sound experience of electronic music mixed up with the stage’s light show was absolute bliss and pretty much in-your-face action.

Dvbbs drops and thumping bass in his songs had the audience dancing non-stop. His music was so incredible that the soundsystem shut down for about five minutes. But that didn’t stop the DJ from turning up and hyping the crowd more and more.

As Dvbbs bowed out and paved the way for the main headliner for the night, guests departed from the stage and took a short break from the crowd. Almost immediately, Laidback Luke came on-stage and had the crowd going again.

With mashups of Oasis’s “Wonderwall,” Queen’s “We Will Rock You” and remixes of the “Circle of Life” from the Lion King, the DJ held his very own party in the Matadors’ backyard.

For Niklas Petersen, a senior business major, the night was superb.

“The show is awesome and the environment is great,” said Petersen, “but I wish the visuals were better because they are too repetitive.”

The audience felt like they were part of the show as they swung their glow sticks back and forth. Concert-goers received the glow sticks from Associated Students (AS) volunteers. That was AS coordinator of marketing and public relations Kevin Mojaradi’s intent with the show.

“We wanted the students to enjoy the experience,” Mojardi said. “We looked at how students liked the experience last year and looked to improve on it.”

AS expected a 9000 student capacity for this year’s show. Mojaradi said about 8500 tickets were sold as of Thursday. The volunteers were pumped up before the show started, most of them enduring their second stint at a Big Show. For volunteer Ashley Velasco, a sophomore computer science major, it was her first time at the event and she was blown away.

“It’s a great turn out! The artist was better than I expected,” Velasco said, who helped out at “the Rabbit Hole,” a tunnel wrapped in Christmas lights that gave a 3-D effect for students walking through the attraction with 3-D glasses on.

Velasco had a pretty busy night at the tunnel, one of the many attractions that was on the Oviatt Lawn. There were three-point shooting games, a studio photo-booth and the usual wall of paint where students showed off their artistic skills and had their work presented with a blacklight.

“The tunnel was really busy, and we even started several conga lines when it started getting crazy,” Velasco said. The volunteer experience gave the freshman higher hopes to going into AS production thanks to the event.

William Watkins, CSUN vice president of student affairs had a kick out of the night’s festivities. Watkins ended up enjoying the music more than he expected, and thought the light show was amazing.

“It’s great to see the crowd get into the music and the environment is spectacular.” Watkins said. “The music brings a lot of students from different backgrounds together. It’s nice seeing everyone enjoying themselves and partying with the music. ”