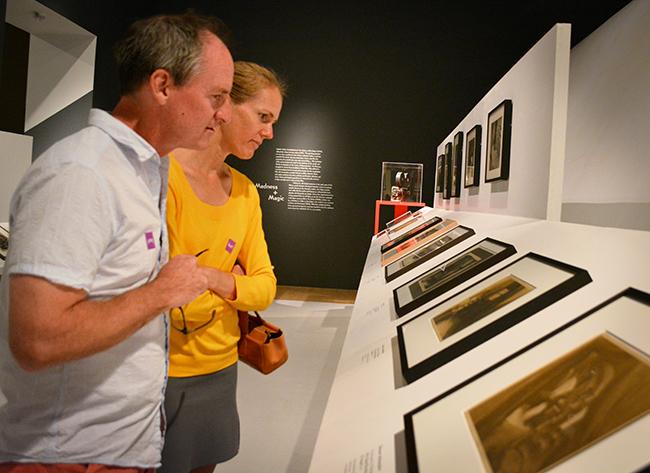 Mark and Aija Gibson, from Los Angeles, visiting the Haunted Screens: German Cinema in the 1920s exhibit at the Los Angeles County Museum of Art October 3, 2014. The Exhibit will be on display till April 26, 2015. Photo Credit: Patricia Perdomo/ Contributor

Artistic expressionism is often a radical prospective on the creators surroundings- be it an ominous state of torment or a blissful flash of elation. The duality and conflicting nature of human emotions have been the driving force for artistic revolutions for ages. But every now and then a single movement surfaces, changing the direction for subsequent generations.

The Los Angeles County Museum of Art in collaboration with La Cinémathèque française, Paris recently opened Haunted Screens: German Cinema in the 1920s after more than two years of planning.

The exhibit is a visual collaboration of multimedia including film clips, movie posters, photographs, audio clips, design drawings and manuscripts– most of which are as uncanny as the age they reflect.

Upon entering you’re met with a stark white wall and domineering text of the exhibition’s title, while the freezing temperature seemingly whisks you away to a dream world. A blanketing soundscape of soundtrack layers, muted droning and periodic outbursts of human shrieks and sharp organic notes beseech you, as a fright tape in a horror house might.

The cacophony of sound resonating from massive hoods resembling ventilation shafts will catch you off guard coinciding with the harrowing nature of these films.

These priceless production pieces from iconic directors such as Fritz Lang, F.W. Murnau, Robert Wiene and G.W. Pabst aren’t just for film purists to drool over. The set designs and other handcrafted relics of the era are as haunting and magnificent to the untrained eye as they are to an industry veteran, specifically the detail and intimacy of these rare pages.

Visual displays attract newcomers to the genre that helped inspire the progression of horror, Film noir and science fiction, but also share some of the movies’ most classic and iconic scenes.

A brief history lesson sheds light on German citizens and their skepticism during this dynamic political transition.

After the collapse of the Kaiser’s imperial government in 1919, Germany found themselves on the cusp of implosion, with the reparations from the Treaty of Versailles weighing heavily on the reinvented nations shoulders.

Director Fritz Lang described the times as a fragile liberal democracy that replaced the Kaiser’s imperial government in 1919 and ended with the rise of National Socialism in 1933.

The chronological continuation represents this exhibit best. The photos are neatly arranged in sterile white gullies separated by rolling caves of darkness where clips from films are screened on projection screens-each as captivating as the next.

Side installments also explain the evolution of sound during these times and the effectual use in which it was utilized during live showings, even if some of the original scores have been lost after 1933.

Classic equipment is also on display, providing a practical understanding of the conventional equipment of that time and the limitations that accompanied such productions.

The highlight of the exhibit has to be the collection from Lang’s “Metropolis.” It encapsulates the genre in its entirety; fusing booming urban settings, the fantasy of science fiction, the wrath of malevolent villains, the sacrificial tragic hero and the hopelessness of a dystopian society.

This picture is often described as the culmination of Germany’s Weimar zeitgeist.

Towering over the metropolis finale is a replica of one the work’s machine-humans, mounted like the trophy kill of a proud big game collector. In addition to a separate section dedicated to a singular piece, the original cut is playing on a large screen in its entirety, including additional footage that was discovered in an Argentine museum in 2008.

A final installment, Kino Ektoplasma by Guy Maddin, Evan Johnson and Galen Johnson, is tucked away and provides a modern change of pace. The shadowy room is a morphing composition of faces from the expressionist era transitioning to ominous scenes of nature. It’s captivating flow brings time to a standstill.

“Cinema is a haunted medium, a projection of people places and things not really present” said Maddin.

Whether you’re a fan of the genre, a film or history enthusiast, or just looking for a cheap date this Halloween, check out this exhibit. It’s well worth the price of admission.