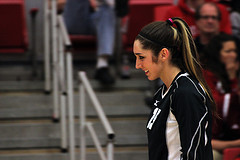 After four sets, the Matadors took a 1-3 loss against the Long Beach State University 49ers on Saturday.

Leading the team was outside hitter Cieana Stinson with 14 kills and a hitting percentage of .289 while middle blocker Casey Hinger completed 14 kills and eight digs. Outside hitter Danetta Boykin added 10 kills.

Long Beach took the first two sets at 25-20 and 25-16, respectively. The Matadors were more dominant in set three.

The third set was started off with back-to-back points for each team. The Matadors were able to get a significant lead after kills by Hinger and Boykin that were assisted by setter Steffi Miller. Those kills brought the score to 22-19.

The Matadors kept the lead and a kill by Natalie Allen ended set three with winning score of 25-20.

The celebration was cut short after the fourth and final set. The Matadors started off strong with a 5-0 lead until Long Beach took the lead back during a 4-0 run that set the score to 7-5.

Following a kill from LBSU’s outside hitter, Sophie Bukovec, the 49ers were able to get up to a 4-point lead during a portion of the game that brought the score to 18-22.

The 49ers’ 4-point lead returned later on in the set at 24-20 after a kill was completed by LBSU’s setter Jenelle Hudson.

A Hinger kill and an attack error by the 49ers shortened the lead to two but that was not enough to keep Long Beach from being victorious.

The fourth set ended with a score of 22-25. Despite the loss, Miller ended the game with 39 assists. Miller and libero Kelcie Randazzo each had a team-high of nine kills while Randazzo served the only ace made during the game.

The Matadors’ first home game will be on Friday, Oct. 10 against the No. 24 Hawaii at 7:30 p.m. Fox Prime Ticket will be televising the game.