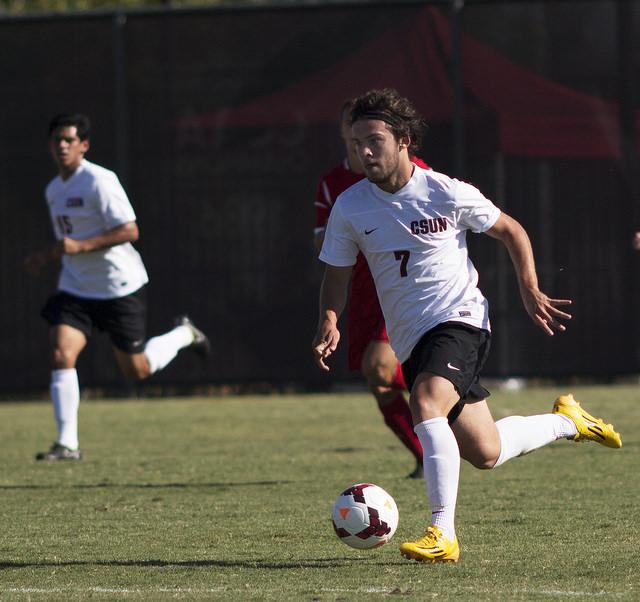 A late equalizer was not enough as the Matadors (4-6-1, 0-2-0) slipped to a third consecutive loss and their second of Big West conference play after losing to the Cal Poly Mustangs (6-2-3, 1-0-1)  2-1 in overtime Sunday afternoon at Spanos Stadium in San Luis Obispo.

Junior midfielder Marino Peixoto scored his first-career goal to tie the game in the 88th minute and sent the game into overtime, but the Mustangs quickly scored the game winner two minutes into extra-time.

The Matadors had plenty of chances as the match went on, with seven shots on target to the Mustangs four. By halftime, CSUN led 10-4 in total shots.

Their first chance came in the 27th minute with a shot from sophomore midfielder Nicolas Camacho that ricocheted off the Cal Poly keeper, only to have Peixoto shoot the ball over the post.

The deadlock was broken in the 56th minute after a shot on goal from junior defender Trevor Morley. The Mustangs were able to beat junior goalkeeper Adam Hobbs and scored in the left corner of the net.

The Matadors equalized just before the end of the match to send it to extra-time. Senior forward Edwin Rivas launched a pass into the box that found Peixoto who chipped it over the goalkeeper for his first-career goal.

Senior forward Sagi Lev-Ari nearly notched the game-winner 22 seconds after the equalizer, but his shot hit the post, and the game was sent to overtime.

The Mustangs scored the game-winner with their first chance in extra-time and handed the Matadors their third straight loss.

The Matadors will return home to host Sacramento State Thursday evening at Matador Soccer Field, with hopes to put an end to their losing streak.