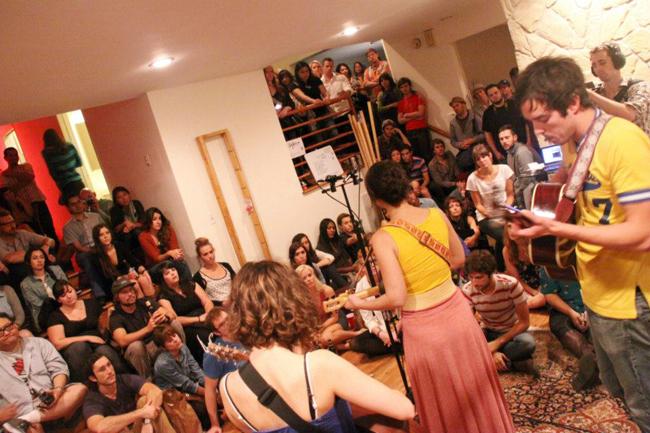 You scream your drink order to the bartender for the second time as you hear your favorite band start their set. You’ve now got to make your way through the crowd without spilling your drink, in hopes that your spot is still saved. Then you notice that a 6-foot-tall man is standing in front of you, blocking your view. So you move a bit to your right, only to find a sea of iPhones trying to capture every second of the show, ruining your chance to live in the moment.

Can’t there just be a way to enjoy your favorite band without all of the nonsense? The answer could be in your own backyard.

Sofar, an acronym for Songs From A Room, is a live music event that claims to be “Bringing the magic back to live music.”

Sofar is described on its Twitter account as “a movement bringing music lovers together in an unusual setting, often in a living room.”

In essence, a volunteer in the community decides to host a night in their home or unique space. Once the space is acquired, local bands play for free, and in return they get an attentive audience free from outside distraction.

The entire Sofar team is volunteer-based, though they take donations on event nights to give money back to the photographers, videographers and editors who work to capture the event digitally. The idea is to keep the focus away from big business record labels and focus on talent.

Monina Castillo, public relations for Sofar L.A., who is also a CSUN alum, said the company started in March 2009 in a London flat. When founders Rafe Offer, David J. Alexander and Rocky Start became frustrated about musicians getting lost or not heard in the standard live music venue scene, they took it upon themselves to create something more intimate.

“They wanted to create an atmosphere where people would truly listen and give respect to the music that was being played,” Castillo said. “From London, it quickly spread to other cities and is now global.”

Castillo said that one reason Sofar is so popular is that the invite-only list is mostly everyday people and not just industry insiders.

“People get a chance to participate and be part of something special,” Castillo said. “The wait-list is a bit daunting, but we make a conscious effort to make sure everyone who wants to attend eventually gets to. We try to maintain a sense of inclusion, which is rare in a town like Los Angeles.”

With Sofar, there are also no waiting lines to get in the door and no crowded bar to overpower the set.

“Sofar is a music experience between bands and music fans that you just don’t get from going to a show anymore,” said Robin Westlund, Sofar L.A. host coordinator. “Everyone pays attention to the music instead of their phones or talking over the bands.”

Westlund said that the only time phones are acceptable is to promote the band via social media, while incorporating hashtags and Twitter handles about the event.

So how exactly does someone find out about a show? And what exactly can you expect?

Westlund said that people who want to attend should register for the wait list via the main Sofar Sounds website. Dates for the shows are sent at the beginning of each month, which have grown from one to two per month due to demand.

Selected guests will be notified of the location only a few days before the gig, but they won’t know who is playing until they arrive at said secret location. Everyone squishes into the living room or selected space which holds 70-150 people and usually listens to three bands play five songs each.

The shows are streamed live and videos are edited later for promotion of the bands on the Sofar website.

“Sofar is a great way to get to know some new bands and see them in a way you wouldn’t typically see them,” Westlund said. “But going to a show has the benefit of being plugged in. Also it’s great to see a band do a Sofar show and then go support them at one of their gigs around town.”

Ami Cohen, a CSUN alum who has attended about 10 Sofar shows, including one in Berlin, found his Sofar experience to be one of the most intimate shows he’s attended.

“As an avid music lover, I tend to go see live music once a week and L.A. is great for that,” Cohen said. “But once a friend opened the door into the Sofar experience, I started to enjoy music from a different perspective. All the focus is on the lyrics and the stripped-down sound.”

The bands that play at these events are discovered by a Sofar team member, or can submit audition videos on the Sofar YouTube channel to be chosen to play a show in their home city.

Through these Sofar productions, musicians receive a lot of exposure. These gigs have boasted past bands such as DeVotchKa, Grizfolk, Holy Child, The Colourist, and even Bastille, whose hit “Pompeii” hit number five on the Billboard Hot 100 chart in 2013.

“One of my favorite shows was seeing Hunter Hunted singing a Pixies cover in a small back room recording studio at a venue on Pico Blvd,” Cohen said. “Can’t wait for the next one.”