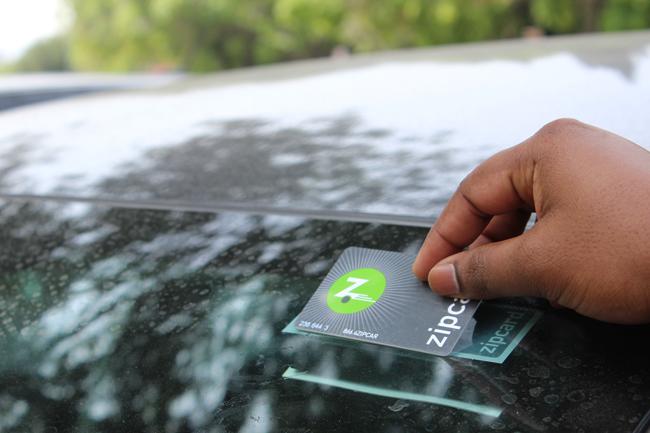 Samuel Boppuri, electrical engineer grad student, made a reservation to use the Zipcar Saturday morning. Placing the zipcar card on top of the zipcar sticker unlocks and locks the car. The Zipcars do offer their services on weekends.

CSUN has added two more Zipcars, located between Parking Lot G3 and the the Student Rec Center, due to popular demand.

The initial two cars are located in the F10 parking lot near the dorms, as students living on campus were the main focus for the program that launched on the first day of the spring semester in 2014.

Zipcar is a ride-sharing service that has some rethinking vehicle ownership.

Students, faculty, or community members can reserve the cars ahead of time via website, phone or mobile application to ensure availability.  The $7.50 to $8.50 hourly rate includes gas, insurance, and maintenance assistance.

CSUN senior Michaela Speaks said, “I didn’t even know they had this at CSUN, but it would be very helpful to students.”  Speaks added that she thought the price was very good for the service.

Others have taken to social media to share their positive experiences, like student @ericaswallow of Manhattan, New York, who tweeted, “Oh no!  Move-in day!  Dormroom shopping, here we go! @Zipcar saves the day!”

I actually had no idea that this was even a program,” Priya Mockeri did a little bit of web searching on zipcar and i do think its a good idea; there are many international students on campus who might need access to a car if they are trying to go search for a job, go to church/temple, or to any location that is based off campus.

Zipcar has seen massive growth lately both inside and outside the university system.  The website boasts around 870,000 users globally and cars can be found on more than 350 campuses nationwide. A Zipcar is also reported to be reserved somewhere every six seconds.

“Zipcar’s growth on the CSUN campus is a testament to how the campus community is readily embracing car sharing,” said Jeff Shields, general manager of ZipCar Los Angeles. “With Zipcar’s ‘wheels when they want them,’ CSUN students can avoid the cost and hassles of bringing a car to campus and enjoy the excitement of going to school in a vibrant city like L.A.”

Kenneth Premo, manager of support services at AS, had been pushing Zipcar for a long time in order to give students more choices, especially after successes on other Southern California campuses.

UCLA has grown to nearly 30 cars now on campus since announcing their Zipcar partnership in 2009. USC has almost 40 cars.

“The president [Dianne F. Harrison] has mentioned it in her last two public addresses, because she thinks it’s going so well,” said Premo.

Premo said the push for more cars started this summer when both cars at the CSUN campus were being rented almost 12 hours per day.

“So if that was a time when we didn’t have as many students on campus and usage rates weren’t falling, then they weren’t available enough,” Premo said.

Premo gave a lot of credit to the success of the program to student housing.  He said that parents of incoming freshman were always calling to see if their students needed a car.  Beforehand, they could only point to public transportation in the area.

“My biggest concern is that I don’t want students to get disappointed that they can’t get one,” Premo said. “So that’s why we’re trying to move so quickly to add more cars.”

CSUN is already in talks with Zipcar to add another two cars for a total of six on campus, perhaps even before the end of the fall 2014 semester.

“Zipcar is so excited and so happy about the reception of the program, that as long as we provide parking spaces and have the usage, they want to provide as many cars as we need to support it,” Premo said.

He said that students really “get it” and believes this generation likes things on demand.  They don’t like to pay for time they are not using, and they understand the need for alternative options.

As for the people that say the cars will not make a big difference for students, and that a few cars won’t help 35,000 students, Premo said that everything is a work in progress.

“Of course this is not going to make a big dent in the traffic problem in eight months,” Premo said. “It will make a larger and larger dent as it expands. There is not one easy answer to the problem,” Premo said.  “But we have tripled the program in less than a year.”

Zipcar’s site also states: “50 percent of Millennials surveyed by Zipcar say they would drive less if other transportation options, like public transit and car sharing, were available in their area, with 35 percent reporting that they are actively seeking substitutions for driving.”

“We want people to be sustainable and green.  We want them to have choices and think outside the mainstream idea of transportation,” said Premo.  “We’re just trying to make it a little bit easier.”