Cyclists rule the road at CicLAvia 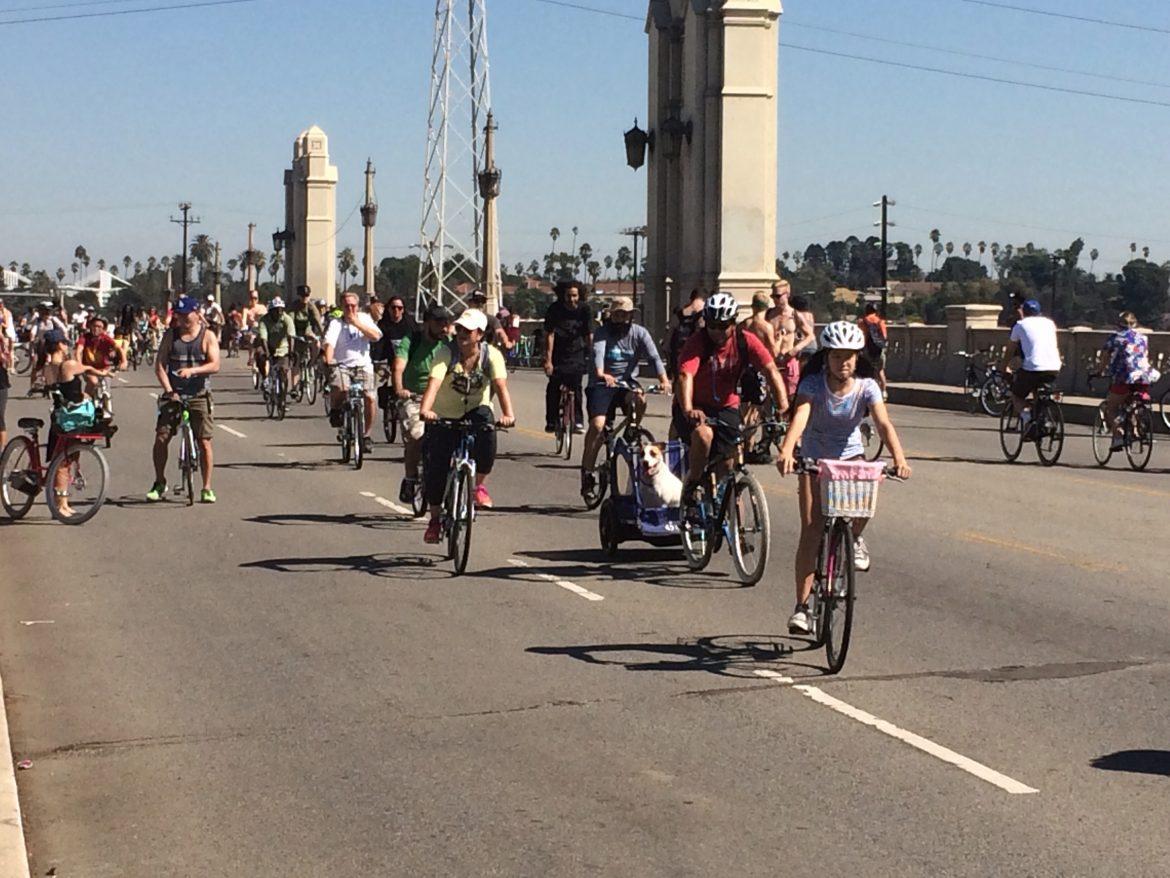 Thousands took to the streets of Los Angeles on Sunday for CicLAvia, a free event meant to encourage people to use non-motorized transport to get around the city.

Streets were shut down over 10 miles of roadway through parts of downtown Los Angeles, Boyle Heights, Echo Park, and East Los Angeles. The route was named “Heart of L.A.”

Participants using any non-motorized transport were allowed to start wherever they liked along the route from 9 a.m. to 4 p.m. The route had no official start or end point.

“It’s definitely changing people’s mentality that L.A. is a car-centric city,” said Mariana Perez-Seda, an event production assistant for CicLAvia. “Not only is it just about cars, but to expose people to new neighborhoods they might have not explored. Just making people aware of different cultures and communities and activities in their own city.”

Perez-Seda said this is the second event this year after April’s CicLAvia route down Wilshire Boulevard. She said the third event will be a new route through South Los Angeles on Dec. 7.

“Next year, we have four routes planned, so we’re trying to build each year,” said Perez-Seda. “Ideally, we would like to have one every single month, but we just don’t have the infrastructure for that quite yet.”

Producing each event with LADOT [Los Angeles Department of Transportation], L.A. Metro and LAPD takes at least two months of planning, according to Perez-Seda, including the planning of new routes and the hubs along the way.

“I think the mayor said he wants it to be every Sunday like it is in Colombia,” said Perez-Seda, referring to the city of Bogota, where CicLAvia started over 30 years ago.  “It just takes public backing to do that.”

CSUN freshman Katie Martirosyan volunteered her time for the event in order to take donations at one of the many tents set up at the Mariachi Plaza hub.

“I think it’s cool meet all these people who have been coming for so many years to this event,” Martirosyan said. “It’s not like they come once.  It’s something they’ve been doing for a long time.”

Many business owners along the route stayed open, either promoting their companies or selling water and snacks to the participants.

Some residents hosed down passing participants with water in the 90-degree-plus heat.

The temperatures, however, did not seem to affect attendance. Though there is no official number, some think it could be anywhere from 50,000 to hundreds of thousands.

Perez-Seda said this would be the first event with tracking devices, counting the number of people passing by checkpoints each hour, so a more precise report of attendees will be available soon.

The CSUN Bike Collective, which invites both students and community members to join, added a few participants of its own.

Clarke Miranda, a representative and member of the Bike Collective, said that many of the club’s riders were preparing to meet at CSUN before the CicLAvia event and ride from Northridge to downtown.

Miranda said that the CSUN club promotes many rides within the community and also provides bike repair on campus to help some students get mobile.

“We were trying to get a bike co-op going, but nothing yet,” said Miranda.  “Hopefully soon.”

Other bicycle co-ops have proven successful in California. City wide bike-sharing programs, such as Citi Bike in New York, have also shown great previous success, but have been slower to catch on in Los Angeles.

However, many don’t realize that California actually holds the third place spot for the state with the most miles of bike lanes, currently at 463 miles.

Though only one percent of Angelenos are said to be bike commuters, there are close to 3.9 million people in the city, which means a lot of people are paying attention to this green movement.

“The health benefits are immense,” reads the CicLAvia introduction on the official website.  “Our streets are congested with traffic, our air is polluted with toxic fumes, our children suffer from obesity and other health conditions caused by the scarcity of public space and safe, healthy transportation options.”

“It’s just an amazing way of meeting neighbors, seeing communities, getting out there and falling in love with L.A.,” the mayor told the Sundial.

Garcetti said he’s been attending the CicLAvia event since it began in Los Angeles in 2004.