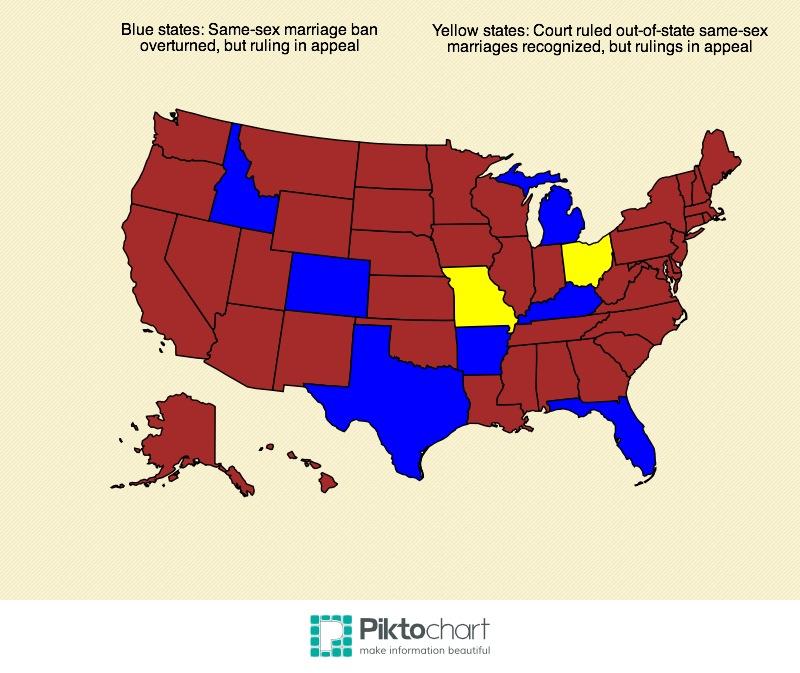 Thanks to the Supreme Court, same-sex couples in much of the United States still won’t be able to get married.

On Monday, the court decided not to hear cases involving same-sex marriage for five states: Indiana, Utah, Oklahoma, Virginia and Wisconsin, according to the New York Times. The ban on gay marriage had already been ruled unconstitutional in those states, but ceremonies could not yet be performed until appeals to the cases were heard.

The court’s non-action meant couples could marry in each of those five states – a lesbian couple married in Virginia shortly after the announcement – bringing the total number of states that allow the practice to 24. The District of Columbia also allows same-sex marriage.

The ruling also gives the opportunity for six more states – Colorado, West Virginia, North and South Carolina, Kansas and Wyoming – to have their gay marriage bans reversed because three federal appeals courts that have ruled in favor of the practice have jurisdiction over them.

However, the Supreme Court missed a big opportunity to finally put this hot-button issue to bed on a national level.

The remaining 26 states still disapprove of same-sex marriage. In each of those states, there is some kind of litigation pending to grant gay and lesbian couples either the right to marry or have their marriages recognized in their respective states, according to freedomtomarry.org, a website that follows same-sex marriage legal rulings and issues.

In seven of the 26 states – Arkansas, Idaho, Texas, Florida, Kentucky, Michigan and Colorado – federal or state judges have ruled against same-sex marriage bans, but each case has been appealed and awaits further consideration, according to the website.

On Tuesday, the 9th Circuit Court of Appeals ruled to strike down same-sex marriage bans in Nevada and Idaho, bringing the number of states allowing the practice to 26, according to the website. Their decision can also bring rulings in favor of gay marriage to Montana, Arizona and Alaska because those states fall under the court’s jurisdiction.

While the Supreme Court’s decision on Monday essentially gives gays and lesbians the eventual right to marry in 11 additional states, that still leaves 30 percent of the country without marriage equality (even though courts in those states are trying hard to make it happen).

This is almost a passive-aggressive solution to a problem that has recently taken the country by storm. Since October of last year, more than 10 states gave gays and lesbians the right to marry, but some cases were appealed, according to USA Today.

The Supreme Court could have heard any of the cases on Monday and decided on the issue once and for all. But now, the remaining states in which same-sex marriage is still illegal have to wait for their day in court, which is not fair to them or the American people.

Celebrities and political figures such as President Barack Obama, George Clooney, Dick Cheney and Lady Gaga have all spoken out in support of gay marriage, according to the Washington Post, which shows the issue gaining traction is a priority.

By deciding not to hear those five cases, the Supreme Court — the mother of all courts, by the way — is choosing to table this issue that is important not only to the LGBTQ communities, but to all citizens in the U.S. and around the world.

There is no real reason to leave the remaining states in litigation limbo. There’s no way to tell when the Supreme Court will hear the cases of the couples who just want the right to marry or be married to their loved one.

The half-measure by the Supreme Court is also confusing because it has already ruled in favor of same-sex couples in other ways.

In their striking down of the Defense of Marriage Act — first enacted in 1996 and then repealed in 2013 — the court ruled that same-sex couples who lived in states that allowed gay marriage should be considered married under federal law as well, according to the Supreme Court decision.

The court in 2013 also finally put an end to Proposition 8, which banned gay marriage in California in 2008. Two years later, it was ruled unconstitutional by a federal judge in San Francisco, according to court documents, but made its way to Supreme Court later.

So with the highest court of the land clearly taking steps to bring more rights to same-sex couples, it’s mind-boggling that it chose to do nothing, even if this particular nothing actually did do something.

But something isn’t enough. Those gay and lesbian couples in the states that don’t allow them to marry needed more — they needed everything. And there’s no telling when they’ll get it.