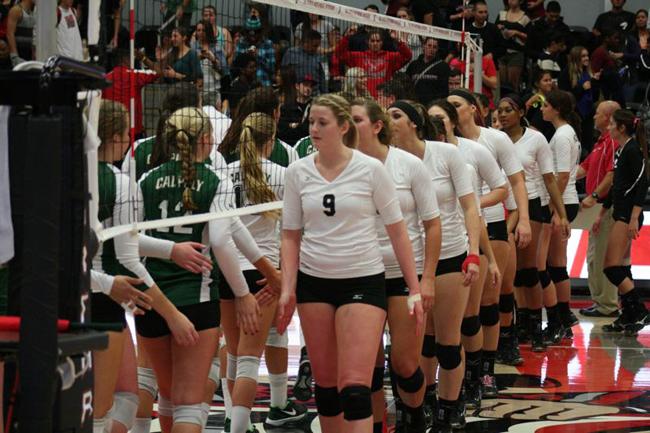 The CSUN women's volleyball team will play against the Cal Poly Mustangs this Friday, Oct. 10, 2014. File Photo/ The Sundial

The Matadors will take on No. 24 Hawaii Rainbow Wahine on Friday in a Big West showdown at the Matadome.

The Matadors lost their first conference match against the Long Beach State 49ers 3-1 on Saturday, making their Big West record 2-1.

“To beat them would be a really good win for us, for our program, for the conference,” Hinger said following Monday afternoon’s practice. “And it would be nice to have a little bit of redemption after the Long Beach game.”

CSUN defeated Hawaii 3-2 for the first time in the program’s history on Oct. 24 at the Matadome. Last season, the Rainbow Wahine were one of the tri-champions who shared the Big West crown with the Matadors.

Hawaii avenged their loss however with a 3-1 defeat of the Matadors on their home court on Nov. 23.

“They’re a good opponent, we know that,” head coach Jeff Stork said about Hawaii, the top team in the Big West. “But we’re also a very good team. I’m confident in this team’s ability to win this match, but we have to play it to find out.”

“Our offense is phenomenal,” Hinger said. “Nobody really knows the systems that we run. It’s a little bit different than traditional volleyball, so it really puts us in a good position against other teams.”

Hinger also said that in order to win, the team must collectively improve on defense.

The Matadors will be playing their first home game at the new blacktop in the Matadome. Stork praised the athletic department for its efforts in introducing the new floor.

“The coaches and the players see the progress that the athletic department is making, and the court is a part of that,” he said. “It’s a good thing.”

Hinger said the team is excited for their first home game of the season.

“We’re expecting a pretty packed house and a pretty exciting game,” she said.

­­Boykin is anticipating a winning season for the Matadors.

“Last year they got the Big West Championship,” she said. “We’re going to get that again and go further to the NCAA tournament.”

Hinger also sees the Matadors going all the way this year.

“We definitely have a good shot at first in our conference, and we’re going work our way to the NCAA tournament to do the best we can,” she said. “We have a really good team and we have a lot of opportunities to do that.”

Stork believes the Matadors must be good the entire season in order to have a shot at winning the Big West.

“We have to be good over time,” he said. “To win this conference, that’s what you have to be, great over time.”

Boykin is ready to battle in every game, no matter what the outcome.