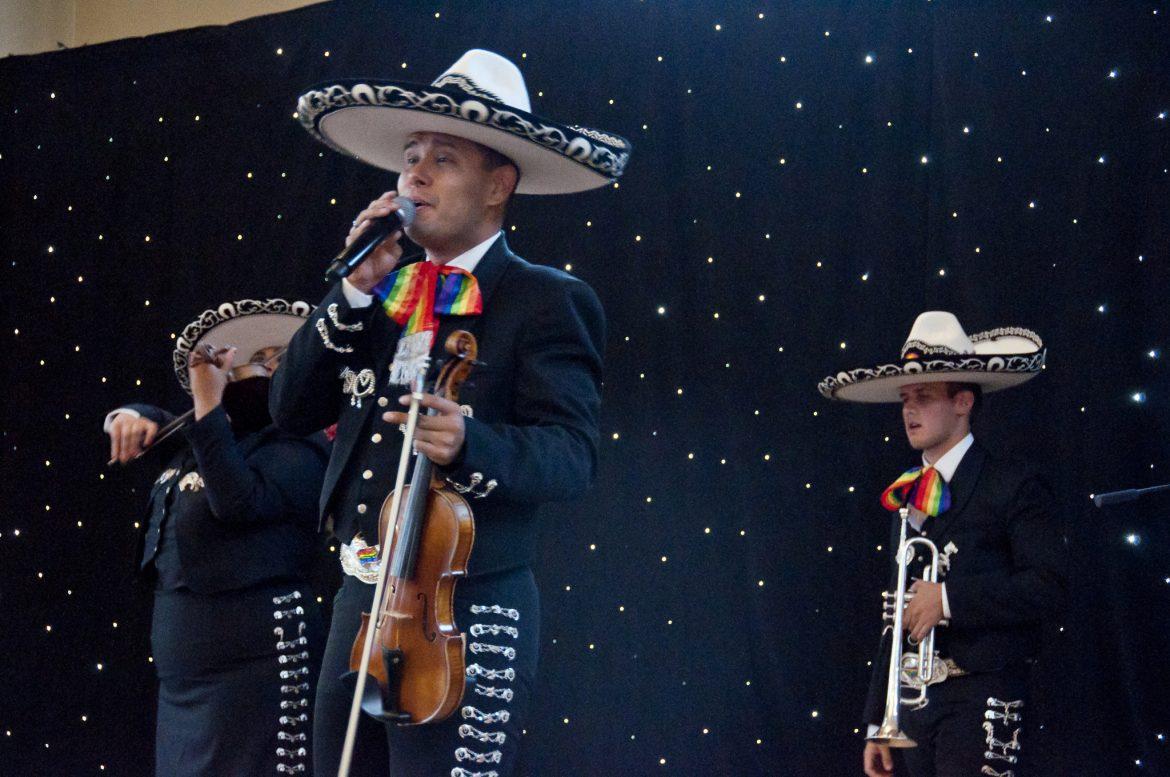 >>CORRECTION: The original version of this story incorrectly listed Craft Corner as a coaster making workshop.

CSUN celebrated National Coming Out Day in what resembled a carnival like atmosphere.

The event was organized by the CSUN Pride Center and served as a place where the lesbian, gay, bisexual, transgender and queer community could come together to celebrate who they are.

Held in the South Patio of University Student Union on Thursday night, guests were able to take advantage of such attractions as a photo booth, attend a coaster making workshop, or draw on a wall the things they are most proud of.

Pamphlets were laid out across multiple colorful tables that displayed a timeline from the 1930s to 2000s that provided information of historical gay rights movements and people.

Shirts were handed out saying “I’m proud to be … .” Guests were able to fill out the subject of their pride using a marker.

Sarina Loeb, coordinator for the Pride Center and LGBTQ initiatives, described the importance of National Coming Out Day.

“[National Coming Out Day] is to celebrate being yourself, being proud of your identity,” Loeb said. “For some, that is coming out and telling their family and friends; for others, that might not be safe, but that’s okay. An event like this is to be celebrated, feel free and be supported by the community. I hope everyone has a good time.”

The event featured an evening variety show that saw many participants.

CSUN’s Hip Hop group began and ended the event with their choreographed dance and song performances.

During their performance, the mariachis introduced fellow singer and violin player Natalia Melendez, who the group says is the first and only transgender mariachi singer “in the history of mariachi,” they said.

The Pride Center offers a comfortable place to hang out, meet people and connect, get resources. On a weekly basis every Tuesday, there LGBTQ discussion groups that provides a safe space for students to share experiences and discuss topics facing the LGBTQ community.

“The goal for National Coming Out Day is to get exposure to the LGBT community,” Sanchez said. “Not only that, but also to get people to see that coming out is not necessarily a bad thing.”

National Coming Out Day is not only meant for students who have come out to the community, it also serves as a way to help students who are struggling with their identity.

“Hopefully, it inspires people to come out,” Sanchez said. “Sometimes, all someone needs to come out is to see other people come out.”

Although National Coming Out Day is an important event, the Pride Center also hosts other events throughout the semester to help students feel more at ease with who they are.

One such event is Trans Awareness Week. This year’s event will be from Nov. 17 to Nov. 20.

“It is meant to bring awareness to trans issues and educate people about anything, and everything trans,” Sanchez said of Trans Awareness Week.

At these events, guest speakers are invited to lecture and educate students about issues they may be facing. Students may learn what it means to be transgender, and are taught terms deemed appropriate or inappropriate.

Trans Awareness Week’s open lectures are provided to students at no cost.

Pride Center events are meant to be fun as well as educational. The Pride Center is open to all students, who are welcome to join in on the fun and learn about other students who are part of the CSUN community.