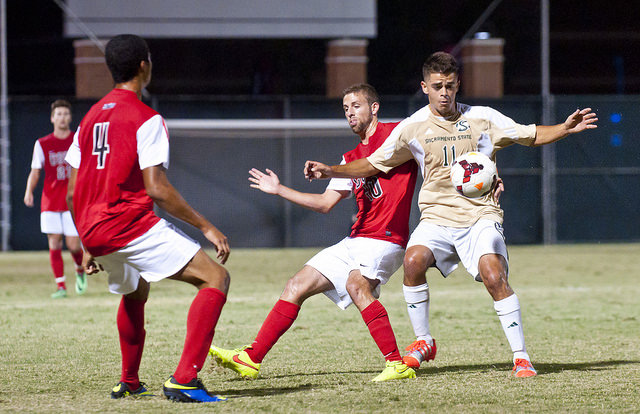 CSUN suffered a fourth shutout of the season and a fourth consecutive loss after falling 1-0 against the Sacramento State Hornets in a Big West Conference match at Matador Soccer Field.

The Hornets scored a header in the 50th minute, before junior defender Trevor Morley received his second yellow and was ejected from the game, forcing the Matadors to play with 10 men in the remaining 11 minutes.

Head coach Terry Davila was highly critical of his team.

“Obviously we aren’t good enough right now,” Davila said. “There’s always so much you can do at training, but the players got to bring something to the table. The ball’s not bouncing our way and we got to create our luck by working hard.”

But the Matadors had a promising start to the game. 15 minutes in, CSUN was owning the field, having plenty of chances, but not capitalizing.

Junior goalkeeper Adam Hobbs was rarely tested, with one chance coming from a header from the Hornets. Hobbs instantly saw the threat and punched the ball out of play.

As halftime came knocking, the Matadors finally had a clear chance at getting on the scoreboard with a penalty-kick thanks to a Hornets’ handball foul. Morley took the spot-kick, only to have it saved by the on-fire Sacramento State goalkeeper, who totalled eight saves.

“A lot of people don’t like taking those shots,” coach Davila said on Morley’s penalty. “Great players in the world miss those shots.”

The Matadors began the second half as strong as they did in the first as Lev-Ari opened himself up and darted toward goal, however, a Hornet defender was there to deny him his shot.

A corner shortly after gifted the Hornets the lead that they held onto for the rest of the game.

The Matadors worked hard until the last minute to secure the equalizer and hope to go into overtime.

In the dying moments, Morley was caught denying the Hornets a clear goal-scoring opportunity, received his second yellow of the match and was sent off. The Hornets were able to capitalize on the advantage, and shut out the Matadors.

“We created shots, we created chances, but we missed them,” Davila said. “We’ve had those types of chances in the last four games and this is what we do and we have to improve it.”

The Matadors will host UC Davis Saturday night at the Matador Soccer Field.