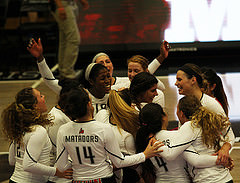 The Matadome was filled with supporters while the Matadors swept No. 21 Hawaii on Friday, October 10 during their first home game of the season.

“Winning and losing is always a part of sports, we always expect to win,” Stork said. “We had a lot of passes that were perfect so we were able to run the systems that we normally run. Offensively it was a good night for us. ”

The first two sets were dominated by the Matadors keeping impressive leads in both. The first set was resulted in a total of 18 kills from the team.

Sam Kaul, senior, started their first lead of the set with a kill that brought the score to 11-7. A kill by senior Casey Hinger and a service error by Hawaii gave the Matadors their largest lead of the set at 22-14.

The first set ended at 25-17. The second set started out just as strong as the first with a 6-point lead (12-7). At one point, Hawaii was able to shrink the lead to one (19-18) but it was not enough to keep the Matadors from winning the set.

A kill from junior Cieana Stinson helped solidify a lead that turned into a 25-20 set win for the Matadors.
The third and final set could have gone either way as Hawaii made efforts to match the Matadors point for point. Hawaii was able to catch-up to the

Matadors at 21-21 but three kills from Hinger and a kill from junior Danetta Boykin brought the final score to 25-21.
The Matadors’ offensive game was a game-changer with a .276 hitting percentage and six aces, two of which came from seniors Kelcie Randazzo and freshman Katie Sato.

Another freshman that had a breakout performance was Lauren Conati.

Conati racked up 38 assists during her first college-level game as a replacement for injured setter Steffi Miller.

“She’s a seasoned player but we have a lot of players like that and it was nice to see her handle herself,” Stork said. “Overall, for a freshman coming in against a ranked team in this type of environment, it’s outstanding.”

Not only was the team’s offensive game an important aspect of the win but the crowd played a huge part.

Senior Natalie Allen said that the crowd was great motivation for their gameplay.

“It was a fight for us but overall we were just ready and our home crowd was there for us,” Allen said. “This was the biggest crowd that I think I’ve seen in all of my five years. We’ve never had this big of a crowd so they just need to keep coming out and we’ll do great.”
The Matadors had students, family and friends in attendance. Even the men’s volleyball team came out, donned in Hawaii-style button-ups.

“Everything that you do before is bettering for the future,” Stork said. “You’re either getting better or you’re getting worse. This team is getting better and I think the atmosphere that we had helped us a lot with that path.”

The Matadors have played 14 away games this season and although they got a chance to finally come home, they are ready to get right back on the road.

“This team put a lot of work in the pre-season and a lot of it had to do with travel,” said Stork “They’re kind of used to rough schedules.”
Their next game will be against Cal Poly on Friday, Oct. 17 at 7 p.m.