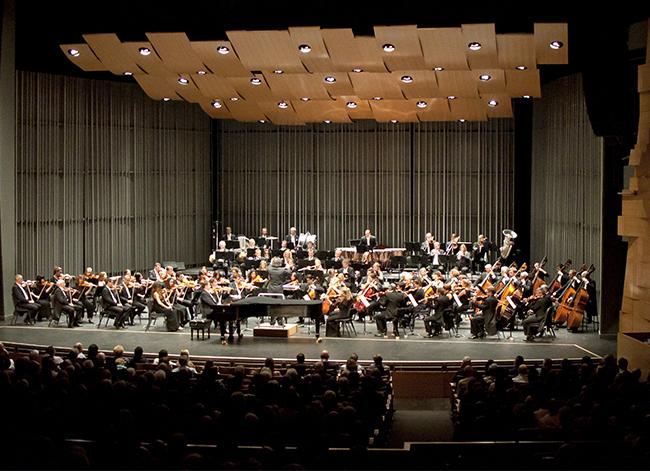 The music of classical composers Tchaikovsky, Dvorak and Prokofiev flowed beautifully through the Great Hall of the Valley Performing Arts Center on Friday night as the London Philharmonic Orchestra entertained a packed house. The 100-piece orchestra performed amazing pieces that were striking, yet intimate.

Dvorak’s “The Noonday Witch,” started out calm and soothing, but then became ominous and menacing with the use of the bass, clarinet and bassoon. This piece is an adaptation a Czech poem in which a mother warns her mischevious son to behave or else the Noonday Witch will appear and take him away. At times the tone seemed jolly and humorous due to the violins, but this was sharply contrasted with low notes from the brass section.

The next piece featured guest pianist Jean-Efflam Bavouzet, who played Prokofiev’s Piano Concerto No. 3. Bavouzet moved his hands gracefully across the grand piano and at times it looked like he was pounding away, but the notes he produced were nothing short of amazing. The audience was silent as all eyes were on Bavouzet. It’s easy to see why he won a Gramophone award for playing Prokofiev’s concertos.

He received multiple standing ovations and returned to play an encore, Debussy’s Etude No. 11, “Pour les arpèges composes,” which was fast and upbeat.

The rest of the piece had lots of contrast. The piano and cellos provided some upbeat tempos, but clicking castanets provided an eerie feel to the song.

The last composition highlighted another Russian composer Tchaikovsky’s Symphony No. 6 in B minor, Op. 74. This work lasted nearly an hour and is rumored to be about Tchaikovsky’s thoughts about mortality and is nicknamed “Symphonie Pathetique.” With a slow introduction thanks to the strings and woodwinds, this piece lulls listeners into a false sense of security until the brass section comes in surprises the listener.

Here, conductor Vladimir Jurowski truly showed why he is leading this remarkable orchestra. He kept them in perfect sync. At times he would calmly point at the section he wanted and at other times he move violently as his salt and pepper hair waved about. Jurowski has been the orchestra’s principal conductor since 2007 and is originally from Moscow.
The London Philharmonic has performed for the Queen’s Diamond Jubilee Pageant and on film scores for such movies as “Lawrence of Arabia” and the “Lord of the Rings” trilogy. Their performances brought a sense of class and elegance to the Valley.