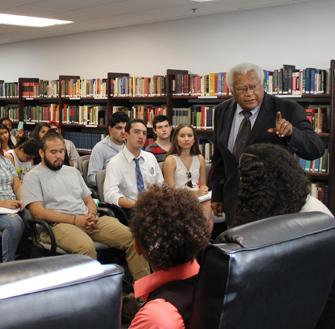 Reverend James Lawson lectures during the CDSC "Taking a Stance for Justice" panel held at the Richard Aronstam Library in Manzanita Hall on Oct. 13. Photo Credit: Vince Nguyen/ The Sundial

It’s not every day that students are offered the chance to listen to and discuss issues that have an impact on the society they live in.

That was the case Tuesday afternoon for the CSUN town hall “Taking a Stand for Social Justice” sponsored by the Cal State Northridge Civil Discourse and Social Change initiative (CDSC).

“America After Ferguson,” which explored the complex questions raised by the events in Ferguson, Missouri.

At Tuesday’s event, the panelists led a discussion based on racial profiling, militarization and police brutality.

“It’s a very, very important event,” Lawson said. “It’s the kind of conversation going on in the country.”

The free event allowed the panelists to speak about the issues, while also allowing active participation from audience members who felt safe enough to engage in discourse and voice their opinions.

“The one word they kept saying was ‘powerful’,” said Michael Gonzalez, 23, a CTVA major, on how the event felt to him.

For Gonzalez, the event was a way to solidify his belief in tolerance.

“For one thing, I’ve always tried to think without racism and without ignorance,” Gonzalez said.

Discussions being led by the panelists included topics such as incarceration, especially among African Americans and those with mental health illnesses, and police brutality —  not only on the streets but also within the prisons.

Johnson stated in the discussion that 57 percent of violence in prisons is initiated by the officers themselves and not in reaction to a problem with an inmate.

Due to social media, a lot more violence by police officers occurring on the streets is being made public. However, in the prisons, there’s no one to watch it happen and report on it, Johnson said.

“The city of Los Angeles — its business leaders especially, but also as political leaders — do not know what to do about the violence because, for them, it’s a normal and necessary part of American life,” Lawson said.

And police brutality has been in the news a lot lately, especially with the events in Ferguson.

“What we saw in Ferguson was reminiscent of the civil rights era. We hadn’t seen it that severe in a long time. That was a very big catalyst for people to be outraged about what’s happening,” Bernard said.

Several panelists and students felt it was important to note that not all police officers are violent. However, it is the system that sets them up to be that way.

An example of this was given that explained that campus police in grade schools are carrying weapons that kids shouldn’t be exposed to. It sets officers up to terrorize and have power over others.

For student Yevik Yesayan, 28, a senior journalism major, who has experience working for youth organizations, says she feels like she deals with students in similar situations.

“This was a topic I was interested in,” Yesayan said. “It is very important as a journalist and a person living in a community with this type of violence.”

The event’s goal was to elicit a reaction to start a movement and send the message that anyone can help take a stand for social justice.

“We, who oppose police brutality, must do the investigation and the hard analysis,” Lawson said.

CDSC is an initiative started at CSUN nearly five years ago to encourage community learning and participation on social justice issues.

The next CDSC event is “Two Women Talking,” a performance and storytelling event by Monsoon Bissell and Benaifer Bhadha, from 4 to 6 p.m. on Oct. 16 from 4 p.m. to 6 p.m. in the Aronstam Library

The event will discuss gender and violence.