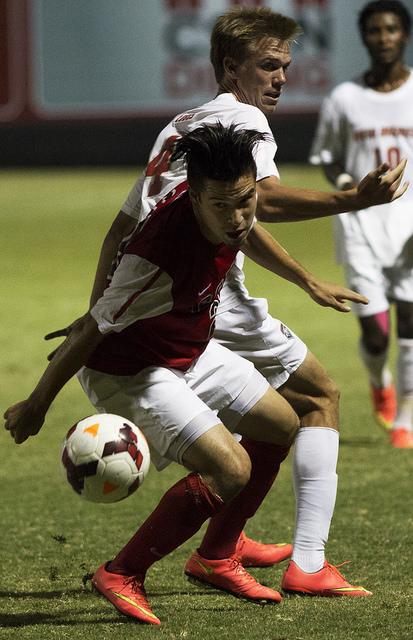 In the dying moments of extra-time, everyone tries to capture their breath after running up and down the field for an hour and a half.

Somehow, some way, one player consistently glides through the defense, taking advantage of everyone’s fatigue. He’s only human, but he’s making defenders look like training cones, and making his fellow teammates shine through moments of pure mental strength and stamina.

In the dying moments against Cal State Bakersfield, he finds an open player and weaves the pass to him to head the ball towards goal, only to have it literally fall into the hands of the opponent. The play results in a penalty kick, and it’s cooly taken. The Matadors win the game.

Every striker needs a winger who can provide and place a ball between their feet to tally up their goal count. Every defender needs a midfielder able to control the midfield and protect their line. Even a midfielder needs someone to be the offensive engine for the rest of the team. Every team needs a David Turcios, a player capable of making plays for his teammates.

The junior midfielder and winger has been an integral part of the Matadors since he became a regular starter. His first year at CSUN was a redshirt season, but the following year was a breakthrough one.

“I just got to get players the ball, try to get them in on one-on-one situations,” Turcios said. “ I also need to shoot more,”

Although the midfielder hasn’t seen his name on the scoresheet yet, Turcios been one of the focal points of the Matadors’ offense for the last two season, silently threading passes in the background and setting up plays for his teammates.

Turcios is a San Fernando Valley native, living in Reseda. He committed to CSUN because of his number one influence, his family.

“I wanted them to see me play,” Turcios said. “I didn’t want to go far, and not let them see me play.”

Playing in his hometown makes the midfielder happy. He loves it because of familiar faces coming out to watch him shred the opponent’s defenses.

“I get surprised when its friends I haven’t seen in a long time,” Turcios said.

The Matador is often described as quiet and timid by his teammates, but he’s got one of the most explosive personalities seen when he has a soccer ball in his possession.

Senior midfielder, Yarden Azulay, said his teammate opens up eventually, but lets his skills on the pitch do all the talking.

“He’s quiet, but is always talking on the pitch,” Azulay said. “Very influential, and covers so much of the midfield.”

Turcios started playing when he was about 6-years-old, but was initially a goalkeeper. He changed to an attacking midfielder and winger as he continued playing.

At Birmingham High School, he was named MVP, All-League and All-City First Team and was captain during his senior year. He played all four years, and was a starter in his last three seasons. His qualities as a winger were not only acknowledged by the school, but by head coach Terry Davila as well.

“David is a very energetic player with a great motor,” Davila said. “He turns well in the midfield, and he’s a very creative player off the dribble and he can run for days.”

As the head coach brought in his prodigal midfielder in 2011, Davila had no idea how great Turcios would be come.

Davila often deploys Turcios on either side of the flank. The winger may start on the right for the game, but would later be wedged into the left if Davila decides to substitute someone off.

Sophomore midfielder Shane Steffes believes Turcios’ versatility is one of his best traits.

“He’s one of the best wingers we have and helps the team offensively, always pushing plays upward,” Steffes said. “He’s always around the midfield, and can play from the left or the right. He’s got it all.”

Turcios is lethal with both his right and left foot, effortlessly storming down the pitch and flying by defenders one after another. He takes after his idols from the current FC Barcelona squad.

“I try to see the professionals [like] Iniesta, or Messi, try to get a little bit from them.” Turcios said. “The rest is when I see it, I do it.”

Turcios’s off-the-field attitude is top-notch as well. Azulay said the winger is a reassuring teammate, and is always providing feedback.

“The best thing you can hear from him is ‘good job,’” Azulay said. “He’s a good person and friend.”

As a younger player, Steffes looks up to Turcios’ maturity. He’s learned much from the upperclassman, especially about keeping your cool and confidence when under pressure on the pitch.

“His attitude makes him the best on the team, he works harder than anyone and we can see that,” Steffes said. “He provides feedback all the time and one of the best things he’s told me is let the game come to me.”

Steffes knows Turcios is the kind of friend who will always have his back.

“He gives you everything he’s got,” Steffes said.

The junior is undecided on his major. His future is still something he wishes to see gradually unravel. But if soccer is something he’s destined to do, it’s not like he won’t grasp the opportunity.