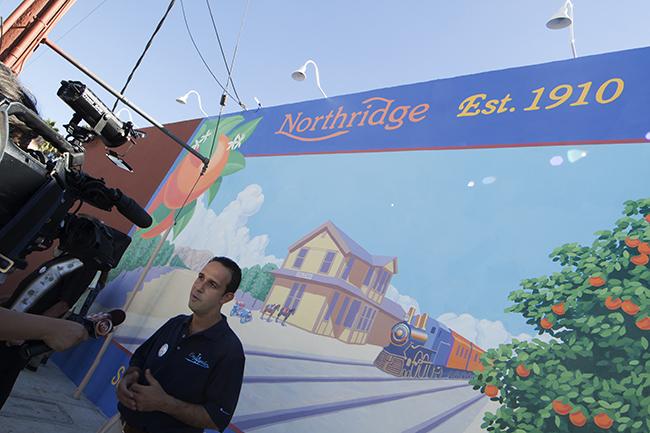 Los Angeles City Council Member Mitchell Englander answers questions for the press in front of a newly unveiled mural on the side of "Orphaned CDs" on the corner of Reseda Boulevard and Rayen Street on Oct. 5, 2014. Englander said the mural encourages art, music and culture in the neighbored. Photo Credit: Trevor Stamp/ The Sundial

Overflowing trash cans, wilting plants and colorless walls trace the surrounding Northridge area. But with the help of the Northridge Sparkle Campaign they are slowly but surely being replaced with rich murals and vegetation. You may have seen volunteers cleaning up the busy street or planting trees in the area. They aren’t just fixing the appearance of the neighborhood but they are also building a community.

In 2010, a group of neighborhood watch members banded together to improve these conditions and they later turned into the grassroots group now known as Northridge Sparkle. They laid mulch, planted trees, watered plants, and removed trash, and more. Now, they are not only trying to improve the aesthetics of these areas, but they are also strengthening the sense of community through service and participation.

“I’m glad something is happening to Reseda Boulevard,” said senior liberal arts major Marissa Molina, 21. “I think it will really make a difference in how it looks.”

Last week, Northridge Sparkle, in collaboration with volunteer artists, came together to decorate steel trash bins that will line Reseda Boulevard. The artists were given three themes to base their designs: Northridge history, nature and famous works of art. The decoration of steel trash cans was done to reduce littering and waste on the street as well as to personalize one of the neighborhood’s main streets. Another way the group is changing the neighborhood is by painting murals. The first one was unveiled last Sunday at Orphaned CDs, a record and CD store, on the corner of Reseda Boulevard and Parthenia Street.

“Originally, there was an ordinance against murals so we started by painting garage doors,” Andrea Alvarado, Northridge Sparkle chair said. “But, the initiative passed and there will be more murals.”

This first mural, titled Zelzah Train Depot, was painted by Tim Cornelius. His piece was inspired by looking through old photographs of Northridge.

“This [mural unveiling] was huge,” Alvarado said. “We are going to take a minute to breathe after this, but we will come up with another event very shortly.”

Northridge Sparkle took over after the Northridge Oasis Business Improvement District (BID) halted their projects. The BID abandonment in 2006 led to overflowing trash cans and debris in the area.

After the creation of Northridge Sparkle, other people started to get involved. One Sparkle volunteer, Thomas Baker, single-handedly plants and maintains a group of succulent plants on Reseda Boulevard. These were planted to replace the BID’s cement planters that were no longer being taken care of.

Los Angeles Mayor Eric Garcetti designated 15 neighborhoods in the San Fernando Valley for this Great Street Initiative. The purpose of this initiative is to transform the area of Reseda Boulevard from Parthenia to Plummer. Garcetti sought out to make this street more friendly and welcoming for residents, visitors and businesses.

These are just a few of the projects that Northridge Sparkle has committed themselves to bring life back into the Northridge community.

One Northridge resident believes that these new changes are more than just a way of beautifying the neighborhood.

“You never hear of people getting together and doing this kind of thing,” said Corey Pitt, a 20-year-old Northridge resident. “The fact that people got together to work on this mural shows that there’s still some unity in the world.”

If you are interested in volunteering with the Northridge Sparkle Campaign or want more information, contact them via email at northridgebeautification@gmail.com