Hiking trail did Villa no favors 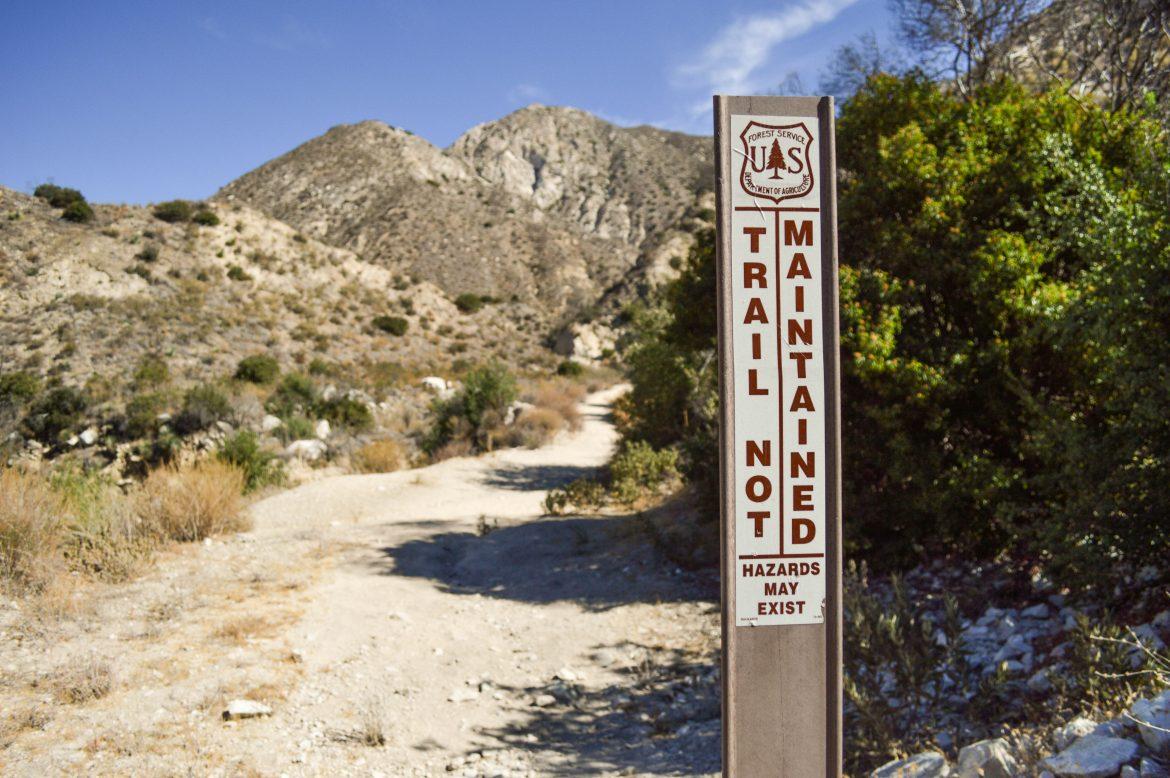 Condor Peak Trail in the Angeles National Forest is where Armando Villa hiked with the Zeta Mu chapter of Pi Kappa Phi. Signs warn hikers of hazards that the trail may have.

The Angeles National Forest where 19-year-old CSUN student Armando Villa lost his life has a slogan – “Know Before you Go.”

As to how much Villa’s fraternity, Zeta Mu, a chapter of Pi Kappa Phi, knew about the Condor Peak trail before they took their “Super Awesome Weekend,” remains unknown.

Villa was found July 1, severely dehydrated, suffering from hyperthermia and with cuts all over his body, including blisters on his feet. CSUN’s private investigation report concluded that Zeta Mu did engage in hazing but found no evidence that Villa was intentionally deprived of water and proper footwear.

The report stated the fraternity simply did not bring the necessary amount of water and proper footwear to carry out the hike.

Based on the lack of water and improper footwear, detailed in the report, Tim Szczepanski, Outdoor Adventure Coordinator, said, “They failed at a lot,” when it came to preparing for the trip.

The 16 mile trail, which stands high above Big Tujunga Canyon, is listed as difficult by Modern Hiker. Its steep incline and multiple offshoots can make it hard to navigate.

The trail has an elevation of 4,000 feet and a distance of 16 miles, according to Modern Hiker.

John Wagner, spokesman for the Angeles National Forest said, despite recent fires the trail was in decent shape at the time of the hike but noted there was little protection from the sun.

“There were some washouts and the trail was in need of high maintenance after the Station Fire,” Wagner said. “But for the most part all of those concerns were fixed.”

The fraternity had experience with this trail, in fact they’d gotten lost on it twice between 2010 and 2011 and ended up spending an unplanned night during both trips, according to the CSUN private investigation report.

They even modified the trips to an “up and back” direction and away from the previous route which took the longer loop hike.

But the “up and back” was no walk in the park. The trail, which peaks at an elevation of 5,440 feet, is a straight incline climb. After the first 1,440 feet, the trail gains a 4,000 foot increase in elevation.

For reasons unknown, the initiation hike which usually takes place in the winter or early spring, was pushed to July, a dangerous time to hike regardless of experience, but even more dangerous if not adequately prepared.

Part of the preparation would include things like leaving early in the morning and finishing before the midday heat, staying hydrated, having the proper shoes and being well rested. All of which the pledges were not.

Although not connected to the incident, Szczepanski stresses the importance of staying hydrated when hiking.

“We live in a desert,” he said. “Whether it is July 1 or December 1, water is probably is the most important thing you need to have.”

With little to no rest, inadequate nutrition, ill-fitted shoes and an insufficient supply of water, they began their hike.

According to CSUN’s report, the pledges were told to pick up “Vans type slip-ons” prior to the nine mile trek at the “3 for $20 store.” It has been confirmed that not all pledges had proper fitting shoes as a result of distribution.

In the Los Angeles County Department of Coroner autopsy report, it was detailed that Villa suffered “blood-filled blisters” on his feet and severe sunburns on the bottom of his feet.

The lack of proper footwear is crucial, said Ian Navarro, Outdoor Adventures graduate assistant. Navarro suggests about a finger’s width between the toe and the front of the shoe.

“Err[or] on the side of larger instead of too small especially on the down-hill sections of a trail,” Navarro said. “This will also accommodate any swelling.”

The fact that the shoes didn’t have laces also played a role in the condition of Villa’s feet.

“Shoes with laces help to accommodate foot shape and help hold the heel in the heel cup to prevent slippage,” he said. “Slippage can lead to blisters which are caused by friction, moisture and heat.”

The report also states that the pledges were each given a gallon of water and some additional bottles of water to share during the hike. But it wasn’t nearly enough, as many of them stated in the report that they had gone through their water before they were even half-way down the trail in the blazing mid-day sun.

Szczepnski says sun and exposure play a big role in decisions when water supply is limited.

While there was a waterfall somewhere along the trail, Park Rangers said the drought left little if any reserve for those in need.

One thing that couldn’t be fixed was the lack of coverage on the trail. The fire had scorched acres of trees and other brush that would’ve provided some refuge.

Had they done their homework, they’d have known that the expected temperature during their planned trip was predicted to be in the 90s and that the trail would have provided very little if any coverage for them.

Villa was airlifted to Holy Cross Medical Center by the Los Angeles County Fire Department, where he was pronounced dead at 6:04 p.m.

He had a recorded temperature of 108.8 and severe sunburns, according to the autopsy report.

Outdoor Adventures had nothing to do with this event and was interviewed solely on the basis of understanding the importance of proper equipment.