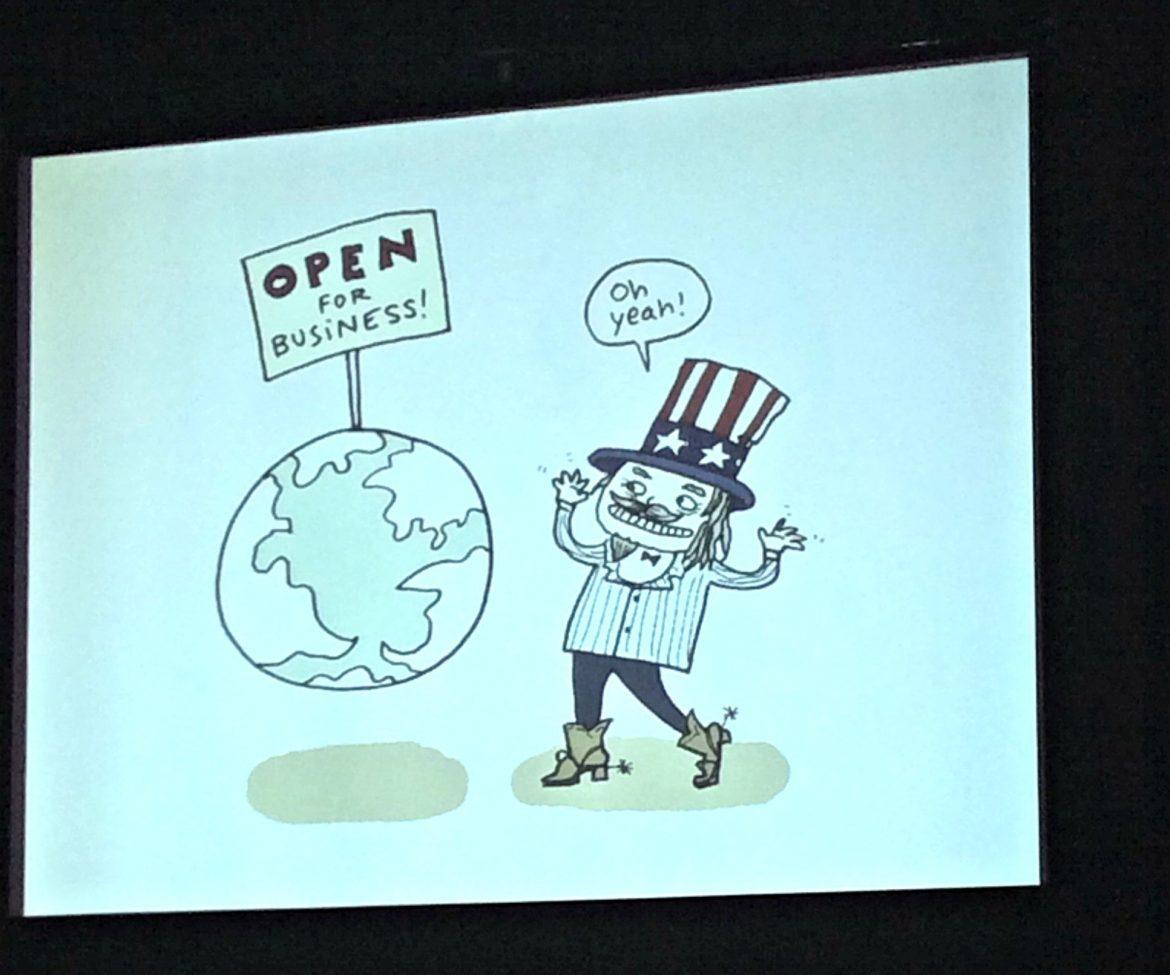 Stephanie McMillan, award-winning journalist and political cartoonist, elaborated on everything wrong with capitalists in a slideshow presentation featuring the colorful commentary in her political cartoons. Michael Erazo/The Sundial.

The Cal State Northridge Institute for Sustainability on Tuesday used their annual symposium to urge students to view the ocean as a blank canvass, colored, for better or worse, by decisions made in their daily lives.

Sustainability Day is the symposium spotlighting environmental issues through expert commentary, multimedia presentations and documentary video.  This year’s theme was “Our Precious Ocean.”

The daylong event, held in the Northridge Center of the University Student Union, was divided into four 75-minute sessions covering, what organizers believe to be, the full spectrum of issues concerning the ocean.

“I hope that we impact students enough that they really think about it,” said Dr. Helen Cox, department of geography professor and Institute for Sustainability director.

The 11 a.m. opening session linked land-based carbon dioxide emissions to the ongoing increase in oceanic acidity that, left unchecked, could eventually produce an ecosystem wholly alien to the current.

The second focused on overfishing, official indifference, and consumer responsibility.

The third looked at plastic, its abundance in the ocean and reducing it by way of boycotting single-use plastic containers.

The event closed with panelists discussing, what they viewed as, the conflicting prerogatives of capitalism and environmentalism.

Turnout was highest for the opening sessions, appearing to clear 150. Students comprised the majority of the attendants.  Few stayed beyond a single session.

“You want me to be honest. I think a lot of students here are told to come here by their professors,” said Nour Chaaban, a junior urban planning major and Associated Students chair of sustainability. “I’m sure that there’s always a handful of students that are genuinely interested because sustainability is still kind of a question mark.”

During the second session, attention generally held out for an hour before students took to their phones to mark the waning minutes.

Junior business management major Bryan Santizo’s disappointment with the audience was tempered by appreciation that a subject of concern received public airing.

“I actually expected there to be less. You could say it’s unfortunate, but this is something I’m interested in so I hope people come out from this and really do something. Really want to do something,” said Santizo.

Stephanie McMillan, award-winning journalist and political cartoonist; and David Klein, director of the Climate Science Program at CSUN, held the the discussion “Capitalism vs. Climate” that addressed capitalism and the destruction of the planet.

Klein mentioned how a hotter climate, especially inland, would cause extreme weather events, make oceans more acidic, and lead to the destruction of any organism in the coral reefs.

He called out the culprit to the climate crisis.

“Capitalism’s response is to make things worse,” Klein said. “Wrecking the planet is the Wall Street business model. In order to survive, we need to replace with an alternative form of human cooperation that’s consistent with the future.”

McMillan elaborated on everything wrong with capitalists in a slideshow presentation featuring the colorful commentary in her political cartoons.

She brought to attention how capitalism focuses on maximizing profits and ramping up the process of consumption while never considering the good of the people.

“If we want a good future, we really don’t have more time to waste,” McMillan said.

She suggested the dismantling of capitalism and that only the world’s working class could offer an alternative in a revolutionary movement.

Jazmine Cable, a junior marketing major, came away from the discussion intrigued.

Cable says she wants to think about it more and understand capitalism better.

McMillan said she was happy with how the event is going so far, even though it’s too early to tell if it will make people take action.

“People are just starting to think about what the cause is of global warming and what capitalism actually is and look at alternatives,” she said. “A lot of people want to know what comes next so that’s a big thing that needs to be discussed.”

McMillan mentioned what she heard from a person on campus.

“One was talking about how he thought it was a good idea to organize around how the university uses its funds and ‘it should be more towards helping with education then building gigantic buildings’,” McMillan said.

McMillan said this could be the start of people taking action.

Everyday this week there are a series of presentations and discussions about the climate and capitalism being held with cartoonist Ted Rall, McMillan and more.

McMillan says they have a specific goal for people who are interested in building a organization and how to build a mass movement.

“I think it’s going to be a concrete way for people to conceptualize building organizational structures,” McMillan said.

All events are free and open to the public.

Tuesday’s presentation, “Capitalism vs. Climate,” will be revisited Thursday.