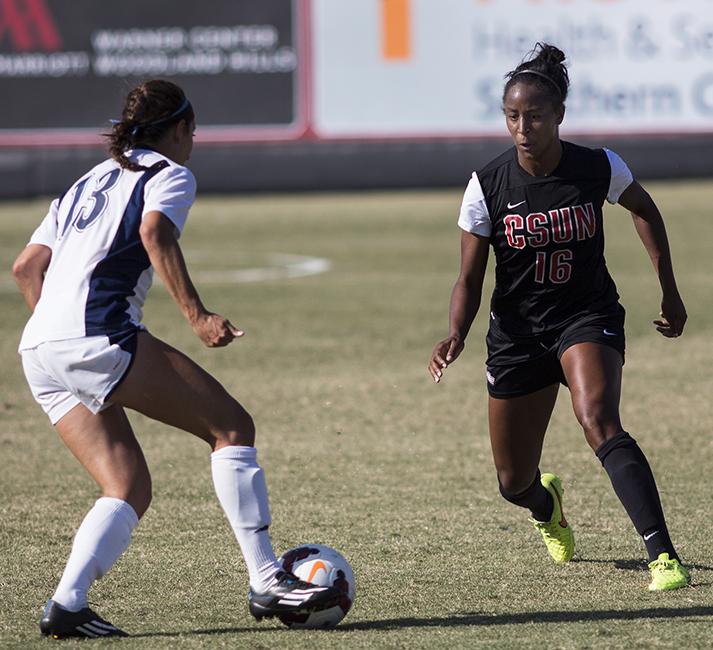 Senior Leandra Walker (right) gets into position to stop UC Davis' Sienna Drizin from breaking into a run during the Matadors' game on Oct. 16, 2014. The Matadors continued their Big Conference win streak with a 4-0 victory over the Aggies. Photo Credit: Trevor Stamp/ Senior Photographer

With a show of force Matadors Cynthia Sanchez, Lyndsey Preston, Tabitha Dixon and Ariana Tran each earned goals for the victory which now puts the squad at the top of the conference with 12 points.

“It’s the best game we’ve played quality-wise, our energy, commitment and our relief is there and it’s unshakable.” Said sophomore goalie Jovani McCaskill, who earned four saves to secure their shutout.

The Matadors came out strong in the first half with a goal by sophomore forward Cynthia Sanchez in the 11th minute of play and continued to dominate the Aggies throughout the half with six shots on frame.

The second half saw the Matadors turn up the heat in the 67th minute when junior forward Lyndsey Preston seized her opportunity off a cross from senior midfielder Melissa Lopez pushed through by senior midfielder Brittanie Sakajian. Preston finished the play with a left shot to the back of the net to earn her third goal for the season.

Up 2-0, the Matadors were on a comfortable track to victory late in the second half but continued to push the Aggies with an overwhelming show of force on their half of the pitch.

It took only three more minutes following Preston’s goal for Tabitha Dixon to sink a third point off another cross from Lopez.

The roll didn’t end there. Lopez continued her magic with yet another assist as she fed the ball through to Red Shirt Freshman midfielder Ariana Tran who finished for her first career goal. The assist was Lopez’ third for the evening and her carter putting her at 5 points for the season.

“I know we have four games left but we’re going to keep punishin,” said Lopez.

“I think we’re coming together as a team, there was a lot of doubts about the kind of team we were and who we’re going to be and I think we’re putting those doubts to rest.” Said Sakajian.

The crippling 4-0 victory put any doubts to rest about this squad who showed great poise and intensity with 18 shots on goal for the afternoon.

“We’re not going to take any breath, we going to keep going for it and we have to stay humble,” Said Sakajian

The Matadors can continue their push through the Big West this Sunday as they host Cal State Fullerton at Matador Soccer field with kickoff slotted for 6 p.m.