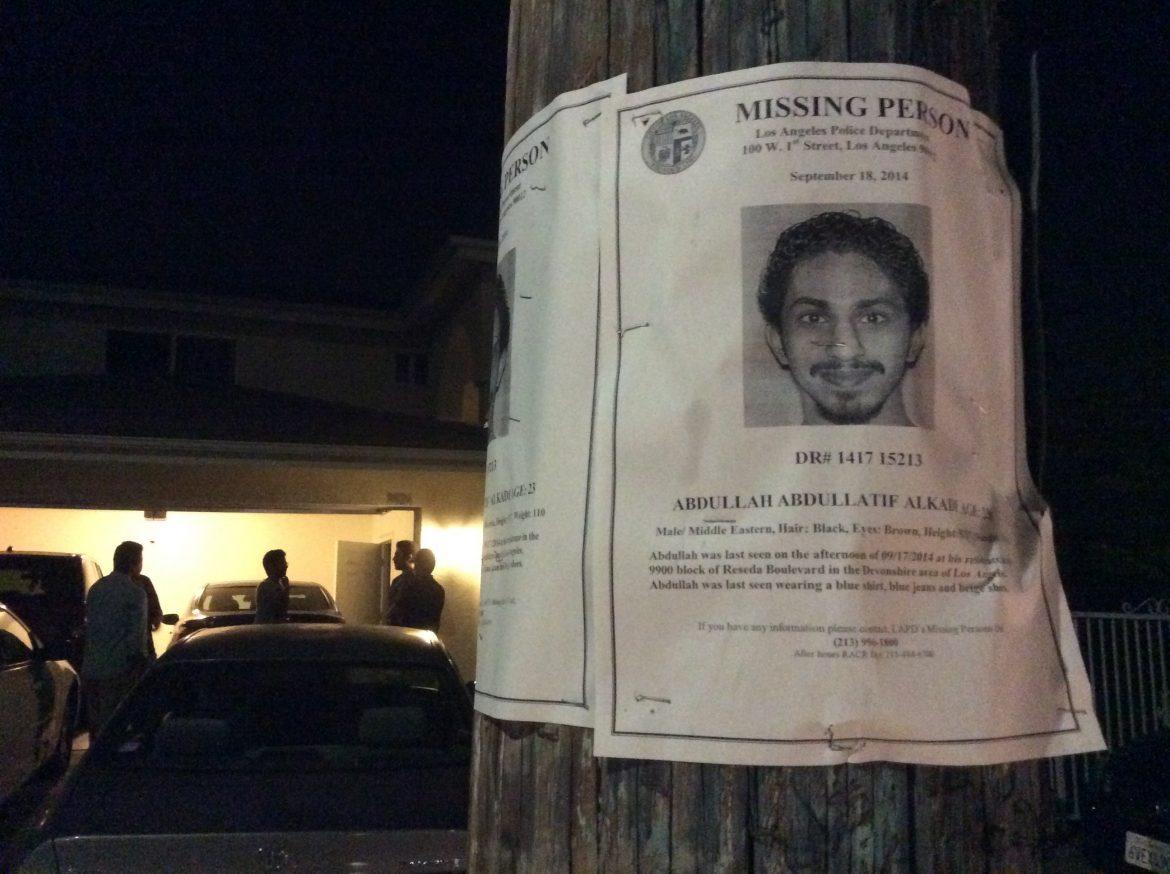 A missing person's flier for California State University, Northridge, student Adbullah Alkadi is attached to a pole outside of his home in Northridge. Friends gathered friday night at the home of the student to mourn his death. Michael J. Arvizu/The Sundial.

Details of the arrests are expected to be released Monday afternoon during a press conference with LAPD Chief Charlie Beck.

Amid the cameras and lights of local media who have been camped outside the home since the news of Alkadi’s death broke Friday night, about 20 or so friends could be seen inside the home in the 9900 block of Reseda Boulevard in Northridge, just blocks form the university.

At 7:30 p.m., a group of 10 friends entered the house. Many stood around the house conversing, while others could be seen outside smoking a cigarette. Cars came and went throughout the late afternoon, and the driveway to the complex where Alkadi lived had a few more cars parked on it than on Friday.

The gathering of friends and family at the Alkadi household reflects the Islamic tradition of gathering at the house of the deceased, Aljandao said.

“We go there. We pray for him,” said Aljandao. “We support the family that lost, so they can pass this hard time and hard moment.”

Aljandao knew Alkadi through mutual friends and was his neighbor when the pair lived in Saudi Arabia.

For Aljandao, the things he will miss most about his longtime friend are his smile, spirit, and soul.

“For me, Addullah, he’s a man with a child[‘s] heart, you know?” Aljandao said, at times struggling to talk. “He loved to help people, support his friend[s]. He support[ed] his sisters, brothers, mostly his mom. She’s the world for him. He adored her. He loved her, respected her.”

“Personally, I am praying for him; I’m trying to make all my friends pray for him and remember him,” Aljandao said. “He always makes us laugh. He was there when everyone [needed] him.”

Aljandao wants everyone to know that Alkadi was a “great, great man, who has dreams and belived in knowledge. He wanted to get his degree from the U.S. And things happen, you know?”

[This post has been updated to reflect that Abdullah Alkadi’s remains were found in Palm Desert.]

The Riverside County Coroner’s Department said it is working with the LAPD to establish positive identification of the victim.

The circumstances of Alkadi’s death are not known at this time. News of Alkadi’s death comes exactly one month after his disappearance. An electrical engineering major, Alkadi was last seen Sept. 17 near his home in the 9900 block of Reseda Boulevard in Northridge.

Palm Desert is about 150 miles east of Northridge, or about a three-hours’ drive.

A press conference with LAPD Chief Charlie Beck will be held on Monday afternoon, at which time, more information will be provided, Smith said in a telephone interview with The Sundial.

“Because the investigation is at a crucial juncture, further information surrounding this investigation will not be released until the news conference,” according to a press release issued by LAPD on Friday afternoon.

By 6 p.m., local news media were gathered at Alkadi’s home.

“They are under shock, you know,” said Sam Salmanalmutwa, a friend of Alkadi, in a statement to the media. “They couldn’t believe what happened. Because they sent their child to study not to get in this situation and involved in problems he shouldn’t be involved with.”

One friend of Alkadi could be seen talking on his cell phone inside the family garage, with tears streaming down his face.

Salmanalmutwa said the family would probably make another statement Saturday or Sunday afternoon.

“On behalf of the entire campus community, I extend our condolences to his family and friends during this heartbreaking time,” Harrison wrote. “We will continue to assist law enforcement in any way we can as they investigate the circumstances of his death.”

Social media was swift to react with the news of Alkadi’s death.

“This is extremely sad,” said Ayla Mirjafarli on Facebook. “What kind of sick animal would do this to a kid in college? I hope they find the person responsible.”

User @Apartment_1806 on Twitter said: “The news just broke my heart. Can’t possible imagine how his family is going through.”

There was no word Friday evening on a memorial service or funeral for Alkadi.

Alkadi is the second CSUN student to die in three months, after Armando Villa passed away in July as the result of fraternity hazing.

This story will be updated. Check back here for updates, and on our social media sites on Twitter, Facebook, and mobile app.

The Sundial Editor in Chief Andrew Martinez contributed to this story.