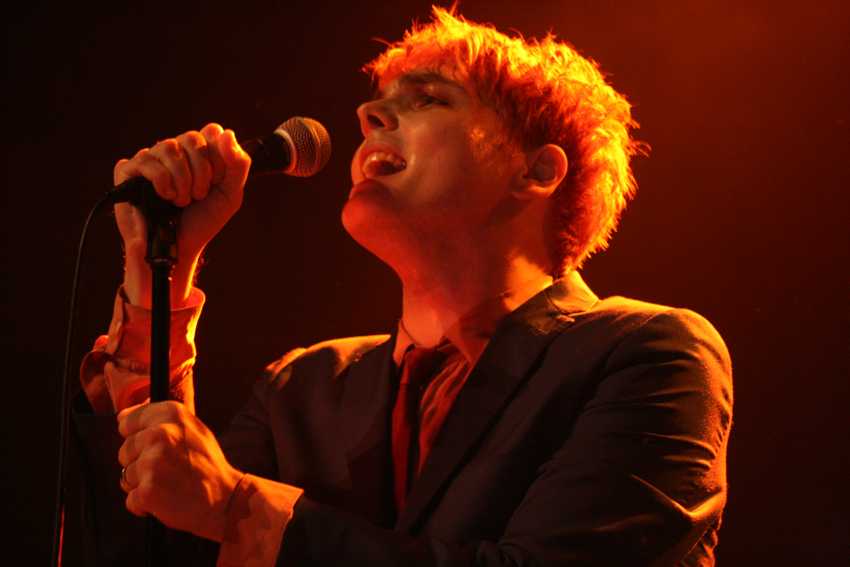 Anticipation is at an all time high within the walls of the Henry Fonda as hundreds of anxious fans wait for Gerard Way to take the stage. “He’s coming!… It’s almost time!,” shouted the girls in excitement, hanging on the front barricades as 10 p.m. drew near. Finally, the time approaches, the lights dim and a roar of screaming girls infuses the venue, welcoming the man they’ve been waiting for all evening.

The momentum of the evening prior to Way’s set was strong as Philadelphia-based band The Eeries took the stage. Setting an energetic tone for the rest of the evening, fans were thrilled as ever as their orange-haired idol later appeared in a blue suit.

Throughout the evening Way and his band performed his new album, ‘Hesitant Alien,’ in it’s entirety. Whenever he got a moment to catch his breath in between songs, Way repeatedly thanked the crowd for giving him an opportunity to start a music career again.

One lucky fan’s evening was made when Way invited her to to the stage to perform tambourine alongside his band for one of his new tracks.

While Way may have taken some time off to pursue other aspirations such as comic books, his performance on Tuesday night showed no apprehension, but rather an affirmation of the music career he was born to fill.

With shoegaze-inspired jams like ‘Action Cat,’ and round up anthems like ‘Get the Gang Together,’ Way has channeled and instilled a Brit-pop presence in his music.

The former frontman of the recently deceased My Chemical Romance, took over Los Angeles this past week as he played two shows and made his first solo appearance on Conan.

Earlier this month in honor of the release of his first solo work, Way met with over 300 fans at Hot Topic in Hollywood to autograph their copies of ‘Hesitant Alien,’ which was released September 30.

It’s evident that whatever Gerard Way may choose as his career path, he will always have a strong fan base force to support him.

Gerard and his band will be making their way across the states throughout October, and across the pond starting early November.