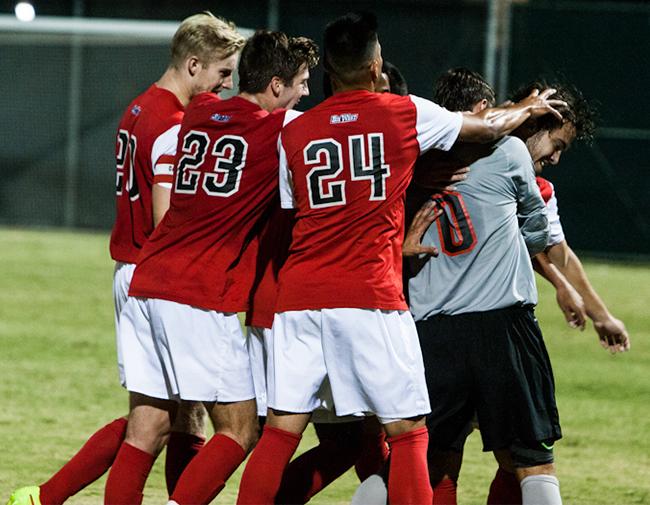 Matadors celebrate the first goal of the game by Marino Peixoto giving them a 1-0 lead in the first half. The CSUN Matadors finished the game with a 2-1 victory against the Riverside Highlanders. Photo Credit: Kelly Rosales/ Contributor

Coming into Saturday night’s matchup with the UC Riverside Highlanders, the Matadors had not scored a goal in 213 minutes, and hadn’t won since a Sept. 25 home win over the CSUB Roadrunners.

A first half strike from the foot of junior midfielder Marino Peixoto and a game-winning second half header from senior forward Sagi Lev-Ari broke those streaks as the Matadors (5-7-2,1-3-1 Big West) defeated UC Riverside (2-9-2, 1-3-1 Big West) 2-1 and won their first Big West game this season.

With 8:19 left in a scoreless first half, fresh substitute sophomore defender Gabe Robinson sent a cross towards Peixoto, who curved the ball into the top right corner of the net. Junior goalkeeper Ashran Khosravi, who had made stellar plays to deny the Matadors throughout the first 37 minutes, made a diving effort but could not place a finger on the ball.

“(Robinson) made a great run out wide, he saw me open in the middle, i screamed for the balll he gave it to me,” Peixoto said. “I saw the keeper was kind of middle, and I just like to hit it, and was fortunate enough to go in.”

Players and coaches erupted in celebration for the goal, head coach Terry Davila among those who ran out and cheered.

“I’m very happy for them,” Davila said. “I’ve been through it before, our kids are used too winning over here and producing goals. They did a good job of coming back and putting their head together, and believing that we can score, a lot of it is mental.”

20 minutes later, CSUN would strike again as junior midfielder David Turcios juked a defender along the goal line and chipped the ball towards the head of Lev-Ari, who easily placed it past Khosravi for his eighth goal of the season to give CSUN a 2-0 lead in the 56th minute.

“I just knew that I had to take my guy, take him, take out Sagi, put it on his head, automatic goal, all the time,” Turcios said.

The Matadors challenged Khosravi and UC Riverside after Lev-Ari’s goal through the last five minutes of the game, but failed to put the game out of reach and find the net for a potential 3-0 lead.

“We could have had a couple of opportunities to finish off the game, and we didn’t,” Davila said. “When you don’t score, it keeps them in the game, and Riverside did a good job of staying in the game.”

In the 86th minute, freshman midfielder Ricardo Ruiz and senior midfielder Juan Mendoza strung together a few passes and a cross for sophomore midfielder Romario Lomeli, who headed the ball past junior goalkeeper Adam Hobbs that was called a goal seconds after the shot.

The sudden 2-1 deficit prompted the Matadors to make quick substitutions to hold the Highlanders in the closing minutes. Davila attributed the late goal to a matchup on the cross to Lomeli.

“We got to do a better job of denying the cross,” Davila said. “The first thing you do is deny the cross. The second thing you got to match up in the box because the ball has to be scored through the middle, and you have to be very alert on the weak side.”

CSUN drained the clock in the final three minutes by setting up slowly for a free kick near midfield and Lev-Ari dribbling between defenders to bring the clock to the one minute mark.

The Highlanders would take a late possession deep into CSUN territory to set up a corner kick with 30 seconds left, but sophomore defender Stephen Copley earned a yellow card on a foul with 12 seconds left to end the threat and the game.

The Matadors shot 19 shots including nine on goal, an improvement from the 15 they shot October 11 against UC Davis in a 0-0 tie. After that game, Davila said the Matadors needed more shots on goal, and his team responded.

“We’re all good shooters,” Turcios said. “We got to just put it on target, get our rebounds. (The shots tonight) were almost all on target.”

CSUN will head on a three game road trip in the South Conference, with match ups at the CSUF Titans, Highlanders and the No. 5 UC Irvine Anteaters in the next two weeks before returning home to host UC Irvine Nov. 1.