Women’s Volleyball: Matadors suffer a sweep at the hands of UCSB 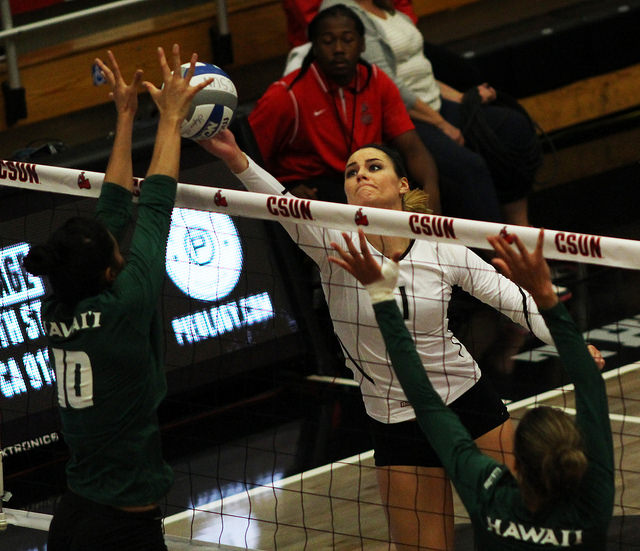 Despite the hard effort and the close scores, the Matadors (13-5, 4-2) were not able to gain the victory in their matchup against the UC Santa Barbara Gauchos (9-9, 4-3) on Saturday.

The first two sets were dominated by UC Santa Barbara for the majority of the time as the Matadors were not able to maintain a lead. However, the Matadors did keep the scores close.

Towards the end of set one, an attack error by the Gauchos and kills by seniors Sam Kaul and Natalie Allen were able to even the score at 24-24. A kill and a service ace by UCSB ended up sealing the set at 26-24.

The Gauchos kept this lead until the set’s end, giving them another win at 25-20.

The third and final set could have gone either way, as the Matadors were able to maintain a two-point lead for the majority of the set. Both teams continued to go point-for-point until the end of the set. A kill by Kaul brought the score to an even 26-26 but two consecutive kills by the Gauchos closed the set at 26-28 and declared UCSB as the winners.

Although the Gauchos outhit the Matadors at .263 to .209, the team was still able to collect impressive individual stats.
Leading the Matadors was senior Casey Hinger with 13 kills and a hitting percentage of .376. Kaul and junior Danetta Boykin racked up 10 kills while Kaul hit a match-high .667.

Leading in digs were seniors Natalie Allen and Randazzo with 15 and 11 digs respectively while Randazzo served the team’s only two aces of the game. Coming up right behind them is freshman Lauren Conati as she put up a total of eight digs and 34 assists.

The Matadors will be playing their second home-game of the season against UC Davis on Friday, Oct. 24 at 7 p.m. which will also be streamed on ESPN3.