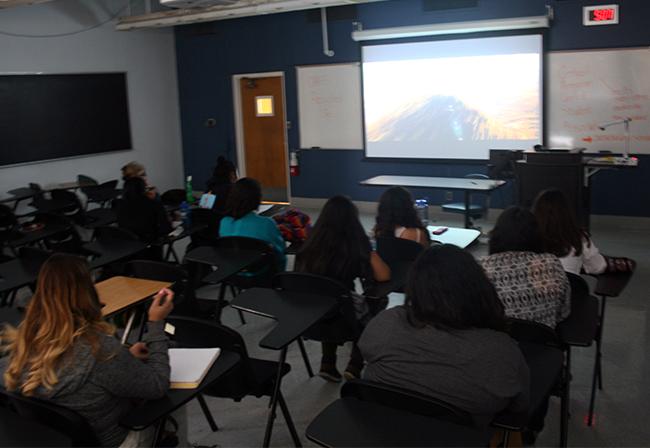 CAUSA members had a film screening on Oct. 16 at CSUN campus as a way to bring awareness of social injustices. The film discussed the landfills that are close to Guatemala City and how toxic they have become. Photo Credit: Rasta Ghafouri/ The Sundial

Karen Gonzalez knew from the moment she began attending CSUN in Fall 2012 that she wanted to be a part of the then five-member group of the Central American United Students Association. After one of her professors promoted the association, Gonzalez was inspired to become involved in the group.

Gonzalez, Central American Studies major, who is now a senior and the Chair of CAUSA carries the responsibility of representing the association and bringing awareness to the campus community.

Gonzalez believes that CAUSA is important to the CSUN community because it focuses on cultures working together instead of standing alone.

“Individualism has become a problem to the community because it has created individuals who are no longer sympathetic or compassionate to real issues going on in the world,” Gonzalez said. “Therefore, CAUSA’s role is to empower individuals to take back their roots of being human, embrace each other, and give back to the community without expecting anything in return.”

CAUSA has held true to that motto by organizing events like food sales that give the proceeds to elementary schools in Guatemala. According to Gonzalez, thier food items actually have a deeper meaning behind them than one may think.

“Anything that CAUSA sells for food sales will not consist of any meat, poultry or fish,” Gonzalez said. “The reason being is because we focus on the justice for the people who work in slaughterhouses, the health of people and the environment.”

CAUSA also makes efforts in collaborating with other organizations on campus. Dr. Linda Alvarez, assistant professor of Central American studies and one of CAUSA’s advisors, understands that joining forces with other associations not only brings more attention to CAUSA but also emphasizes how they can fight for the same causes without having to be from the same place.

Alvarez recalls a specific event during which CAUSA teams up with the American Indian Student Association for their annual Indigenous Resistance Day.

“It happens around the same time as Columbus Day and it provides a different perspective related to that holiday,” Alvarez said. “It’s a day to celebrate indigenous cultures and history which we know is so pertinent to our own history.”

Not only has CAUSA collaborated with other groups but they have urged that those who are not Central American to join their association.

Benjamin Bivian, double-major, is the historian for CAUSA and is an example of these efforts.

Although Bivian is a native of Jalisco, he had no reservations about joining the association and even credits the group for giving him a greater desire to bridge the gap between all latino/as.

“I have been utilizing the resources and opportunities that (CAUSA has) given me,” said Bivian. “This organization has helped me further complete my goals of trying to bring all people of Latino descent together rather than try and stay separate.”

Alvarez said she has seen each individual member grow into exceptional leaders who have continued to help people become more socially conscious.

CAUSA plans on pursuing extensive projects in the future that deal with social injustice. One of those projects is promoting a boycott of sweatshops.

“This is something we plan to start soon, but we are aware that it will take time and a long process,” Gonzalez said. “We cannot do it alone and we shall not do it alone as it affects all underrepresented communities.”

CAUSA has continued to grow in social consciousness as well as size and they are planning to keep shining a light on moral and social issues.

“We plan to create more awareness of the Central American community and culture and get rid of the mainstream culture (individualism, competition, patriotism and materialism) that has deteriorated our community,” Gonzalez said.

If you are interested in joining or learning more about CAUSA visit the CAS/AIS Cultural Center across from the Art Gallery on Wednesdays from 3 p.m.- 4 p.m.