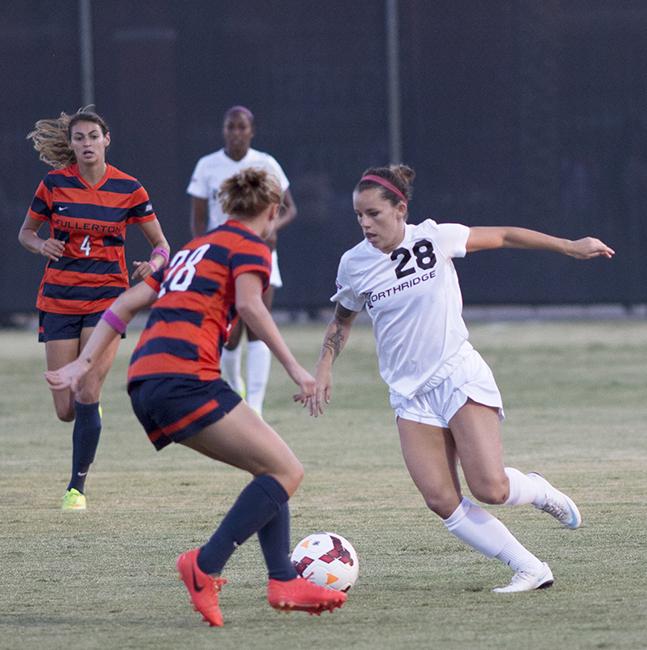 Junior Lyndsey Preston looks for a way past Cal State Fullerton's Colleen Ortega during the Matadors' match on Oct. 19, 2014. The Matadors fell to the Titans, 1-0, suffering their first loss in the Big West Conference. Photo Credit: Trevor Stamp/ Senior Photographer

Despite a 4-0 win streak to start out Big West play, CSUN women’s soccer (7-8-1, 4-1-0 Big West) took their first loss in the conference to Cal State Fullerton (4-7-4, 2-0-2 BWC) Sunday at Matador Soccer Field. It took a penalty kick in the 57th minute by Titan Rebecca Wilson to slow the Matador’s roll.

Even though the loss serves as a reality check for the burgeoning Matador squad, they still sit atop the Big West with 12 points and a one game advantage in hand over the conference.

Cal Poly follows closely tied at 12 points and the Matadors upcoming opponent Long Beach State sits at 11 points to round out the top three.

The first half proved hopeful for the Matadors as they saw a 11-3 shot advantage over the Titans but play remained even as did the 0-0 score.

Second half play proved aggressive on both sides behalf with play heating up to produce a result. The aggression came to a head in the 57th minute as the Titans placed a hard cross deep to Wilson in Matador territory resulting in a foul in front of the cage. Wilson took the free kick driving the ball hard upper right on frame and outside the reach of Matador goalie Jovani McCaskill.

“You mean a goalie’s worst nightmare,” said McCaskill about the penalty kick.

The Titan goal visibly shook the Matador’s energy for the remainder of the half and kept play at a gridlock between the two teams.

Despite the result, the Matadors lead in shots with 16 to the Titan’s 7 but never capitalized for the equalizer.

The Matadors look to cover up this Big West blemish as they hit the road again for two more matches starting at Long Beach State Thursday Oct. 23 with kickoff at 7p.m. The following Sunday the 26th they see UC Irvine with kickoff at 1p.m.