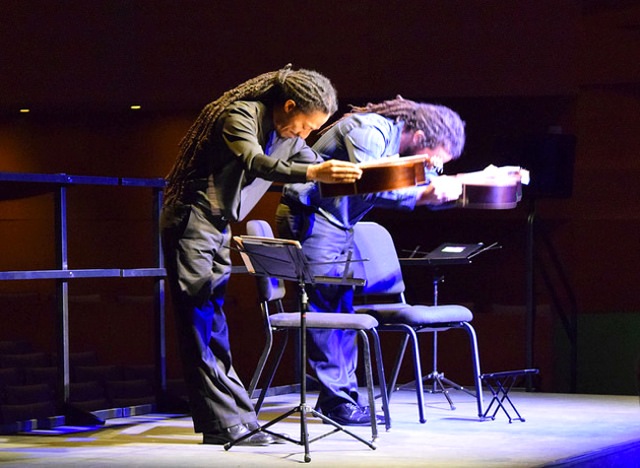 Joao Luiz and Douglas Lora of The Brasil Guitar Duo encompassed all that is the classical genre, but with a slight latin flare during their set at the Valley Performing Arts Center (VPAC) Thursday.

This incredibly talented duo, a 2006 winner of the Concert Artists Guild International Competition joins the VPAC as part of a small tour of shows in North America.

This performance was unique and invited 200 patrons to sit on the main stage. The nearly sold out show was compiled of music students and classical music lovers of all ages.

As the first string was picked, you could immediately see the intimacy exchanged between the guitarists as they created tones of harmony with a unified sound.

Both were avid musicians, never stifling one another’s skill.

Each piece was different, and incorporated movements from various European artists of classical and baroque periods.

Every song was heavy on scales, bends and graceful finger-work, staying consistent with theory of a classically trained artist.

Both guitarists played with their eyes closed, rarely looking at their sheet music, playing effortlessly. Luiz rested his cheek on his guitar as if it were a part of him.

The intensity of the music progressed as they began the sonata (a piece created for a solo instrument or one instrument with accompaniment) a four movement piece that is very long in length.

Luiz and Lora only paused briefly to fine tune their instruments. Throughout the evening, the duo were telling a story with their guitars. The audience could feel the emotions of the characters while the sonata was creating a trance-like feeling among the hall.

Overall an incredibly impressive showcase of talent, not only for classical music, but guitar musicianship as well. The music may have not been enjoyed by the younger crowds, but their skill is irrefutable and appreciated.