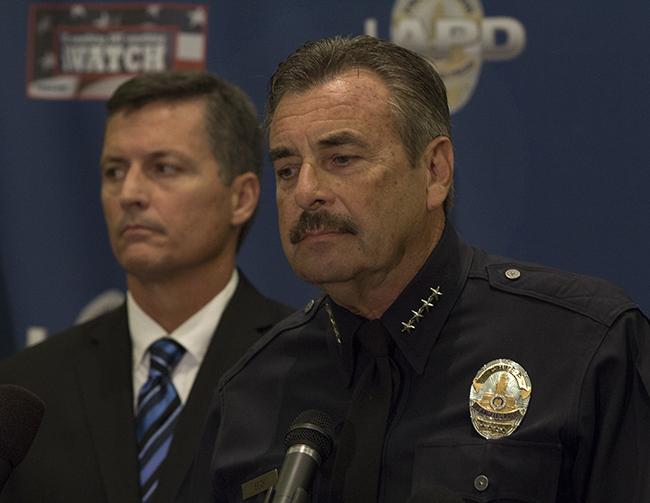 LAPD Chief Charlie Beck made an update on the current investigation into the death of CSUN student Abdullah Alkadi. "Not the victim's fault, but a tragic outcome," Beck said about Alkadi, who went missing Sept. 17, 2014 and found dead on Oct. 16, 2014. Photo credit: Trevor Stamp

As the investigation into the disappearance and death of the 23-year-old Alkadi continues, Beck remained tight lipped on the particular circumstances of the case. Beck would not elaborate on whether the killing occurred before or after the investigation or where.

Two people were arrested Oct. 16 in connection with Alkadi’s death and disappearance which occurred on Sept. 17, but only 28-year-old Agustin Fernandez of Long Beach was charged with one count each of murder with a special circumstance, robbery and carjacking.

However, the second suspect has not been ruled out from the investigation, Beck said.

“That [second] person — to my knowledge — has been released, but as the investigation continues, there may be additional charges, but there may not,” Beck said. “Many times, as detectives work through these very serious cases, [and] until they get people in custody and conduct the interview, it is not clear what happened or who was involved, and the nature of that involvement is not clear.”

In mid-September, Alkadi put up for sale on Craigslist his Audi A6 with an asking price of over $30,000, Beck said.

“Fernandez killed Alkadi in an attempt to keep both the Audi and the purchase price, ” Beck said.

The case was presented to the Los Angeles County District Attorney’s office Monday afternoon, Beck said, and Fernandez’s arraignment has been postponed until Nov. 17.

“Every indication, as we’ve said, is it [the murder] occurred in close proximity to the time that he [Alkadi] met him [Fernandez] on Sept. 17,” Capt. Billy Hayes, commander of LAPD’s Robbery-Homicide Division said. “The Riverside County Coroner’s office is still doing the investigation of that; the forensics of that and not all of the pathology is back.”

Beck did not also release the circumstances of the arrest.

“The details of the arrest will remain confidential, ” Beck said. “The detectives were very, very concerned about the purchasers of the vehicle from the onset of the transaction.”

LAPD Robbery-Homicide detectives and detectives from the Riverside County Sheriff’s office were able to recover Alkadi’s remains in the early morning hours of Oct. 17, as originally reported.

Hayes would not comment on how investigators were able to locate Alkadi’s body, or if the suspect confessed to the murder or led them to the location of the body.

There was evidence recovered from Alkadi’s car that indicated it was a part of the crime scene and used to transport Alkadi’s body, Beck said. He also said there had been several contacts between Alkadi and Fernandez and that at least, initially, Fernandez had met Alkadi while he was alone at his home in Northridge.

“It took place over two or three days as many of these transactions do,” Beck said. “The message for the public here is that you have to beware when using online and Internet site to sell anything. All the opportunities for sale are also an opportunity to let unwanted people into your life.”

Joining Beck and Hayes at the podium were Los Angeles City Councilman Mitch Englander and Saud al Hassan, vice consul of the royal embassy of Saudi Arabia who was there to represent the Alkadi family.