Choosing a side in the Harris/Greenwald feud 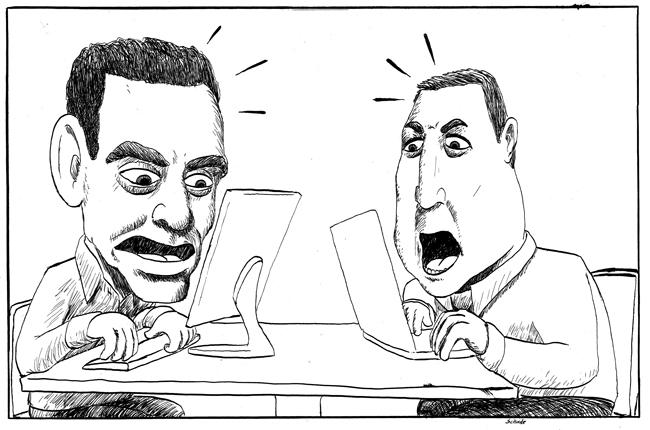 This conflict began long before the showdown with Ben Affleck on “Real Time With Bill Maher.”

In the weeks since it re-erupted, the digital feud between neuroscientist and secular humanist  Sam Harris, and investigative journalist Glenn Greenwald, has brought critics, neutral observers and journalists into another ideological crossroad.

After Harris and atheist comedian and television host Bill Maher talked about Islam and the predicament of Islam’s necessity into religious moderation, the reaction by actor/director/new “Dark Knight” Affleck brought the argument back: out of any and all religions, no one may criticize Islam.

Now, I will first say that Affleck is not an expert on Islam. He criticized Harris’ knowledge of the religion, knowledge that has been assured in all of his books criticizing religion in general.

But I am also not really here to explain why Harris was in the right. His statement that “Islam is the motherlode of bad ideas” went a little too far for me.

Yet, I admire his defiance in remaining critical. After all, he has every right to freely criticize any religious group. He has the First Amendment on his side. But so does Greenwald — to a degree.

Greenwald, the man who made Edward Snowden a popular and reviled name, has openly criticized Harris’ support in bombing ISIS and jihadists in general. He explains attacking ISIS and this new “Khorasan Group” as yet another Middle East folly.

So the United States has had a bad record of getting into squabbles in the middle of former Mesopotamia. The case for war against terrorists fits within Harris’ own ideology.

The fight against murderous fanatics is one that I have supported and happen to agree with Harris about. But against what Greenwald has portrayed Harris as, Harris was not a supporter of the Iraq War or a “warmonger.” Greenwald has also suggested that Harris is someone who views all Muslims with great malice or — in his words — “animus.”

The suggestion from Harris is that Greenwald has declared the former a racist. Greenwald has said this is not true, but I suppose their emails would provide all of the answers.

Now, for my argument.

Harris, to start, does not hate Islamists. In fact, he has expressed his admiration of former jihadist Maajid Nawaz, as well as his support of Nobel Prize winner Malala Yousafzai. He does not fit the label of “Islamophobe.” He does, however, declare Greenwald as being a Muslim apologist.

This leads into the argument that Harris has asked, “Can liberalism survive?” It has persisted through skepticism and alterations to the status quo. This framework ties into the criticism of religion, going back to the days of heliocentrism and the philosopher David Hume.

As someone who stands apart from both political parties and many of their ideologies, Greenwald would appear to fit the definition of “liberal” well. But his attack on Harris’ freedoms contradicts Greenwald’s purpose as a journalist. As I said, he broke the Snowden story.

In my eyes, he has been one of the most vocal proponents on free speech. He fearlessly published that information, and the threat of arrest has been undertaken.

As an open critic of established foundations (the US), Greenwald should not defame a possible ally who practices the same ability to criticize.

From Harris’s perspective, Greenwald is “engaged in a campaign of pure defamation.” He wrote this in a piece about the machinations of defaming someone, referencing Greenwald’s attacks on him and the “New Atheism” movement.

My own observation of the whole feud has been confounding. I admire both men, but Greenwald’s illogical attacks are not in his character. I side with Harris on the idea that free speech comes first. It is not racism, it is not generalization, and it is not ignorance.

What stems Harris and many freethinkers’ ability to openly criticize religion is the lack of fear or repercussions.

Death can be the result of criticizing religion. Consider the Danish cartoonists. Or further: Iran’s Ayatollah Khomeini’s fatwa on the English writer Sir Salman Rushdie for writing “The Satanic Verses.”

Greenwald’s criticisms of Harris sound not too dissimilar from what world leaders said in the late 1980s about Salman Rushdie. The idea is he should have known better.

Though Harris’s statements went somewhat far, Greenwald’s resentment is mere punditry. My views of both men have been altered in the aftermath of this recent fight. As such, I have to side with Harris.

His arguments stand as justification for his beliefs, and it may just be Greenwald’s way of using his skills as a lawyer to wrench what Harris has said about religion.

Limitation on what people say is existent. For those against such censorship, to have the urge to mimic their own disgusts toward another intellectual, is discouraging and annoying.