Downtown LA bar has 1Up on competition 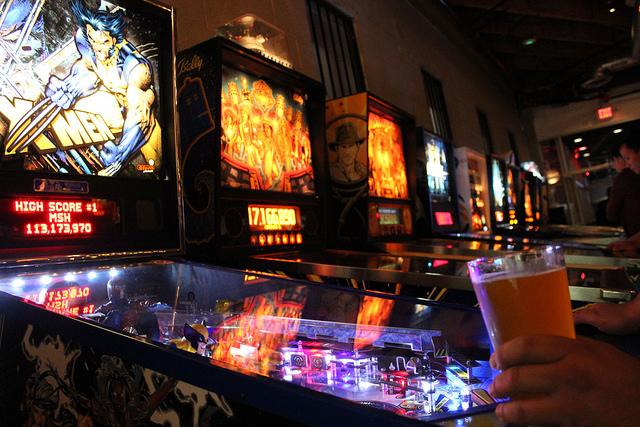 With Downtown Los Angeles becoming a hotspot for nightlife in recent years, it can be difficult for a new bar to stand out from the crowd. At EightyTwo in the Arts District, the answer is as simple as video games.

Now these aren’t video games you’d find at your local Dave & Buster’s, but instead, they are true, old school arcade games. But this “barcade” features the best of both worlds.

From the outside, EightyTwo looks like a typical warehouse, a brick building painted in hues of blue and fuchsia with no other distinguishing features. But upon entering, you’ll feel like you found the Warp Zone of “Super Mario Bros.”

Your senses hit overload as the sounds of hadukens and finishing moves, mix with cheers and jeers. This is accompanied by the flicker of screens and lights. The whole area is reminiscent of Flynn’s Arcade from the movie “Tron” but caters to adults.

Nearby a DJ plays a mix of 80s and 90s to keep the retro theme going. The room houses nearly 25 arcade cabinets, which are only a quarter each and has a Tech Noir feel to it.

The crowd is a mix of geeks and gamers engaged in “Mortal Kombat” to hipsters who have no idea how to operate a joystick.

The games themselves are rotated on a regular basis, so you may find different games on your next visit.

On a Friday night, the most popular games include, “The Simpsons” arcade game, a rare six-player “X-Men” game and of course, “Street Fighter II”. This game proved especially popular because it was projected above the bar where patrons could watch the carnage unleash.

The bar has a selection of 10 draft beers and various spirits. It can also get crowded on a Friday or Saturday night so be prepared to wait.

Their specialty cocktails are a bit pricey, at around 12 bucks, but they feature some interesting  drinks. The n00b contains vodka, lemon, honey, lemongrass, apple juice and bee pollen. The Kill Screen is for those who love spice which contains tequila, lime, agave, strawberry, blackberry, jalapeño and cucumber, and you can’t go wrong with Wizard Mode.

Another room features pinball games, some of which are newer than the arcade games. “Indiana Jones,” “AC/DC” and “Star Trek” were some of the most popular games. The pinball area was less crowded than the arcade area but just as boisterous.

Both rooms contain change machines which can be slow at times, resulting in long lines near the entrance of each room.

Those seeking a bit of calm from the game chaos can relax in an open air patio between the two rooms. Even though the music and noise carries over from the two rooms, the patio has a calm, intimate feel.

A few trees and dim lighting makes this area quiet enough to have a conversation or enjoy your drink. Occasionally, there is also food from a nearby taco stand or food truck.

Overall, EightyTwo has definitely taken the fun of arcades to the next level.

It’s proximity to the Little Tokyo/Arts District station on the Metro Gold Line is also a plus. EightyTwo is located at 707 E. 4th Pl. near Alameda Street in Downtown Los Angeles.