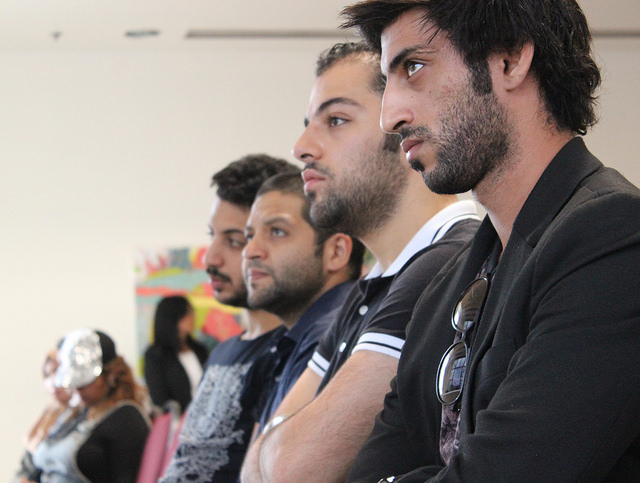 Family and friends attended the memorial gathering of Abdullah Alkadi, held at CSUN on Oct. 21. Abdullah's brother, Ahmed Alkadi, said a few words during the gathering. "Abdullah was my brother, but your brother as well," he said. Photo Credit: Araceli Castillo / Photo Editor

Passages from the Quran played in the opening half hour of a gathering organized to mourn the death of CSUN student Abdullah Alkadi.

Students paid their individual respects in-between classes, and staff members from the International and Exchange Student Center and Student Counseling Services lined the side and back walls, greeting familiar faces as they entered the Flintridge Room of the University Student Union on Tuesday afternoon.

The memorial was organized after Alkadi’s body was found late Thursday night along Interstate 10 in Palm Desert, ending the month-long search for the Saudi-born student.

William Watkins, vice president of student affairs, expressed his condolences to family and friends of Alkadi while admiring the student body for their compassion and support toward one another.

“He was such a promising life that is not with us anymore,” Watkins said. “We’re grateful for the huge turnout from the campus community, standing in solidarity through this difficult time,” Watkins said.

Doctor S.K. Ramesh, dean for the college of engineering and computer science, took to the podium, describing Alkadi as, “a bright young man with a bright future who left too soon.”

“We’re a community here and we care for each other,” said Ramesh.

Abdulrahman Albatti is a close friend of Alkadi, who studied with him in Chicago. It was Alkadi who motivated Albatti to move to Los Angeles and attend CSUN.

“I wouldn’t be here if it wasn’t for him [Alkadi]; he told me to come to CSUN with him,” said Albatti.

Alkadi’s older brother, Ahmed, spoke of the sorrow that this could happen to anyone and advised to be careful.

“What happened to our family was a tragedy,” he said. “Life is not as peaceful as we think it is. I don’t want to see this happen to someone because you trusted the wrong person.”

Ahmed Alkadi urged that fellow students of his brother weren’t just peers in the classroom, but in life as well.

“Abdullah was my brother, but he was also your brother,” he said. “Pray for him.”

Student Counseling Services advisor Dr. Veronica Sullivan advised students about resources they can take advantage of to get help if they’re feeling overwhelmed.

“Grief is an individual process we all go through,” she said. “There is no right way, there is no wrong way to deal with it. We hope that we can all find strength in our community at this time.”