Men’s Soccer: CSUN fails to piece together consecutive wins after loss to Fullerton 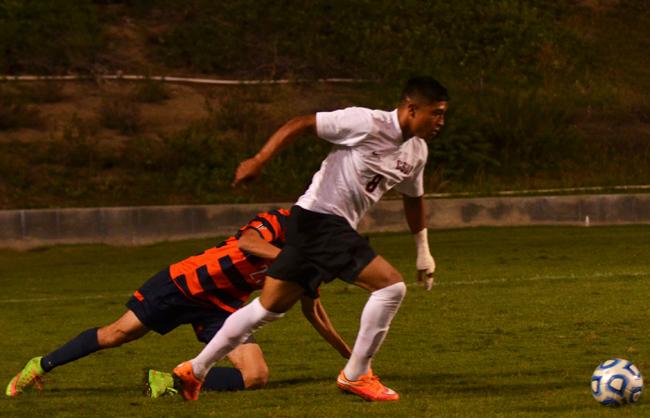 Senior forward, Edwin Rivas, leaves a Cal State Fullerton defender on the floor before crossing the ball into the box for a header. The chance was cleared as the Matadors lost to the Titans 1-0. Photo Credit: Vince Nguyen/Photo Editor

The Titans’ early pressure broke a tight and resilient Matador defense in the 19th minute. After bossing and controlling the midfield for much of the first half, CSUF sophomore midfielder Ritchie Gonzalez found space and took a shot at goal. Junior goalkeeper Adam Hobbs saved the first shot, but Titans senior forward Marc Fenelus was there to grab the rebound and slide it into the open net for his fifth goal of the season.

“We were getting kicked around all over the field,” Hobbs said, who recorded three saves for the night. “They were manhandling us in the first half. We just came out asleep.”

The Matadors immediately woke up and began battling for the equalizer. CSUN earned a corner before halftime, only to have captain junior defender Trevor Morley head the ball toward the goalkeeper.

“We outplayed them in the second half,” Hobbs said. “We just had a hard time finding the back of the net.”

The Matadors pressured the Titans for most of the second half and had a few good chances to equalize. Sophomore midfielder Nicolas Camacho took a shot from distance just before the hour mark, but was it directed straight toward the goalkeeper. Moments later, junior midfielder Marino Peixoto shot his free-kick inches wide of the corner post.

A barrage of attacks before the final whistle wasn’t enough for CSUN to get their equalizer, and nearly conceded another goal before time. The Titans took a quick free-kick and caught the Matadors off-guard, only to have their shot bounce off the top post. CSUF were able to put the ball into the back of the net with the rebound, but the goal was called for offside.

As the Matadors succumbed to a tough 1-0 loss, head coach Terry Davila thought CSUN weren’t mentally and physically prepared enough for the game.

“Fullerton taught us a lesson – how to be physically tough,” Davila said. “You got to be able to put your body on the line and I don’t think we’re willing to do it. We chased the game and I think we gave the game away.”

CSUN are in a must-win situation in their next road game against No. 3 UC Irvine Saturday evening, and Davila will hope his team brings their A-game.

“We got to bring our physical and mental toughness for that game,” Davila said. “Our season is on the line, and we got to be ready for a war.”