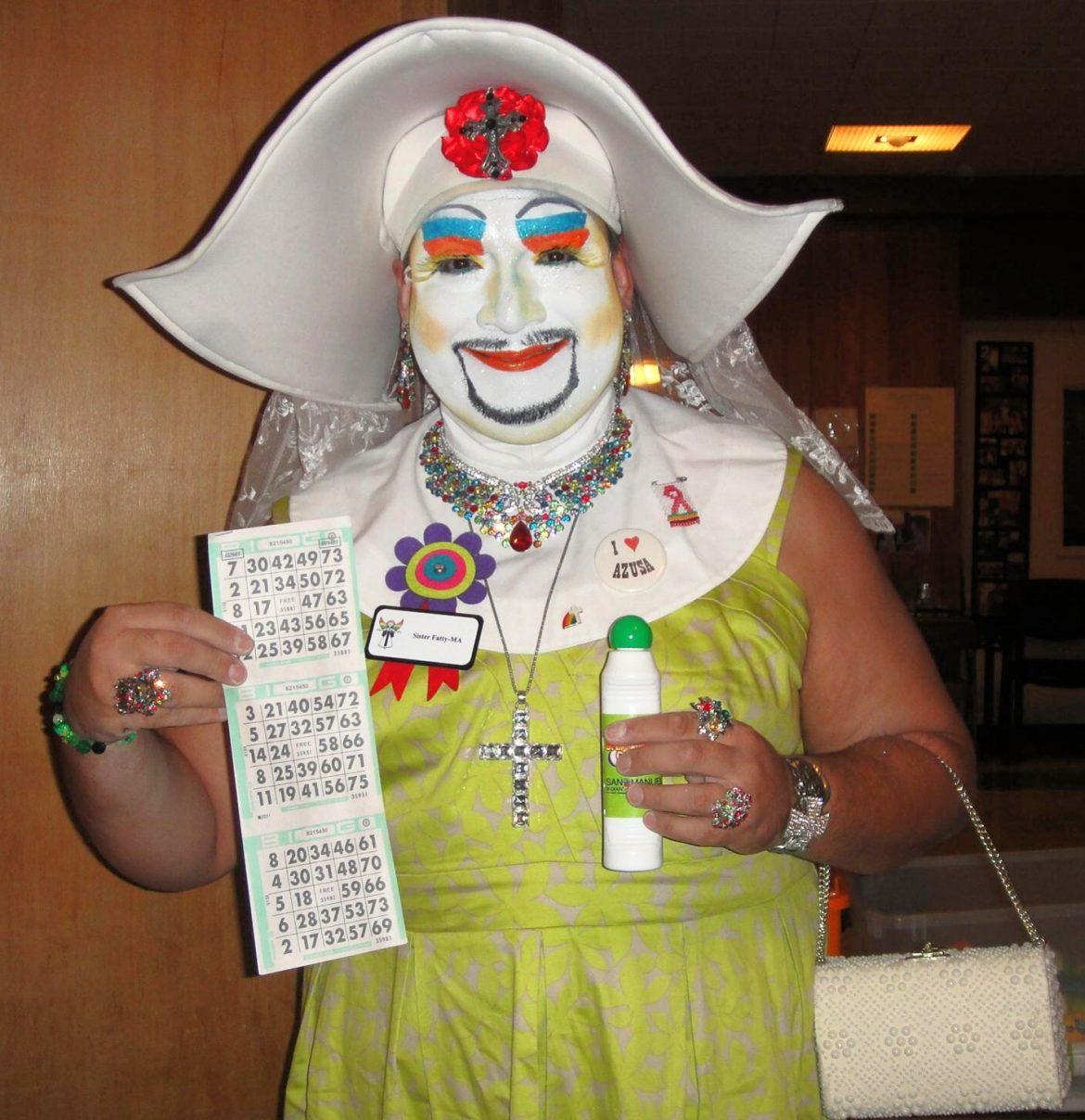 Sister Fatty-Ma, of the Sisters of Perpetual Indulgence, at a charity bingo event at the Westminster Presbyterian Church in Pasadena.

“Bingo!” a woman calls out as she waves the first winning bingo ticket of the night.
As she makes her way to the podium where the announcer stands other attendees take aim and pelt her with their balled-up losing bingo tickets. She laughs and approaches a statuesque woman with big curly hair for her prize. She then takes her seat and the announcer begins to pull another group of bingo balls from the wire bingo ball tumbler.

For most, this is a fun Tuesday night of bingo, for Roxy Wood, the tall bingo announcer, this is just another night of work. Dressed in a striped dress so tight it could very well be cutting off her circulation, with long, talon-like nails and a full set of fake lashes, Wood performs as the bingo hostess in full drag.

She calls out the bingo numbers fast, challenging the crowd to listen intently. If you happen to get caught up in calling a false bingo, Wood will be waiting to smack your derrière with a paddle made specifically for such an accident.

But, despite the silly and sometimes raunchy atmosphere, this bingo event, and many like it, benefits a very serious cause. This particular event, put on by Legendary Bingo, benefits AIDS research and the Pasadena AIDS Service Center.

During the Sept. 30 Drag Queen Bingo event at the Equator in Old Town Pasadena, Wood makes sure everyone is having a good time. Her loud bingo mantras and raunchy references spur laughs throughout the bar, which is relatively packed for a Tuesday night.

The fact that the charity event is hosted by a performer in drag pulls in many attendees, but according to Wood this persona is often not seen for what it really is, a performance.

Despite her apparent comfort in playing her role as the over-the-top bingo announcer in drag, Wood admits that this is merely a uniform for a job.

Preferring to be referred to by her/his stage name, Sister Fatty-Ma, a member of the Sisters of Perpetual Indulgence, points out that there is not only a big difference from trans or cross-gender people and drag performers, but there are also many variations of drag itself.

The Sisters of Perpetual Indulgence is a group of drag performers who take on the drag interpretation of Catholic nuns while hosting bingo events that benefit charity organizations and local pride centers.

The Sisters wear cornets and thickly-applied, almost clown-like makeup. Though some may see their interpretation as offensive or sacrilegious it is not meant to be so.

“We take on a very powerful identity and role of the catholic nun but we do it out of respect and reverence, we don’t do it out of mockery,” Sister Fatty-Ma said.

“We do it for some serious issues, and those issues and those topics deserve attention, and a serious sense of respect,” she said. “In terms of what the nuns put on, the face and drag persona, it’s not meant to be serious, yet the issues that we represent are.”

Some of the topics that the Sisters represent include sexual tolerance and gender equality. Through their work they benefit both LGBT and AIDS related causes.

According to Fatty-Ma “nun drag” is just one of many forms of drag. “Ours is more activist drag, we’re advocates of the cause.”

Along with doing drag comes many misconceptions. Although some see drag as being a lifestyle Wood claims that for many drag queens, including herself, it is a form of entertainment and employment.

“I don’t know many drag queens that drag is an everyday lifestyle. It is your uniform basically. If you’re a police officer then you’re not going to wear your uniform to mow the lawn.”

For many people there is also a misconception of “drag queen” and “tranny” being interchangeable titles. For Wood, who is both transgender and a working drag queen, the difference is distinct.

According to Sarina Loeb of the CSUN Pride Center, drag is misunderstood by many despite growing media attention.

“A lot of people get confused with somebody who is a drag queen, or transgender, or cross-gender,” Loeb said. “There is an assumption that transgender and drag are the same thing.”

Contrary to trans or cross-gender persons for which that title defines their lifestyle and life choice Loeb said “drag can be seen as an art form or performance.”

“Media is giving drag a little more attention with Ru Paul but, that has also brought on misconceptions,” Loeb said.

Despite his elaborate drag persona Ru Paul, a television personality and famous drag queen, dresses in masculine attire when he is not performing, according to Loeb. Many assume that his drag identity his total identity, but it is merely a character he plays.

Aaron Saenz, President of San Gabriel Valley Pride and Treasurer of the Pasadena Pride Center works with the Sisters of Perpetual indulgence to raise money for the organizations he work with and others like them. Saenz said that drag performers are more of a “popular face” to a culture of gender bending.

“If you understand the difference between a transgender, a drag queen and a transvestite, all those different variations, then you start to understand that they are people,” Saenz said. “But that takes time and education.”