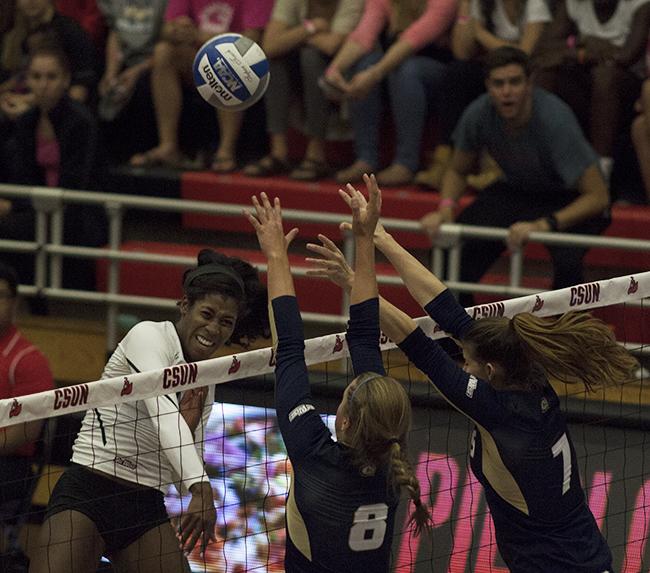 Junior Danetta Boykin had 17 kills and 40 total attacks for the Matadors in their Friday night matchup with the UC Davis Aggies. The Matadors fell to the Aggies in the fifth set. Photo credit: Trevor Stamp

This match against the visiting Aggies (10-10, 5-2) is the Matadors’ (13-6, 4-3) second consecutive loss after coming off of a difficult defeat at the hands of UC Santa Barbara.

The Matadors out-hit the Aggies with a .256 to their .171 but that was not of much help as they committed 15 service errors while the visitors had a total of 15 aces.

Head coach Jeff Stork is aware that the Matadors lacked in serving and passing and plans to figure out ways for them to do better.

“We got served 15 balls out and we got served 15 times,” Stork said. “With a 30-point difference in that regard, we didn’t deserve to win. We had opportunities to win but we didn’t necessarily deserve to. For us it’s back to the drawing board.”

Two sets into the game, both teams were tied 1-1. The Aggies showed more consistency in the third with back-to-back kills and aces and ended up taking the set. By the fourth set, the Matadors were on a mission to win.

Set four could have gone either way with the teams playing point-for-point. Eventually, the Matadors put up an 8-0 run that gave them a lead (9-19) that the Aggies would not be able to come back from.

The Aggies were able to shorten the lead at one point which brought the score to 19-24 but a final kill by senior Casey Hinger sealed the set at 19-25.

The deciding fifth set looked like it could have gone either way with the Aggies matching each lead that the Matadors would create early on. A kill from junior Cieana Stinson gave the Matadors their last lead of the night at 9-10. Soon-after, the Matadors endured 5-1 run in favor of the Aggies. A kill by senior Natalie Allen put the Matadors at 14-12 but service error by Hinger gave UC Davis their set point.

The Matadors’ second home game did not have nearly as much energy as the first and Stork wants the team to be able to re-create the cohesiveness that was showcased in their home opener.

“Right now, it’s a little disappointing for (the Matadors) I’m sure, as it is with me,” said Stork. “We have outstanding, unbelievable talent. We just have yet to string it together in a fashion like we did against Hawaii. We have to figure out a way to control it.”

Stinson led the Matadors with a team-high of 21 kills and a hitting percentage of .331 on 51 swings while junior Danetta Boykin followed with 17 kills (.275). Hinger was able to put up 12 kills, nine digs, five blocks and two of the team’s four aces.

Senior Kelcie Randazzo had a match and season-high of 24 digs and freshman Katie Sato put up 14 digs while freshman Lauren Conati added 55 assists and eight digs.

Although the Matadors were dealt a difficult loss, they have nine more games to try and get back on track.

“Tomorrow the sun is going to come up and we are going to have to play another match,” Stork said. “We have to look at each other, talk to each other and try to figure it out. We got nine more matches and we’re going to try and win as a team.”

The Matadors will be playing game two of their three-game homestand against UC Riverside on Saturday, Oct. 25 at 7 p.m.