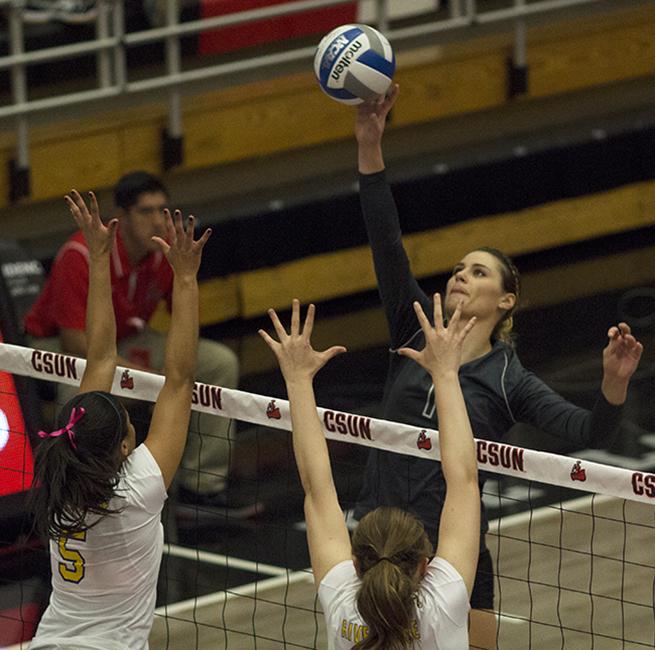 The last place Highlanders team gave CSUN some trouble through the first two sets but the Matadors came out of the locker room ready to close the match.

Four Matadors finished the match with double digit kills as the team totaled 63 kills with a .353 attack percentage. Junior Danetta Boykin lead the group with 15 kills, while junior Cieana Stinson followed with 14 and senior Natie Allen chipped in 13 kills respectively. Freshmen Lauren Conati chipped in 52 of the team’s 62 assists.

Boykin said she does not think anybody can stop the Matadors’ attack.

“Our attacking is improving every play and everyday,” Boykin said.

She said the match served as a reminder to stay focused on playing their game but also having fun.

“We have to let go of what happened yesterday,” Boykin said. “We have to continue this the rest of the season.”

CSUN started the first set with a 7-1 lead over the Highlanders. Boykin set the tone for CSUN with several kills to give the Matadors an early lead.

UCR would make the opening set competitive coming as close as 16-15, but the Matadors closed the set with Stinson having three of the teams’ final four kills and CSUN sealed a 25-17 set over the Highlanders.

The second set turned out to be a thriller as the teams exchanged six leads and held 11 tied scores. Finally, consecutive kills by UCR Bri Holmes sealed the 29-27 set. Holmes would finish the game with 11 kills.

Entering the third set, senior Sam Kaul and Boykin had eight kills respectively and Allen just behind them with seven kills.

The Matadors finished with a 25-14 set win in the third. Allen’s kill for set point would seal the Highlanders’ fate of being down 2-1

Again, the Matadors continued showcasing an attack filled offense. Boykin provided the fitting end to the match with one of her 15 kills that concluded the fourth set 25-14.

After dropping consecutive losses to UCSB and UC Davis, Head Coach Jeff Stork said he and the team were mixing things up and trying to find alternatives.

“We should of beat UCSB, and we should have beat Davis,” said Stork. The coach cited outplaying UC Davis in most of the statistical categories, but errors in serving and receiving cost them a win.

He said the team focused on fixing issues with serving and receiving.

“So much is about hitting and receiving,” Stork said about the Matadors’ struggles in the second set against UCR and the in the loss against Davis. Both teams finished with seven serving errors and seven receiving errors.

Stork said the goal is to always sweep, but he overall thought the team played well.

“Every match is a must win and UCR was next,” he said.

Overall CSUN’s defense was no slouch. They held UCR to a team .169 attack percentage.

Stork said the team continues to improve their ability to block, and the team totaled 12.5 team blocks.

Kaul attributed the improvement in blocks to the coaching staff’s scouting ability. Heading into the match, she said the Matadors knew UCR’s reputation, which led to the feeling that the match would be easy.

However, Kaul complimented the talent of the UCR team and said the second set served as a reminder to, “stop fooling around.”

The senior said this is type of win which can help the team improve as they round out conference play.

“Coming off two losses, this win can help us find our groove,” Kaul said.

The Matadors continue their home stand, Saturday Nov. 1, against the Long Beach State 49ers(18-4, 8-0) who currently sit in first place within the Big West Conference.

CSUN traveled to Long Beach on Oct. 4, which resulted in the Matadors losing the first outing against the 49ers.