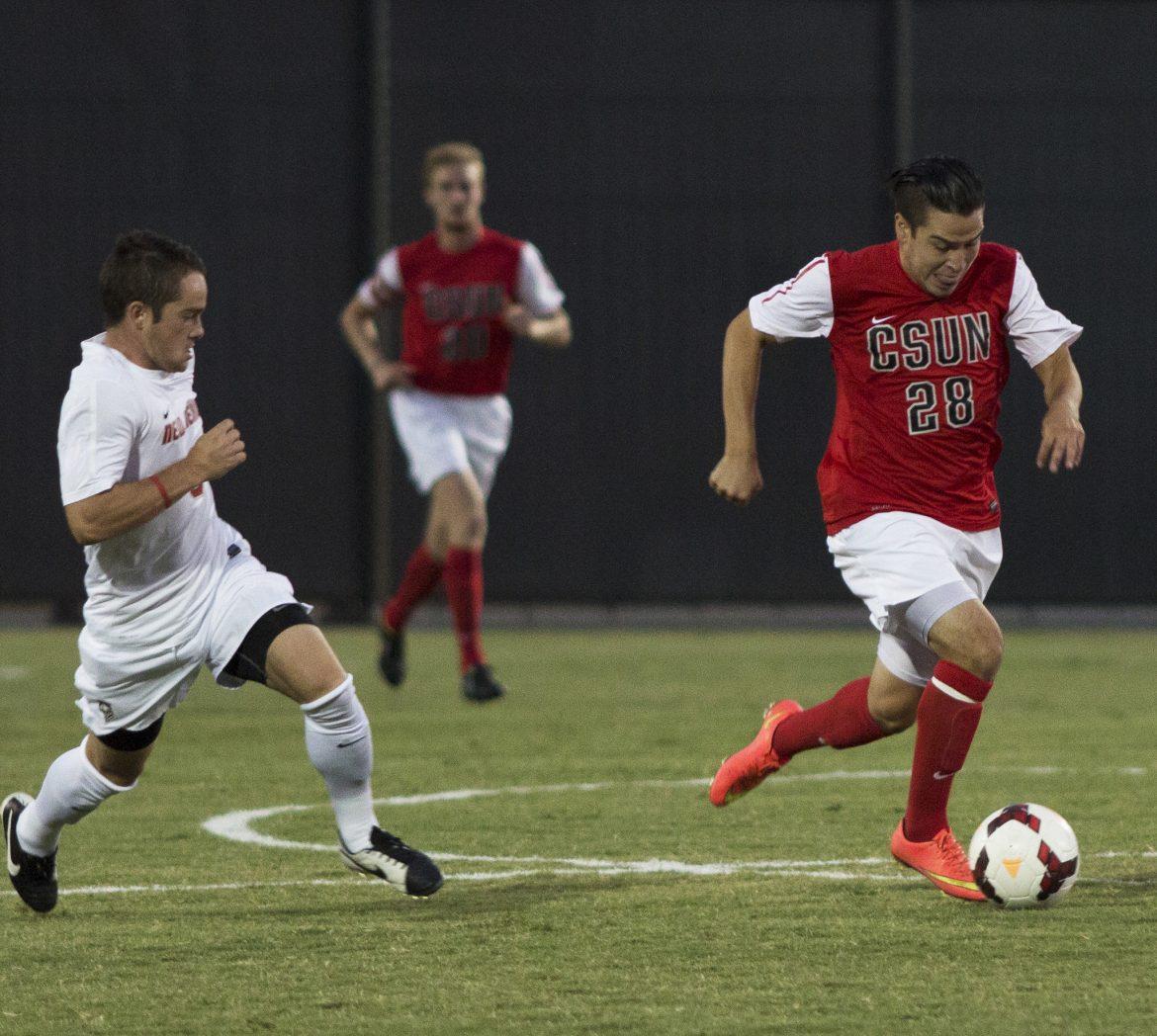 After a disappointing shutout loss to Cal State Fullerton, sophomore defender Patrick Hickman opened up the scoring before senior forward Sagi Lev-Ari scored a brace to give the Matadors (6-8-2, 2-4-1 Big West) a 3-0 win against the No. 3 UC Irvine Anteaters (11-3-2, 3-3-1 Big West) at Anteater Stadium.

Hickman scored the game’s first goal from a throw-in from sophomore defender Gabe Robinson, before Lev-Ari scored his 40th and 41st career goals to shutout the Anteaters in CSUN’s second road game.

“This is how you win games,” Lev-Ari said, who became the fourth player to score 40 career goals in the Big West. “We have to work hard to make it to the NCAA Tournament, and I’m glad I scored twice today.”

Despite having a scoreless first half, both teams were on the offense and had opportunities to open the scoring. Lev-Ari and senior forward Edwin Rivas were caught offside multiple times, proving that the Matadors were hungry to score at anytime.

About 20 minutes into the game, junior goalkeeper Adam Hobbs made two brilliant saves from a UCI free-kick. The ball dipped just below the post, but the goalkeeper hit it to keep it out of the net, only to have it land in front of an Anteater. UCI took the shot for what looked like a for sure goal, but Hobbs quickly got off the ground to punch the threat away, a display that amazed head coach Terry Davila.

“The team did well defensively, but Hobbs’s save kept us in the game,” Davila said. “He made a miraculous save.”

In the 35th minute, junior defender Trevor Morley was fouled in the box by the goalkeeper and gave CSUN the opportunity to go up front. The captain darted toward goal and the goalkeeper came out to stop the attack, only to trip him and give up the penalty. Junior midfielder Marino Peixoto was up for the spot kick and had a chance to make it his third goal of the season, but the winger struck his shot high, bouncing off the woodwork and out in the clear.

The second half began with an immediate attack from the Anteaters, but the match didn’t get its first goal until the hour mark as Hickman scored his second goal of the season to give CSUN the lead.

“We work on our set pieces, so we knew our roles. I did mine and ended up scoring,” Hickman said.

Hickman alongside captain Morley were rock solid in the defense, shutting out any attack Irvine brought to the table.

“The whole week we talked about playing physically hard,” Hickman said. “We worked as hard as we could for this game.”

The Matadors were in control from then on, with constant triangle offense combinations between sophomore midfielder Shane Steffes, Lev-Ari and Rivas. Lev-Ari would eventually score off his own rebound and doubled the Matadors’ lead, before knocking in the match’s third goal two minutes before full-time.

CSUN will travel to Riverside Wednesday evening to face the UC Riverside Highlanders, hoping to grab another win before going back home to face the Anteaters again. Coach Davila will look to inspire his team to another road victory.

“We have to have heart and play hard to win games,” Davila said. “We got to compete. The hardest day is game day.”