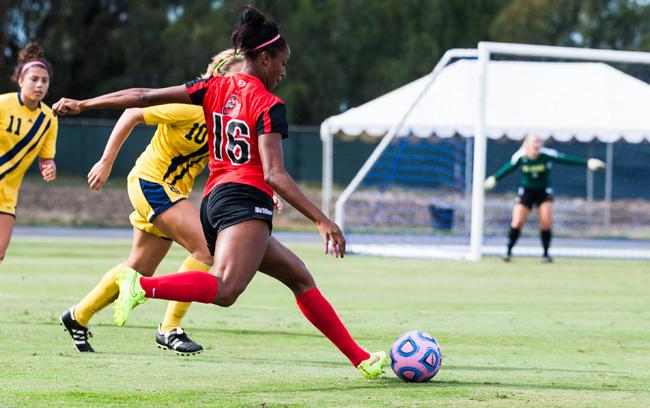 Leandra Walker gets an assist in the second half off of Camille Watson's goal, to give the Matadors a 3-2 lead. Photo credit:Kelly Rosales/ Contributor

The match proved close between CSUN and UCI as both teams battled back and forth in points.

The first half saw strong attempts by both sides with 2 back to back goals near the end of the half to tie things up at 2-2 going into the second half.

UCI went ahead early in the 11th minute with a goal from Laura McGrail off a rebound in the Matador box. The Matadors responded in the 21st minute with a goal from Hobson that she rebounded off a free kick. Tied up right before half, UCI’s Garret slid in another point off a cross putting the Anteaters up 2-1. The Matadors responded quickly with Norkus lofting in a shot over UCI goalie Jenn Randazzl to tie up the score.

The second half saw the Matador’s jump ahead in pint for the first time with a goal for in the 59th minute. Leandra Walker received a cross in UCI territory and redirected towards center cage to find Watson. Watson saw the opportunity and chipped the ball over the UCI keeper putting CSUN up 3-2.

UCI responded with a goal off a header by McGrail to tie up the score before the final whistle.

The first overtime period proved fruitless for both squads who were still tied 3-3 going into double overtime. The second overtime period looked to end the same until UCI’s Garret scored her second goal of the match with 2 minutes and the win.

Now with 12 points in the Big West Conference the Matadors are still within reach of the championship berth despite their last two road losses. Sitting fourth in points behind Cal Poly(15 points), Long Beach State (14 points) and Cal State Fullerton (14 points) the Matadors need to pull out a win against upcoming opponent Hawaii to keep them in the running.

The Matadors look to keep their Big West berth alive in their last home conference at Matador Stadium Sunday November 2 against Hawaii at 2 p.m.

CSUN will also be honoring seniors Leandra Walker, Brittanie Sakajian, Melissa Lopez and Hannah Wissler who will be playing their final home game for the Matador squad.