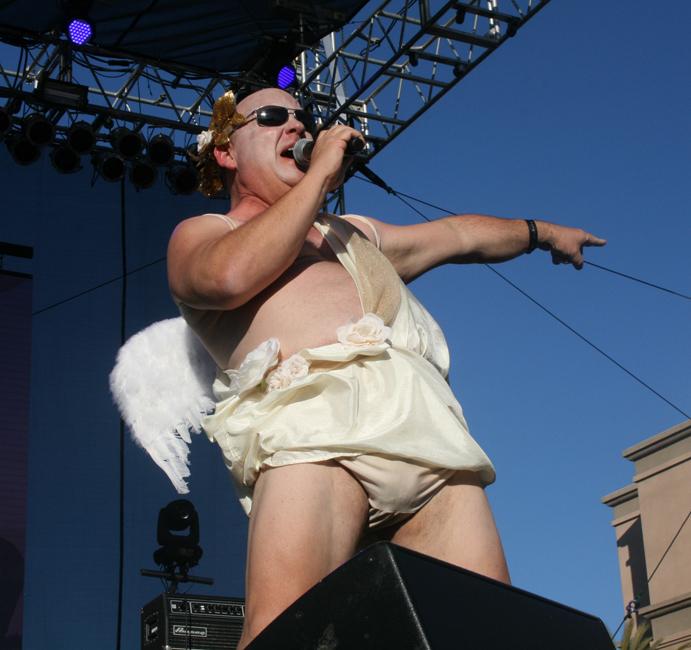 The Kyle Grass Band performed in costumes at the Franken Stage setting the mood for Tenacious D at Festival Supreme on Oct. 25. at the Shrine Expo Hall and Grounds. Photo Credit: Rasta Ghafouri/The Sundial

Back for its second year, Tenacious D’s Festival Supreme brought together some big names from comedy and music Saturday for an all-day event. The festival took over the Shrine Auditorium & Expo Hall as well as the grounds in front of the venue. While it’s been dubbed the “Coachella of comedy,” music acts also featured prominently. Two stages were set up outside where acts such as the Eagles of Death Metal, the Aquabats and the Tulsa Skull Swingers performed 30-minute sets for throngs of fans.

Inside the auditorium, comedy was king as stand-up comedians such as Norm MacDonald, Margaret Cho and Eric Andre took the stage. There was no assigned seating, but most people waited until after a comedian’s set to leave or enter the auditorium.

During one moment, the house lights came on briefly as comedian Arj Barker took the stage. “I really wish I hadn’t seen everyone leave as I came out here,” he said as the audience laughed. Barker shared what it’s like to be an older single man without kids. “My friends ask me, ‘Don’t you want kids?’ and I often lay in bed and wonder, ‘Why? Why am I sleeping so soundly?’”

Comedian and marijuana advocate Doug Benson also performed a great set for the audience. “I’m about a 7.4 on the high scale right now, out of a 7.4,” he said. Benson, who has an upcoming Netflix special, said he wasn’t going to tell any of the jokes from the special. Instead he told some from 2008, which were a bit dated, but still funny. He ended his set by telling the crowd to stay safe since alcohol was being served. “Take an Uber home, or walk, it’s a great neighborhood,” he said.

Natasha Leggero shared her views on Lyft and Uber. “They give people who live in their cars a chance to work from home,” she said. Leggero also shared her views on hipsters and their hero, Ernest Hemingway. “If Ernest Hemingway were alive he would beat up every hipster,” she said as the crowd erupted with laughter. Another comedian, Kumail Nanjiani, played a game with the crowd called “Literature or Twitter?” where he asked the crowd to tell the difference between a tweet and classic literature. Some were obvious, such as “surrounded by MILFs at Taco Bell.” Others not so much, like “How can mirrors be real if our eyes aren’t real?” “That one was tweeted by Jayden Smith,” Nanjiani said, “Will Smith’s son thinks mirrors aren’t real apparently.”

The adjacent Expo Hall was a feast for the senses as it was turned into the Circus of Death, where guests could ride artistic renderings of a carousel and a ride-on train which looked like it came from Travel Town at Griffith Park. As the train made its way around the hall, it passed a haunted forest, a windmill and a bounce house shaped like a church, complete with women dressed as schoolgirls jumping inside.

There was also a small stage which made for more intimate performances than the 6,300 seat auditorium. Among the acts were the Haden Triplets, who dressed like Corpse Brides and sang some hauntingly beautiful songs. Other interesting touches included a group of performers that wore stilts and grotesque masks. They interacted with the crowd and even danced to the music.

The performers weren’t the only ones wearing disguises, however. Since the festival was so close to Halloween, guests were encouraged to come in costume. The Blues Brothers, The Dude and Bob Ross were just some of the creative costumes attendees wore.

While many fans came to see Tenacious D, Kyle Gass entertained the crowd with his band, the Kyle Gass Band. Gass, dressed as cupid, belted out tunes such as “Man Child” and “Questionable,” which got the crowd riled up. “Questionable” even included a recorder solo by Gass.

Tenacious D took the stage toward the end of the night to raucous applause. Jack Black thanked the crowd for attending, and along with Gass performed “Tribute,” “Pick of Destiny” and “Rise of the Fenix.” They were briefly joined on stage by Weird Al who came prepared with his accordion.

SNL alum and Portlandia star Fred Armisen flexed his musical muscle by singing a few folksy songs. But Armisen didn’t forget his roots. He bragged to the crowd that he could speak in any type of accent and asked the crowd to shout out cities and countries. Armisen executed accents from Venezuela, Bolivia, Russia, Minneapolis and Baltimore. One audience member then shouted Los Angeles, as a reference to Armisen’s recurring SNL sketch “The Californians.” “To do a Los Angeles accent you have to pronounce every consonant,” he said.

Cheech and Chong performed a few musical and comedy sketches including, “Basketball Jones,” “Mexican Americans” and acted out a hilarious scene from their first movie, “Up in Smoke.”

Other memorable performances included the “Workaholics” guys rapping while dressed as wizards and the cast of cult classic MTV show “The State” reuniting for the first time in more than a decade.

Closing the event were metal band Dethklok from the animated series “Metalocalypse.” The band played while scenes from the show played behind them. A riff on the Heavy Metal genre, this was perfect way to end an event devoted to music and comedy.

Like any big music event, the major downside was the amount of people. Acts alternated at the outdoor stages, the idea being you could walk back and forth and not miss out on any of the acts outside. However, as the night went on many attendees couldn’t move or simply didn’t want to risk missing out on their favorite performer and just waited at one stage.

Overall, the event was a perfect celebration of comedy and music. The schedule had many different and diverse acts. Even the most discriminating comedy or music enthusiast could find a few performers that they were interested in. Food trucks were available to feed hungry patrons and there were bars set up all over serving beer and mixed drinks, too.

The Shrine was a beautiful venue for this event. The Moorish architecture added a perfect amount of beauty and macabre. When walking from the Expo Hall to the stages, the hallway lit up with Morrocan-themed lanterns and decor. These small touches added to the overall feel of the event.
Jack Black and Kyle Gass brought together the forces of music, comedy and art to put on an awesome and perfectly titled show. Festival Supreme will keep rockin’ for years to come.