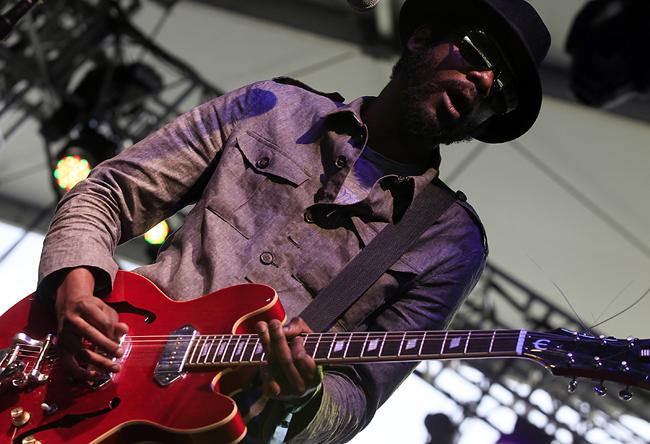 It’s another Monday, which means it’s another week to bear through. Luckily enough, the Sundial is willing to brighten your week up with a number of fresh tunes in our new segment – The Sundial Songs of the Week. This edition will feature five songs ranging from R&B to electro-pop, including a track from Chance the Rapper to carry you through the long, grueling week. Other tracks include a new record from Sway Clarke II, a song off SBTRKT’s new album, and a bluesy, hard-driven live performance from Gary Clark, Jr. Lastly, we’ll be premiering a new single from New York City-based artist, Dominique.

Toronto just keeps producing the best musicians. Recently featured on Zane Lowe’s BBC One Radio, Sway Clarke II caught listeners attention with his upbeat, Elton John-esque track  “Secret Garden.” Now with a new and more somber song, Clarke is showing his Frank Ocean side, and it’s fantastic. Great producing and songwriting, this song is one to keep on repeat.

Chance the Rapper – No Better Blues

The Chi-Town rapper has been doing a college tour for the last month, and somehow has enough time to release a new track. “No Better Blues” is reminiscent of “Acid Rain” with its melancholic beats, and his witty, relatable and free-flowing lyrics are, again, top-notch. What more can anyone expect from Chance?

Dominique – It’s Only You

The New York City-based artist’s original debut track reminds you of Lauren Mayberry and the gut-wrenching beats of electro-pop band Chvrches. The verse has an M83 feel to it, and the 21 year-old’s vocals are absolutely dreamy. Check out the song on her soundcloud, and expect her EP “Chains” to come out soon.

Off of his new album Wonder Where We Land, SBTRKT’s new record is haunting and eerie, but the metronome-like beat is just so addicting, it keeps your foot tapping. The melody from Denai Moore is just perfect for the song, and is much like Beyonce on Watch the Throne’s “Lift Off.” If you’re digging the song, check out his new album on his website http://sbtrkt.com/stream/ for free.

Gary Clark Jr. – When My Train Pulls In

This established blues-rock artist is something fans of vintage Black Keys or Jimi Hendrix would love. Clark’s vocals remind you of a younger Dan Auerbach, and this live version of the song takes you back to Hendrix’s set during Woodstock 1969. If you want your socks to get rocked off, check the song out and the rest of his soundcloud discography, which includes two of his songs written for the movie, 12 Years A Slave.

That’s it for the 1st edition of the Sundial Songs of the Week. Stay tuned next week for another set of music to enlighten your week and encourage you to pull through!