Enter if you dare: LA’s most popular haunted spots 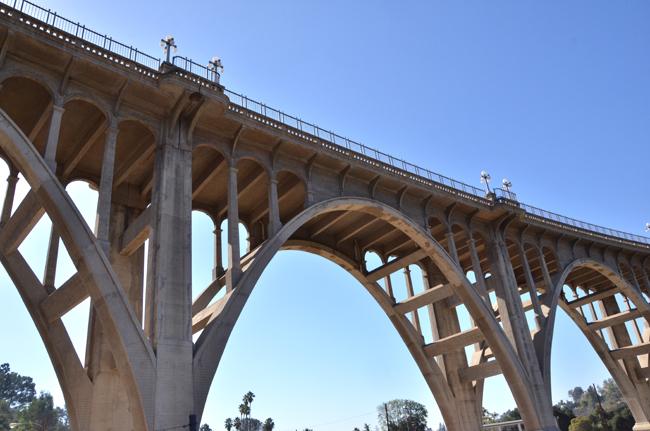 A Pasadena bridge along Colorado Street over the Aroyo Seco river bed is known as "Pasadena's Suicide Bridge". Ghosts on and under the bridge have been seen along with strange noises. Photo Credit: Vince Nguyen/ The Sundial

With Halloween on the horizon, satisfy your seasonal appetite for the occult with one of these local haunts.

When Jeannette Pykkonen returned to Pasadena to celebrate the 1993 reopening of the Colorado Street Bridge, she was returning to a place her mother never intended her to leave.

In 1937, Pykkonen’s distraught mother flung her from the bridge in a mother–daughter suicide attempt that only the claimed the mother.

The spirit of her mother, Myrtle Ward, is said to now haunt what has since become known as Suicide Bridge after facilitating the end of an estimated near 80 during the Depression.

Since its 1913 opening, there have been over 100 people who have used the bridge to take their own lives.

In early 2008, a man suspected in a Tujunga stabbing death of his son’s mother and maternal grandmother, made his way to the bridge shortly after the alleged incident and committed suicide.

A spirit roaming the depths is rumored to whisper, “her fault,” to all who listen.

“It just can’t be explained. You’ll hear voices and footsteps,” said Adam Knoedler, founder of Pasadena-based The Supernatural Investigation Unit. “You’ll think you’ll see something, but it’s not there. You know the history of it but it’s a mysterious place as well.”

Hiking amongst the beautiful botanical gardens in Griffith Park, it’s easy to get lost in the aura of such pleasant surroundings. What many tend to overlook, or perhaps even avoid, is the site of the Old LA Zoo where numerous accounts of paranormal activity have been reported.

In 1916, health officials contemplated the zoo’s closure after discovering that its sewage drained into the Los Angeles River.

That same year, the zoo was forced to euthanize several animals after health officials discovered they carried the fatal and highly-communicable disease, Glanders.

Since its closure in 1965, there have been numerous and ongoing sightings of deformed and mangled animals on the grounds.

Pet psychics are known to frequent the Old Zoo, believing they can ease the distress preventing some animals from fully passing over.

All of Griffith Park, including the Old Zoo,is believed to have been cursed by the niece and supposed heir of former owner Don Antonio Feliz after the land, then known Rancho Los Feliz  was denied to her upon his death.

The curse left by Dona Petranilla on Griffith Park has since been blamed for the grounds’ various misfortunes and is thought to have driven Griffith to madness.

Less than 4 miles north of the The Suicide Bridge is Devil’s Gate Dam. The dam was built in 1920 to prevent torrential flows from the San Gabriel Mountains from flooding northeastern Los Angeles.

The rock formation below the dam exhibits an unnerving resemblance to a horned side portrait of the devil.  The steel gate, part of the dam apparatus, is believed to be a spiritual transit point. Some go as far as labelling it as one of the Seven Gates of Hell.

Some believe that this phenomena was man-made.

It is widely believed that, joined by many from his secretive Thelemite religious order (Ordo Templi Orientis) he frequently practiced the occult in the area.

According to popular theory, their pursuit of the occult was so aggressive that it triggered a convergence between the two worlds.

The theory was temporarily bolstered by the mid 1950s disappearance of four children within a year that were all last seen in areas near the dam.

Serial killer Mack Ray Edwards, later confessed to the murdering of two. The whereabouts of the other two remain unknown.

The Demon’s Gate is also thought to drive spiritual activity throughout the region.
“Pasadena’s haunted triangle involves the Colorado Street Bridge, the Enchanted Forest/Cob Estate and the Devil’s Gate Dam,” Knoedler said. “If you look at these on a map, and you take a ruler and pinpoint them, it makes a triangle that points to the dam. The bridge and the forest both point to the dam. There’s a connection.”