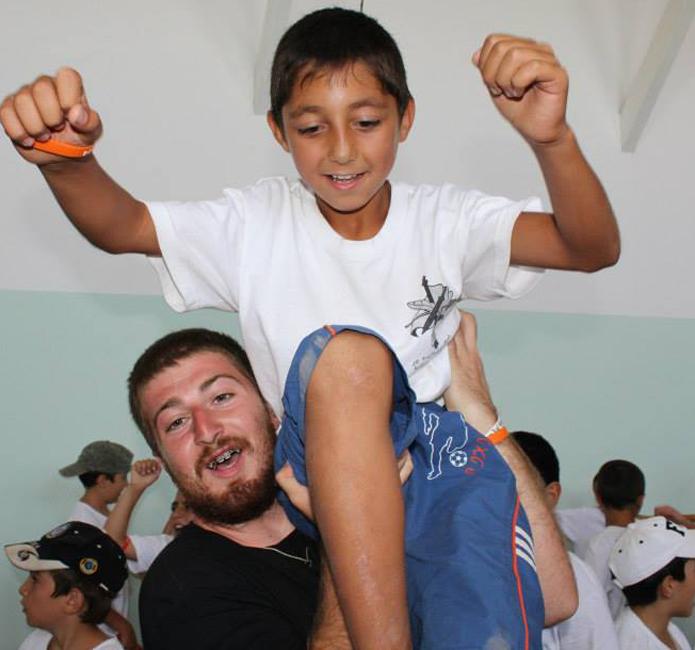 Dickran Khodanian, 21, senior, history major, volunteering this past summer at a day camp in Proshyan, Armenia, with the AYF Youth Corps program.

Khodanian, 21, a history major with a minor in Armenian Studies, often heard his grandparents telling him stories. These were stories about their childhood, their parents and about their people.These were stories about deportation, starvation, rape and death. Stories about people being forced out of their homes, about an entire population being marched through the Syrian deserts with no food or water, mass burnings and drownings that wiped out hundreds of lives at a time.

Nearly a century later, Khodanian continues to feel the effects of the Armenian Genocide of 1915. “It affects me today because I am part of a large group of Armenians that live outside of Armenia,” he said. “I was born and raised in Los Angeles instead of my ancestral homeland because of the genocide.”

Khodanian now serves on the CSUN Armenian Students Association (ASA) Executive Board. As the ASA’s cultural director, his job is to plan events throughout the year in order to educate students about the Armenian culture through events that highlight the culture.

“The Armenian Students Association was created in order to foster an environment that celebrates the rich Armenian history and culture,” said Christine Dashdemerians, ASA president. “The CSUN chapter of this organization holds a unique responsibility, since this university houses the largest Armenian collegiate student population in the United States.”

Dashdemerians said she is proud of her ethnicity and loves how the Armenian culture has contributed to the diversity on CSUN’s campus.

“ASA is my way of giving back to my homeland and my ancestors while also bringing awareness of this beautiful culture to my peers,” she said.

During this time in history Khodanian refers to, over a million and a half Armenians were killed by Turkey’s Ottoman Empire, during what is considered to be the first genocide of the 20th century. However, Turkey denies the genocide to this day, blaming the casualties on World War I activity.

Khodanian’s great-grandparents were from the Marash region of Western Armenia. When they heard about the massacres taking place across the Ottoman Empire, they took their five children, gathered their belongings and started their journey towards the Syrian border where they sought refuge.

Along the way, all five of the children were separated from their parents and, eventually, only one of them survived the harsh conditions of the march through the desert. A few years later, the parents found their child at an orphanage near the Syrian border.

The family settled in Lebanon, and the parents had five more children, one of which was Khodanian’s paternal grandmother. Khodanian’s parents later immigrated to the United States before he was born.

Off campus, Khodanian is a member of the Armenian Youth Federation (AYF), a grassroots non-profit organization “committed to the moral, social and intellectual advancement of Armenian youth,” according to the organization’s mission statement.

Khodanian is part of the San Fernando Valley chapter of the organization and helps plan events, such as the Cycle Against Denial, an annual bicycle rally to raise awareness of the Armenian Genocide, and the AYF’s annual protest in front of the Turkish Consulate in Los Angeles on April 24th, the day Armenians commemorate the genocide.

“We strive to mobilize the Armenian youth and be involved in our communities through various programs and events,” said senior Arpa Hatzbanian, 22, chairperson of the Armenian Youth Federation. “We’ve all heard our great-grandparents’ and grandparents’ stories of the genocide and that just drives us to keep working for our cause.”

Khodanian also works on the AYF’s Special Needs Basketball Program, a free program offered to children in the Armenian community with special needs.

“I try to stay involved with other Armenian youth in order to establish strong community ties so that our history, culture and traditions remain in good and strong hands,” he said.

This past summer, Khodanian took his activism abroad to Armenia, where he volunteered in the AYF’s Youth Corps program. For six weeks, Khodanian and 24 other volunteers from across the United States hosted day camps for underprivileged youth in five villages across Armenia and the Nagorno-Karabakh Republic.

“Youth Corps gave me the opportunity to work hands-on with the youth in Armenia, to teach them English and give them a fun place to spend their summer,” he said. “I also got to experience my homeland for what it’s really worth and I fell in love with it.”

Khodanian is an active participant in his community and a determined activist for genocide recognition. This in turn also means a much-needed recognition of his story.

“My family’s stories serve as a constant reminder to me of what happened almost a hundred years ago, and what should be done today in order to preserve our Armenian culture, history, heritage, and to keep our family’s traditions and stories alive,” said Khodanian. “Those stories are what inspire me to remain active in my community, on and off campus.”