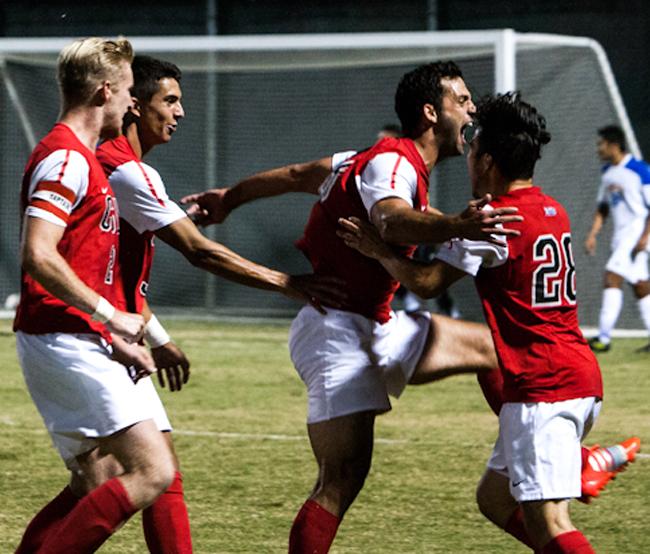 Sagi Levi-Ari scores a goal with assist by David Turcious during 2-1 win against UC Riverside. Their performance against UCR shows they are better than their win and loss record. Photo Credit: Kelly Rosales/Contributor

With the remarkable 3-0 win against No. 3 UC Irvine Anteaters over the weekend, the Matadors look to be hitting their stride at just the right time. With a 6-8-2 overall record and a 2-4-1 Big West record, it’s time to reflect on the men’s soccer season thus far, with only three games left in the season to play.

If you look at the record and the roster, you would think this side should perform a lot better. But to say this Matador team is worse than their Big West Conference winning side from last season, is absolutely absurd. It’s not to say they have played terribly either, even if a loss is a loss. They’ve been playing fairly well enough to stay in every game, but some opportunities have slipped away from them.

The offense has been struggling to score, but that’s not to say the lack of goals is due to an underperforming set of strikers. The strikeforce of senior forwards Lev-Ari and Edwin Rivas, freshman Martin Arrieta and junior David Turcios, among others, is definitely a set of players to be feared. The thing is, they’ve come up against goalkeepers who are just in super hot form.

Take for example their game against Sacramento State. The strikers, and even the wingers, had pristine opportunities to score, but the Sac State goalkeeper was just on fire with saves left and right. They’re good on positional awareness, but they just need to capture their killer instinct.

The midfield isn’t terrible either. They’ve done the right things to set up the strikers and control the ball. With wide players in juniors David Turcios, Marino Peixoto and Carlos Gonzalez, and young sophomore Nicolas Camacho, the Matadors have the right and skilled players to drag opponents out to the flanks and give room for the strikers. Central midfielders like the veteran senior Yarden Azulay, sophomores Juan Samayoa and Shane Steffes, have controlled the ball like good box-to-box midfielders should be doing.

The midfield has been caught asleep several times, however, like their 1-0 loss to the Cal State Fullerton Titans. The players were getting bullied off the ball in the first 20 minutes and were punished for it with a goal. Not until the second half did the midfield do a better job in keeping the ball and breaking down their opponent’s plays. The players looked a lot more lively against the UC Irvine Anteaters too, with the wide players not hesitating to take the leap forward and causing trouble to the defense. Confidence is the key strategy that will prevail in the next few games.

The defense conceded a number of goals, but they have been tight in the back for the majority of the season. The most goals they’ve conceded the entire season was in their 3-0 loss to UCLA. A handful of 1-0 and 2-1 games were proven to be defensive slumps as well, but the players have been solid to keep junior goalkeeper, Adam Hobbs, untested around the goalpost.

Team captain and junior defender, Trevor Morley, has been an absolute rock on the back. His partnership with sophomore Patrick Hickman, has improved as the season progressed, with clinical understanding of man coverage and closing down spaces. Fullback sophomores, Pol Schonofer Bartra and Gabe Robinson, junior Victor Vasquez and senior Mynor Giron have proven themselves defensively and offensively going forward. All are great at crossing, and Robinson, in particular, has a throw-in strength of Zeus himself, accumulating most of his assists through his long throw-ins. If the defense needed any improvements for the last few games, they should focus on set pieces and counterattacks. Most of their goals have been from counters or from corners and free kicks. Their 3-0 win over the weekend showed they were able to defend both and do it well.

Goalkeeper Adam Hobbs, has been exceptional and has proven he’s been the right first choice all season. His athleticism and vision for the ball has been magnificent, and if it wasn’t for minor mistakes, Hobbs would deservedly be No. 1 in the conference. Time and time again Hobbs has saved some intense shots, much like Tim Howard for the U.S. Men’s National Team.

Lastly, let’s not forget the coaching staff. Head coach, Terry Davila, has been at the helm for nearly 20 years, and his portfolio is quite impressive. If he was able to create a Big West winning squad last season, he’s able to build one again.

As the Matadors look to improve on their weekend win, they should hope to improve and tweak up every department. Their four-game losing streak was surely a wake-up call, and to make it to the Big West tournament, they will have to bring UC Irvine form into all of their final games.